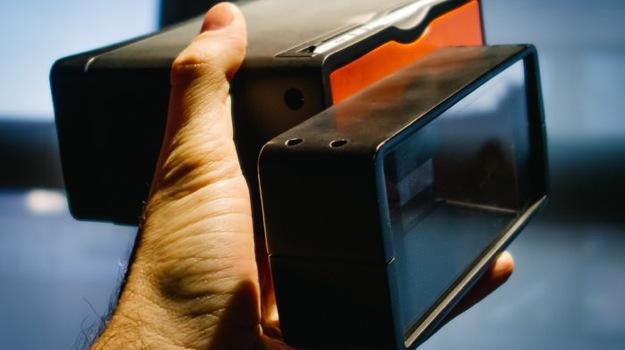 Forget about the Apple versus Android war for a second and just look at the iPhone has an innovative piece of technology. At the core, we can all agree that its capabilities to make calls, play music, connect to the Internet, enable thousands of apps for different purposes, and take 3D photographs are pretty great. What’s that? You didn’t know iPhones could take 3D photographs? Clearly, you haven’t discovered Poppy.

Poppy is a device that can turn your iPhone – as long as it’s an iPhone 4, 4S, or iPhone 5 (fifth generation iPod Touches will also work) – into a 3D camera capable of capturing both still photographs and full-motion video. How it works is simple: Inserting your iPhone into the device allows the phone’s camera to capture two stereographic images via mirrors contained within the Poppy. This essentially splits the camera’s eyes so that it records two different images at once.

When you look through the viewfinder of the Poppy device, the lenses combine both of those images into one 3D image, whether it’s video or a still photograph. Essentially, it’s a modernized version of the classic Viewmaster stereoscope viewer, except that this time, you can take the images yourself. Which is, let’s be honest, more than a little neat.

The Poppy isn’t available just yet as it’s the subject of a Kickstarter campaign by creators Ethan Lowry and Joe Heitzeberg in Seattle, WA. In just nine hours after the project launched, Poppy raised all $40,000 of its original goal and have exceeded twice the amount requested in two days. On the campaign page for Poppy, Lowry and Heitzeberg cite the Viewmaster as an inspiration, as well as the 1800s stereoscopic devices that in turn inspired the creation of that childhood favorite.

“We love the feeling those simple devices give of stepping into another world,” the pair explain, “but they were all about seeing someone else’s photographs. Wouldn’t it be so much better if you could create your own immersive 3D scenes like that – but in full-motion video – and share them with friends and around the world over the internet?”

Poppy may be a hit with the crowds in its early stages, but its creators aren’t laying on their laurels; they’re already considering future possibilities and additions to the device. Some ideas include allowing other developers to create augmented reality apps that could use true 3D visuals for the first time, or other outside apps taking advantage of Poppy’s 3D capabilities.

If all of this sounds like something you’d want to try out for yourself, all it’ll cost you is $39. That’s the level of pledge that will guarantee a Poppy from the first production run (due before the end of the year). All things considered, it sounds like a pretty great deal.

Video-editing app LumaFusion to get a Galaxy Tab S8 launch
Three things the Microsoft Surface Duo 2 needs to succeed
Apple iPhone 13 buying guide: Release date, price, specs — everything we know
This tech was science fiction 20 years ago. Now it’s reality
The best solar chargers for your phone or tablet
Why are so few people actually using 5G in the U.S.? Here’s what the experts say
5G-enabled billboard in Times Square briefly brings interactive game to masses
Sustainable with Google 2021: Nest Renew, traffic light efficiency, and more
The 20 most outrageous and fantastic James Bond gadgets of all time
AirPods 3 could finally debut at Apple’s Unleashed event on October 18
Scientists think the next big solar storm could create an ‘internet apocalypse’
Need a last-minute Halloween costume? Check out these 3D-printable getups
Siduri Wines blends wine and tech in the ultimate sweepstakes experience