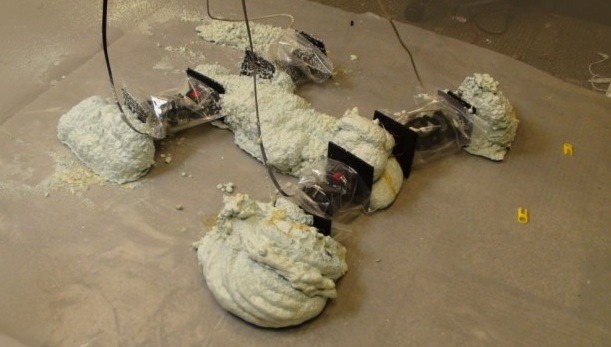 Shai Revzen and his team of researchers at the Modular Robotics Laboratory of University of Pennsylvania (MODLAB) have created the Swiss Army knife of robots: a rolling Foambot that synthesizes new foam-bodied robots on-the-fly to meet challenges from a changing environment. It’s no T1000, but still a little terrifying.

Contrary to the glamorous functionality which the media has portrayed robots as having, like C-3P0 or Adams’ Marvin or Johnny 5, real-life robots are typically designed to do a specific task. That’s fine unless your robot is being thrust into environments, such as disaster recovery or planetary exploration, where the demands require design adaptability for unanticipated tasks.

That’s how the MODLAB team is pitching their idea. Adaptable, as well as cheap. They use something called foam synthesis. The Foambot, a small moving platform constructed for the Mini-PR2 robot, packs off-the-shelf insulation foam and clusters of actuators and microcontrollers (robot joints).

The clusters consist of a row of three CKBots, and attached to either end of the clusters are 5cm bolts. The operator directs the Foambot to deploy the clusters, moving the modules in the right spots for the desired robot design. Then using a laser pointer guided foam nozzle, it sprays the self-hardening foam to connect the clusters and create joints and a body.

So far the MODLAB team has used Foambot to make a foam wormbot and a quadruped which may be modeled after a katydid. Once the progeny is assembled and the foam is dry, the wheeled robot uses onboard software to make its creation dance.

The team points out that the Foambot itself can be used to dispose of hazardous material like broken glass or needles. The foam can also be used in practical ways during fire-fighting or hostage rescue situations.

Topics
Exoskeletons with autopilot: A peek at the near future of wearable robotics
The latest wild idea for space exploration? Robots made from hunks of ice
Open-Source Leg: The quest to create a bionic limb that anyone can build
Robots Everywhere: Robots in space exploration
The best light therapy lamps
CES 2022: The biggest news and announcements so far
Taco Bell’s Xbox Game Pass-style pass will put a taco in your belly daily for $10 a month
The weirdest tech we spotted at CES 2022
K-pop NFTs are here, but I’m not convinced they’re worth it
Solving VR’s ‘infinite walking’ problem with moon boots
Fighting football injuries with 3D-printed, hyper-personalized pads
Inside the U.K. lab that connects brains to quantum computers
ClipDart is an on-demand barber app aimed at people of color