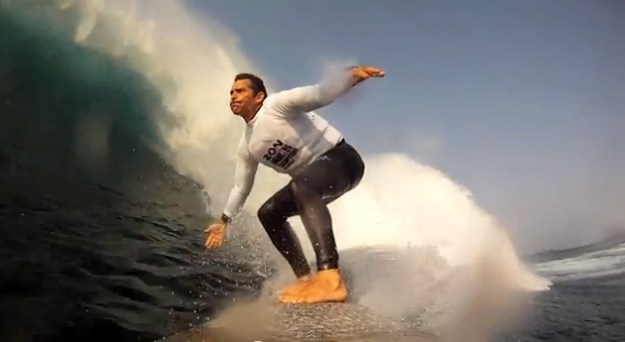 When it comes to taking on the really big waves, the last thing surfers want to do is expend all their energy paddling out to it.

The WaveJet jet-propelled surfboard has made it easier for surfers to get out to where the action is, with surfing supremo Garrett McNamara recently bringing it up against its biggest wave yet, a 45-foot monster in Nazare, Portugal.

WaveJet, which has been six years in development, is essentially a propulsion pod that can be fitted into surfboards, kayaks, stand up paddle boards and light boats. It can also be used while riding a wave, to provide extra thrust if needed.

The specially designed board, which is controlled by a device worn on the wrist, can hit speeds of just over 11 mph, dramatically cutting down on the time it takes to reach a wave using arm-power alone. It has a run-time of about 40 minutes thanks to its twin-lithium ion battery pack. It also does away with the need to buy or rent a jet ski, something many surfers use to get towed further out to sea, where the larger waves build.

If you become separated from the board while tackling a wave, the drive instantly shuts down so there’s no danger of the board pulling you along or under the water.

“The ride on this huge wave justified everything that WaveJet has sought to achieve with its awesome technology,” wave aficionado McNamara said of his experience in Portugal.

He added, “The ability to track down and get into that wave with the WaveJet propulsion pod locked into my board, and utilize the power as I rode through the wave, was incredible. It was so amazing to kick out and not have to paddle to get out of harm’s way and get right back to the peak to catch another wave.”

While many surfers may be interested in getting a WaveJet pod, the $4,000 price tag may prove prohibitive for some. For those who do have the funds, it should be commercially available in spring next year.

The video below shows McNamara in action on a WaveJet-equipped board.