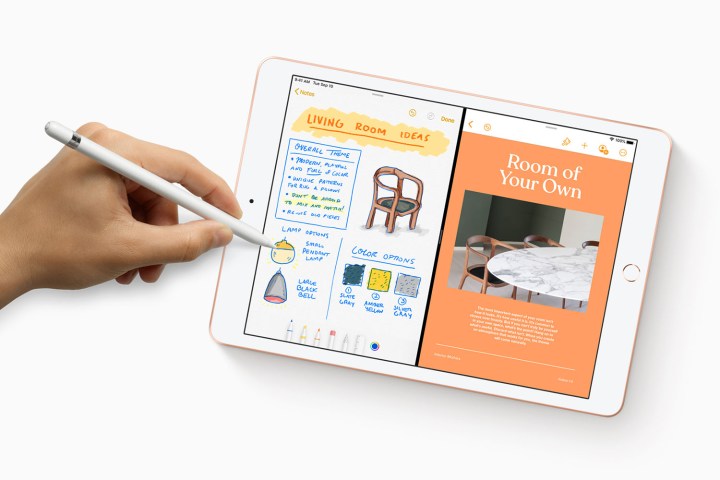 Well, that was fast. The new iPad isn’t even on store shelves yet, and Amazon has already put it on sale. The 128GB model in any color is now only $399, a savings of $30, and we think a better buy for most users.

32GB may sound like a lot of space, but you would be surprised at how fast you’ll fill it up. You already start a few gigabytes short thanks to iPad OS, and apps can eat up a lot of space in short order. With photos and videos on top of this, you might run short on disk space. The iPad sale isn’t the only surprise sale on new Apple devices: Amazon is also offering the Apple Watch Series 5 at a discount, which we’ve also just written about today as well.

The 128GB model should be plenty of space for most, especially those of us who might use our tablets more like a laptop. The new iPad is even more suited than ever as a laptop-replacement: in addition to Apple Pencil support, the redesign adds the Smart Connector previously only found on the iPad Pro and Air, and now a bigger 10.2-inch screen to boot.

The Smart Connector allows you to attach a keyboard to your iPad without having to pair or keep it charged. It’s a nice feature, as typing on the on-screen keyboard isn’t the most efficient input method. The A10 Fusion chip makes the new iPad quick and agile, and you’ll enjoy watching movies (and on November 1, Apple TV+ for a year) thanks to stereo speakers. The sound quality isn’t as good as the four-speaker iPad Pro, but it’s acceptable.

Amazon is currently allowing its users to pre-order the iPhone, but it hasn’t specified when it will ship. Apple’s website lists the new iPad as being available starting September 30, so Amazon will likely begin shipping not soon after that (as an aside, Walmart expects to have its first shipment arrive sometime in the first week of October).

Be sure to check out the deals there too, especially if you’re in the market for a smartwatch. Also, the iPad Air is also on sale for $30 cheaper than retail this week as well.