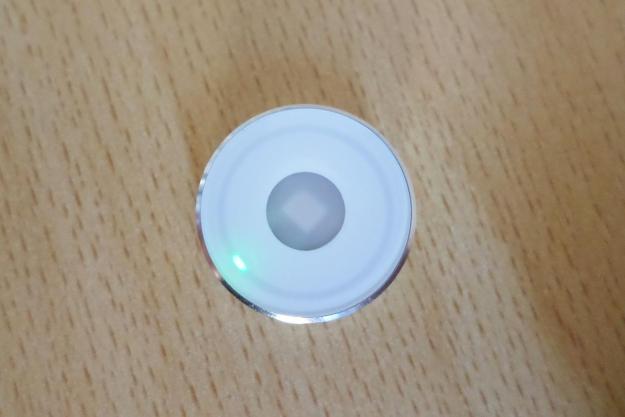 “After a successful funding campaign on Kickstarter, the Goccia - the world’s smallest fitness tracker - is here. It looks cool and wireless charges, but the software feels unfinished, and the tracking results are haphazard.”

The Goccia started its life as a Kickstarter project, where it amassed $63,000, beating its $50,000 goal. Initially slated for release in May, the fitness tracker’s estimated delivery slipped until late July, early August. The idea was to create a tracker that’s as unobtrusive as possible, yet still capable enough to ensure it could monitor all activities.

It’s also designed to be incredibly easy to use, with no buttons to press, no cables to plug in, and no complicated displays to fiddle around with. The tiny device has an unusual way of syncing with the app on your phone, and does so using an LED light to beam information through the phone’s front camera. It charges wirelessly, weighs next to nothing, and has a cool, futuristic style.

On paper, the Goccia sounds fantastic, and a product suitably different to the competition. We’ve been using it for a few weeks now, and this is how it has performed.

The round Goccia itself is tiny. It’s the size of a penny, the same thickness as an iPhone 5S, and weighs a mere 3 grams. We think it looks cool too, with its matte white face and neatly chamfered metal body, more resembling a button that fell off Luke Skywalker’s jacket than a fitness tracker. A set of green LED lights are set around the face, which depict progress against your goal, and can also show the time and whether the Goccia is charged up or not.

There are no buttons to activate the Goccia’s lights, which instead rely on the little device being placed flat on a surface to activate. This works surprisingly well, even when the Goccia is fitted inside the wriststrap option, provided you’ve had your arm in the air since the last time you checked. That said, there are no numbers on the face, and no way to tell which way is up, so telling the time is almost impossible.

In addition to the wrist strap, which comes in gray plastic with a matte metal mounting point for the Goccia, the deluxe pack also comes with a plastic clip to attach the Goccia to your clothes, and another matte metal clasp for wearing the tracker around your neck. No chain or cord is supplied.

The clasp is suitable for everyone, and is very subtle, but the necklace and wrist strap options have a far less masculine design than we’ve come to expect from a fitness wearable. On the wrist, it looks like a woman’s watch, and the necklace is much too big and shiny for most men to wear without feeling embarrassed. Far from being a bad thing, this is excellent news, given how few fitness wearables are designed with women in mind.

G-Wearables launched the Goccia with an iPhone/iPad app, and the promise of an Android app, plus something for Windows Phone in the future. It’s free to download from the iTunes App Store, and installed without a problem on our iPhone 5.

Syncing woes: However, the first version was a real pain. The Goccia syncs using an unusual method of positioning the tracker over the front-facing camera lens, so stored data can be zapped into the app. It cancels out the need for any cables, or a power hungry Bluetooth connection.

It’s good to see a fitness tracker with a design that should appeal to both men and women.

Getting the syncing to work was another matter entirely. The instructions were vague, and it was hit or miss whether the camera would recognize the Goccia. On more than one occasion, I gave up trying to sync it because there was no obvious trick to making it work.

A subsequent software update did clear things up, and provided better instructions for getting the Goccia and your phone to talk to each other, but it’s still not guaranteed to work. Provided you have some patience, and put in some practice, then syncing gets easier. However, it’s not as natural or convenient as using Bluetooth.

Otherwise, the app displays a daily breakdown of your activity, calories burned, and rest periods. Overnight, it keeps track of your total sleeping hours, and the time you spent in deep sleep. Tap each section and you get a pretty graph, plus a detailed breakdown of your activity, along with how you performed against your goal. A Trends section stores your long term activity, but the graphs are confusing and don’t really offer much additional insight.

For the first week, I wore the Goccia using the clip, and attached it to various bits of clothing. I also wore a Nike Fuelband, to see how the two matched up. There was a large discrepancy between the two. One day, the Fuelband said I had made just over 7,000 steps, while the Goccia thought I’d been much lazier, clocking me at 4,000. Oddly, they both had almost the same calories burned figure.

The pair rarely agreed with each other, until I put the Goccia in the wrist strap. This was far better, and saw the Goccia fall into line with the Fuelband’s measurements. Sleep was also tracked more effectively. Worn as a clip, the tracker was good at recognizing when I went to sleep and woke up, but because I work from home, I don’t always move very far, making the Goccia think I’d just go back to bed again. On one day, it thought I’d slept for more than eleven hours, when in reality, it was just over seven. It was less confused when I wore it on my wrist.

G-Wearables says the Goccia will recognize when you’re playing different sports, but there’s no way to force the change, and also no indication it has realized. For example, a lengthy session at the driving range didn’t make a “golf” section suddenly appear inside the Goccia’s daily roundup.

Goccia’s app is attractive, but it doesn’t offer the same at-a-glance convenience of Nike’s Fuelband app. The main data stream doesn’t emphasize your daily performance enough, and there’s no real sense of achievement when you meet a goal. The app has potential, but at the moment it operates like a stripped down beta version rather than a final edition suitable for everyone.

Wireless charger is the perfect choice

G-Wearables made a good decision about charging the Goccia, and has included a swish wireless charger inside the package. It looks like an oversized version of the tracker itself, complete with a funky glowing base, and a simple cutout on the top into which you place the Goccia. The LEDs light up while its on charge, and it takes around 30 minutes to max out the battery. In return you can expect about ten days use before it needs to return.

More for fashionistas than runners

The Goccia is a typical Kickstarter product. It’s a good idea, so it got funded, but then it suffered from delays, and the final version doesn’t meet with expectations. It’s close though. The hardware is attractive and technically impressive, but it’s let down by poor software and too little involvement for the wearer. Pressing the button on the Fuelband makes it feel like it does something, while the Goccia is a silent partner.

It’s good to see a fitness tracker with a design that should appeal to both men and women though, but because of the software’s shortcomings, it probably won’t be high on true fitness fanatics lists. The Goccia is too casual and unfocused, to be taken seriously by those who really want to monitor their activity on a 24-hour basis.

This isn’t really a negative point, but it does remove a large section of the market who may be interested in the Goccia.

If the Basis smartwatch is for serious athletes, and the Fuelband/FitBit/Jawbone UP! is for normal people, then the Goccia is for those who still think those wearables are too sporty, and would prefer their trackers to be more like a piece of jewelry. Form over function. But when a form this good, the Goccia could end up carving its own little niche in a rapidly growing market.

We need to see some serious software improvements before recommending it, and the addition of a more masculine wrist band option would be nice, even if its one in an alternative color. There’s potential in the Goccia, but it’s not there yet.