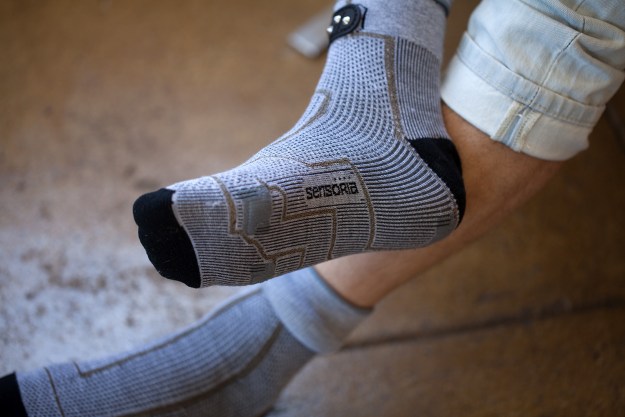 Sensoria Fitness launched with tank tops and bras pre-wired for heart rate monitors. It was a good idea. Many athletes, especially runners, are annoyed by straps around their chests, and Sensoria’s products relieved that pain.

But that was just the beginning of Sensoria’s connected-apparel plans. Now the company has designed a pair of smart socks with embedded textile pressure sensors on the sole along with magnetically attached anklets that capture running performance metrics, then transmit them to a connected smartphone via Bluetooth.

Will smart socks help lower your splits, or will they merely lower your bank balance?

At a glance, Sensoria’s socks look like any other low-top running sock. They differ in the technology that’s woven into the fabric. Sensoria’s socks feature three textile sensors built into the sole that can relay pressure information to the anklet. Near the socks’ upper cuff is a row of five stainless steel, cone-shaped magnets that interface with corresponding conical indentations on the Sensoria Anklets.

The anklets are sleek, modern half hoops of tech that look very much like a Nike FuelBand sliced in half. The anklets include one row of four LED lights perpendicular to the band that give visual feedback — flashing amber during charging, solid green when completely charged. Inside the anklet is a three-axis accelerometer that tracks cadence, pace, number of steps taken, distance, and speed, which it then relays to Sensoria’s Fitness smartphone app via Bluetooth.

Sensoria’s t-shirt with built in heart rate contact is a slim fitting, light compression tank with heart rate monitor snapped in at the center of the chest. The company’s heart rate monitor can connect to smartphones via Bluetooth and running watches or bike computers using Garmin’s ANT+ wireless communication protocol.

It’s in the smartphone app that all of the Sensoria magic happens. At the bottom of the app’s main screen are four menu items: foot view, a notifications page, activity status, and the virtual coach. The virtual coach, shown on screen as an attractive woman named Mara (look out Siri), can be set to speak every tracked metric in real time during a run. Mara can give a status update at a set distance (from every quarter mile to every 10 miles) or set time (from every minute to every hour). By using toggles it’s possible to custom tune exactly what information Maya includes in her updates: distance, duration, foot landing, pace, speed, cadence, calories burned, current heart rate, and heart rate zone.

Mara will also give feedback on running form including what part of your foot you’re landing on, and she can play a metronome to keep your cadence on track. All the virtual coaching audio plays right over whatever is playing on the smartphone. The volume of the other audio automatically goes down during the message and then back up when it is completed. Audio feedback means never needing to take the phone out to check stats during a run. It also means having someone keeping the pace and pressing your run forward.

The Sensoria Fitness Running bundle we tested included one pair of fitness socks, two anklets (and magnetic USB charging cables), and one fitness t-shirt with a Bluetooth/ANT+ heart rate monitor.

Getting started with Sensoria Fitness is all about the smartphone app. After downloading the app for our iPhone we were guided through a series of personal data questions: height, weight, max heart rate, shoe size, foot width, arch type, pronation, and rotation. The app provided helpful definitions for each of the terms. We were also asked what our long-term fitness goals were with the following possible answers: I have no goals, lose weight, better performance, or endurance.

After setting up the app, we needed to pair the anklets to our phone. Because of the way the socks’ sensors line up with the foot, there is a specific left and right (the words are sewn into the upper cuff). After pulling on the socks we placed one anklet on our right sock, rolled the top of the sock down over it, and paired things up with the app. We did the same with the left anklet. The heart rate monitor on our Sensoria T-shirt paired as soon as we slipped it over our heads and appeared on screen as a beating heart. When the anklets are paired, the pressure sensors show up on screen in what appears to be real time over a graphic of the left and right foot.

The virtual coach in the ear is invaluable for anyone who wants to stay on track during a run.

Once the anklets were on and the socks rolled over them they pretty much disappear. Anyone who didn’t know would think we were just letting our socks bunch up at our angles. Which was reassuring because getting all wired up before a run had us feeling a little like a cyborg out of the Terminator movies.

To begin a run we pressed the start button in the center of the home screen and were taken to another settings page where we could select which shoes we were wearing (a good way to keep track of shoe mileage) and choose an objective for this particular run: distance, pace, time, or heart rate zone. We also set up how much feedback we wanted from Mara. Since it was our first run we chose to have her update us every minute.

Sensoria says the anklets weight 28 grams each and we can’t argue: Once positioned properly on our ankles we didn’t even know they were there. What we did notice was when our cadence slowed down or we were running too fast for our objective — a metronome sound would come up in our headphones to let us know what our cadence should be. It was cool having someone constantly keeping us on pace without having to think about it.

After a few minutes of Mara chattering away in our ears it became obvious that getting stats every minute is way too high a frequency. We had to stop and turn the updates down to every 10 minutes. This much data might be great for runners who are just starting out — pacing is easy to forget when you’re out pounding the pavement — but after a few minutes it because very distracting.

After completing a run it was easy to look back through the stats and get an overall impression of how we did. On the notifications page we discovered how inconsistent our cadence was, swinging wildly from plodding to scampering (even with the metronome playing). We also noticed that we were heel-striking 90 percent of the time (even though we focused on landing on the balls of our feet). Another upside to the anklets is that they kept a perfect record of the number of steps we’d taken during our run. We were also wearing a fitness tracker on the run and the anklets report of the steps was far more accurate.

The data was all there, but what was missing from the app was more of a smart workout that guided us through warm-ups, intervals, cool down, and so on. With the data Sensoria is logging it seems a shame not to actively shape a complete workout, a series of workouts, or an entire running program. For those who don’t like to read running books or follow specific training plan offline, Sensoria could include programs that would help runners train for a 10K, half marathon, or full. It was great being able to set pace and distance goals, but it would be more helpful, especially for beginning runners, if Sensoria could include a list of training plans that could be selected or downloaded to the app.

The reality of running in connected clothing also causes functional hurdles. The socks have to be washed and the anklets must be charged. Keeping track of one, specific pair of clean socks in a messy family laundry schedule was daunting. There are so many devices that need charging in our daily lives that adding socks to the list seems almost comical. We also found that the anklets didn’t hold a charge very long when sitting unused. This meant that several times we had to skip using them because we hadn’t placed them on the charger the night before. Sure, they could sit in their chargers all the time, but there are so few power outlets and so many gadgets!

The heart rate T-shirt worked well as a first layer for cooler days, but it’s not something we would normally wear as a top layer. Then again, we’re not that into tank tops as a rule. The nice thing about Sensoria’s heart rate monitor, however, is that it snaps into the t-shirt in the same way Garmin, Wahoo, and many other’s monitors snap into their straps. When we weren’t in the mood for the Sensoria tank we could snap the monitor into one of our other straps and head out.

Sensoria has created an app and sensors that work seamlessly together to provide important feedback to anyone who cares to improve their running. The anklets and socks may be one of the best training tools we’ve seen to help beginning runners learn a proper stride, and the virtual coach in the ear is invaluable for anyone who wants to stay on track during a run.

Smart, connected athletic clothing is obviously here to stay. The question is, how serious are you about upping your running game?

Topics
Video-editing app LumaFusion to get a Galaxy Tab S8 launch
A foldable iPad in 2024? This Apple insider is ‘positive’ it’s happening
iPhone’s Crash Detection is still firing off false calls
The best smart notebooks in 2023: 8 picks you need to check out
The best protective iPhone cases in 2023: the 25 best ones
The Galaxy S23 secretly beats the iPhone in a very important way
This exclusive Snapdragon chip supercharges the Galaxy S23 in 4 big ways
All of Samsung’s videos from today’s Galaxy Unpacked event
The best USB-C cables for 2023
Is the Samsung Galaxy S23 waterproof? What the IP rating means
Does the Samsung Galaxy S23 have an SD card slot? Know this before buying
Samsung Galaxy S23 vs. Galaxy S23 Plus: a tough choice to make
Best Phone Deals: Save on Samsung Galaxy S23, Google Pixel 7 and more