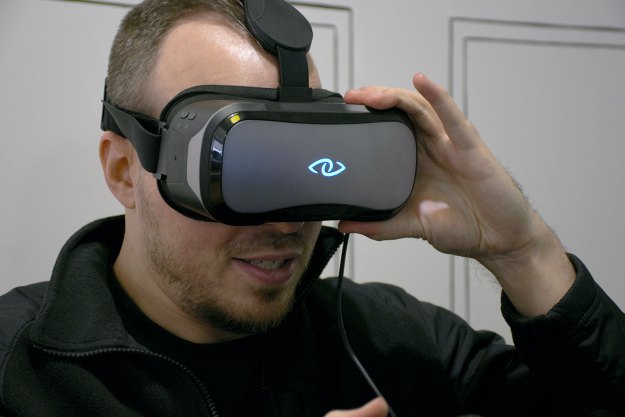 “With 3Glasses D2 Vanguard Edition, you get what you pay for: a cheap system.”

VR, or virtual reality headsets that take things beyond the entry-level experiences of the Google Cardboard or Samsung Gear VR are usually pretty expensive. At a more affordable $400, the 3Glasses D2 Vanguard Edition VR headset sits somewhere in the middle. So how middle-of-the-road does it turn out to be?

To get to that price, the Chinese manufacturer cut some corners and is relying on its own content development — along with the charity and interest of third-party developers — to give consumers using the headset plenty to work with. We used it for almost two months and came away feeling like there was always something missing.

The 3Glasses D2 has a 5.5-inch TFT-LCD display, with 2K resolution (2,560 × 1,440) and pixel density of 534ppi. That’s roughly 1080p in each eye, with a 110-degree field of view, putting it in line with other VR headsets like the HTC Vive and Oculus Rift, albeit with a modest, 60Hz refresh rate. It’s somewhat offset by a 13-millisecond response time, but the mix in specs here does have consequences for usability.

The D2 doesn’t have positional tracking, so the content on it isn’t going to require much footwork. Instead, it uses a combination of accelerometers and angular rate sensors to more precisely measure head movement.

The headset has an HDMI and USB 2.0 plug protruding out of it, so connections are pretty straightforward, in that respect. Weighing 8.7 ounces, it doesn’t feel heavy, and the two head straps keep the D2 nicely in place, with the only real consequence being bad hair after wearing it for a while. The two lenses are non-spherical, and two sliders at the bottom help adjust focus.

Technically, the headset is compatible with the Oculus Rift Development Kit 1 (DK1), but not Kit 2. 3Glasses also has its own SDK (software development kit) available to developers.

The headset also comes in two color configurations: black with white trim and all black.

It’s hard to say if it was specifically because I was using the 3Glasses headset with a Windows 10 gaming laptop, but the setup was an exercise in frustration virtually unmatched by any other product I’ve tested. The eponymous Chinese company doesn’t include a manual, opting instead to offer step-by-step instructions via a YouTube video and downloadable PowerPoint file.

The setup was an exercise in frustration virtually unmatched by any other product I’ve tested.

While a nice way to help the environment, the footage is out of date with the current website’s design, and it focuses on Windows 7 and 8, saying nothing about Windows 10. It hadn’t occurred to me that the latest version of Microsoft’s operating system would know that the 3Glasses was connected and adjust the second screen accordingly. Or at least I thought so.

Initially, there’s not a whole lot to the connections. I plugged the HDMI and USB cables into their corresponding ports, and the headset’s front logo lit up. On an Alienware 17 R3 laptop, the HDMI port is in the back, while the USB ports are on the sides. The cord on the 3Glasses headset doesn’t have a lot of slack when it forks into two, making the plugs awkward to slot in for that particular computer. This may not be the case with most laptops or desktops, but it only added to the bizarre process.

I then followed the instructions to download and install 3Linker, the management software designed to handle the headset and content playback. It immediately recognized the 3Glasses D2, and all seemed headed on the right track. The screen orientation was initially out of whack, then with an adjustment in settings on the laptop, it was better, yet now off-centered, forcing me to tilt my eyes up to see the full display through the lenses. It took repeated trial-and-error to get it right, all of which could have probably been alleviated had 3Glasses updated to explain what, if anything, a user should do when using a Windows 10 machine.

The software is decent, but 3Glasses, which offers existing games and 360 video on its own site, doesn’t populate any into 3Linker after downloading and unpacking them. They each have to be added manually through the “Add” button or by dragging and dropping them into the app — something that wasn’t immediately evident during our testing because it only started working the third time we attempted it. Why that happened, we have no idea.

Finding content to run on the headset is easy enough because 3Glasses has it on its website, though without any standalone apps as of this review. Some are games, while most are video clips that mix picturesque landscapes in China with other miscellaneous footage in 360 degrees or 3D. A couple are a little bizarre, like the “Disposing of the Corpse,” a morbid scene showing an actor lying in a blood-soaked bathtub, and “CouchKnights”, an augmented reality scene with a couch and coffee table. Others are nice point-of-view perspectives from a hand glider, go kart racer and slam dunk contest.

Games are fewer in number, with only three really being made available off the bat. The aptly-titled “ShooterGame” is the most fast-paced as a first-person shooter game, and compatible with an Xbox One controller. “Lilith” is a puzzle game that also works with the controller, and is a decent opening title to play. “Showdown” may be the most captivating because of the explosive action and mechanized enemy. Using a keyboard and mouse is another option, in case you don’t have a compatible controller.

Beyond that, however, content largely has to come from elsewhere and becomes a lesson in what can and can’t run on the unit. There is zero compatibility with Macs, game consoles, and Blu-ray players, so everything has to pass through a Windows PC. 3Glasses claims to be working with game developers in China, and up to eight games will be launched by the end of the year.

With 3Glasses D2 Vanguard Edition, you get what you pay for: a cheap system.

In the end, there isn’t a lot of content to sift through that can work on this headset, unfortunately. Some left/right split-screen 3D games and video should be fine, but I found driver and software issues sometimes messed with how smooth the experience was. Watching 2D content was also unsatisfying for the lack of consistency. At times, the display seemed tilted too far up, while other times, subtitles wouldn’t appear.

Regular PC games were totally incompatible. Watching a video through Windows Media Player did make it appear on the headset, only with an orientation that was way off. I tried adjusting it through the Windows display settings, but that only made it worse. If there was a foolproof way to get certain content to play without incident, it wasn’t evident here.

For someone who is interested in VR, but not especially tech-savvy, most of the problems and issues I uncovered would be a total non-starter. The experience from setup to playback is rife with complications that simply don’t happen with other VR headsets, including the most acclaimed models.

3Glasses offers a one-year warranty upon proof of purchase. Full refunds or exchanges are available within 15 days of receiving the headset, so long as it’s free of physical defects. For defective or damaged units out of the box, there is a 30-day window to send it back for repair or replacement.

Note that only the display, motherboard, and plastic headband buckle are fully covered under that one-year warranty. The lenses, fabric headband, padding, and cables are not.

Understandably, it’s early in the consumer VR space, so what 3Glasses has attempted must be viewed within an early adopter context. The problem is that it doesn’t really do what it should: draw in VR newcomers who don’t want to break the bank with the HTC Vive or Oculus Rift. Indeed, you do get what you pay for. Those two headsets are more advanced, perform better, and offer a bevy of content already.

Had 3Glasses come to market with something like this last year, it might have been the red carpet that showed people the way to what VR offers. Instead, it feels like a rushed product that sits in no-man’s land. With Google’s recent unveiling of its Daydream VR standard, along with the expectation that Samsung and other major manufacturers are prepping new VR headsets, it’s hard to recommend the 3Glasses D2 Vanguard Edition.