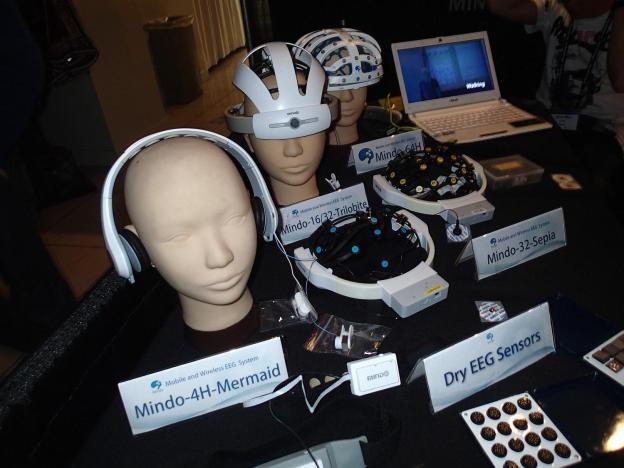 Have you ever been playing a game and thought to yourself, “You know what would make this game better? If I knew what my avatar smelled like.” Probably not, because that would be weird. But not only is that being actively worked on, the possibilities are very, very cool.

The inclusion of olfactory output in a game is just one possible level of immersion that is being bandied about during discussions of the future of gaming under the umbrella term “neurogaming.” While it might not be all that appealing to be able to take a deep whiff of your character that has been running and fighting for days at a time, there are certain gameplay elements that would benefit from this technology in incredible and unique ways.

Imagine playing a game as Wolverine, a character that has feral abilities and can smell scents. We’ve seen this play out in movies, including the first X-Men film where Wolvie smelled that Mystique was impersonating Jean Grey. What if you were playing a game and you caught a scent that was wrong for the person, something distinctive and unique like gunpowder instead of the expected smell of flowers? Even characters without special powers could use smells as a cue. Maybe you are lost in a dungeon when you smell fresh air pointing the way out, or you catch a scent of gas and know to get out of there quickly. The possibilities are limited only by the imagination.

The sense of smell has been linked to memory, so it could also be used for puzzles and to associate concepts. It could also go beyond gaming into things like advertising. One day you may turn on your futuristic TV equipped with olfactory output and an ad for a restaurant comes on accompanied by the smell of cooking food.

This level of technology is already around in a primitive way, and has even been used before. A few movie theaters experimented with pumping the smell of popcorn into a theater to get people hungry enough to go buy food at the concession stands. It worked at first, but eventually backfired when the theaters weren’t able to dissipate the smell fast enough and it began to make people nauseous. A minor detail.

Olfactory possibilities aside, messing with the brain to improve your gaming experience is something that people are working on now. Currently the most common neurogaming headsets monitor EEGs. This is impressive technology, but the results are limited. It is basically reading a signal from your brain, which results in a button being pushed. It’s not that impressive in isolation, but it’s a step towards a lot more.

Imagine using an EEG monitor paired with sensors that can read the pH level in your skin and react to your emotional responses. Say you are in a shooter and trying to snipe. Shooters frequently introduce a sniping mechanic where you hold a button to briefly steady your aim, and some games even have items that you can take that are like digital valium, allowing you to momentarily steady your hand. Those are all tricks though, designed to further connect you to a game mechanic. But what if the game could actually sense your level of agitation and react accordingly? The more agitated you were the more the scope would shake, encouraging you to calm yourself or maybe go find a better location.

That could also be used in the opposite way. If you are too relaxed, the game could increase the level of difficulty and throw more challenges at you. A survival horror game might choose your calmest moment to try to scare you, or an action game might automatically send squaddies to you if your heart rate spiked after an ambush. You might find yourself in a challenge stage where you have a time limit to defeat a certain number of enemies, and the trick would be to remain calm.

The applications of this technology extends beyond gaming. You could play games designed to try to stress you out, and after enough repetition that could help you in the real world deal with stressful situations. The context doesn’t have to be violence, either; you could be playing Tetris, and as the blocks fall faster you receive bonuses for keeping cool.

These are just a few of the possibilities that neurogaming can offer. They may seem like science fiction, but in many cases the technology necessary to accomplish them is just an evolution of what we already have. Consider gaming audio; 20 years ago, it was essentially just background noise. Today, with a good headset, you can actually hear things like footsteps in multiplayer combat games, which increases your level of immersion and adds layers to the game.

Technical leaps like this often require just one good execution of something that was previously just theoretical. Virtual Reality has been discussed for years, but now Oculus Rift is stealing headlines and others are actively looking to emulate them. In a few years, VR may be everywhere.

Twenty years from now, gaming may be as far removed from today’s gaming as 4K TVs are from radio. It is more than an evolution, it is a paradigm shift

Is GameStop doomed? The experts don’t think so
Eau de Xbox: Lynx creates a lineup of gaming-themed personal care products
Why your gaming laptop’s GPU doesn’t matter as much as you think
You think you want a ‘budget’ gaming laptop, but trust us – you don’t
Now’s the perfect time to stock up on PS5 controllers
How to evolve Tandemaus into Maushold in Pokémon Scarlet and Violet
Fortnite Chapter 3, Season 4 guide: All week 10 quests and how to complete them
All Fortnite Chapter 3, Season 4 quests
‘Wordle’ today, November 29: Answer, hints, and help for word of the day (#528)
Crisis Core: Final Fantasy VII Reunion works best as a portable game
Oh no, I’m already obsessed with Nintendo Switch Sports golf
Fae Farm is shaping up to be the coziest farming game ever
Pokémon Scarlet and Violet gym leader guide: best order, leveling, and team tips