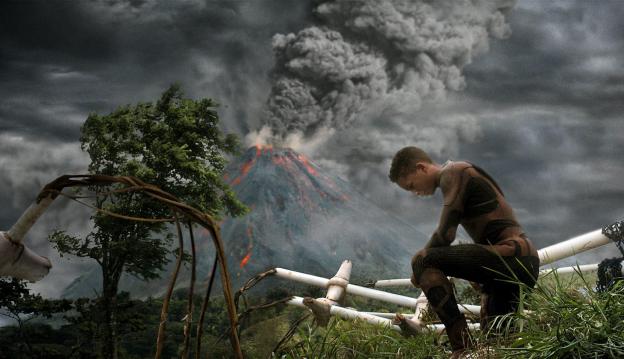 It’s tough to review an M. Night Shyamalan film without giving at least a hint of spoilers. His films have gained a reputation for having a twist of some kind, so to confirm that there is a twist in After Earth would be to spoil an otherwise predictable story, while saying there is no twist would give you a clear picture of the film’s ending from the first moment.

That makes discussing the story difficult, but not impossible. After Earth can be boiled down to the single cliché of overcoming fear, but to an almost insanely exaggerated degree. There’s a smattering of a redemption tale and a son and his estranged father thrown in there too, just for good measure. Story is pretty much an inconvenience for this movie.

A thousand years of backstory is quickly addressed and then taken as a given. After years of abusing the planet, humanity is forced to flee the Earth. The remaining population finds refuge on the planet Nova Prime, but an alien race objects, and drops creatures called Ursa that have the remarkably specific ability to see humans from the pheromones they put off when afraid. They quite literally smell fear. Score one for the power of clichés.

After this groan-inducing revelation, humanity begins to train to eliminate fear. This leads to something called “ghosting,” the ability to completely mask your pheromones by eliminating all traces of fear, thus rendering you invisible to the Ursa.

After being rejected as a member of the Rangers, an elite group that fights the Ursa, young Kitai Raige (Jaden Smith) goes on what should be a simple trip with his father Cypher Raige (Will Smith), a Ranger General and the first man to ghost. Things go sideways and they end up the sole survivors on Earth, which has spent the last millennium changing to the point that everything from the insects to the air can kill humans.

All of this is explained in the first 20 minutes of the film. The aliens humanity fights are never seen or mentioned beyond their Ursa-dropping, the Earth’s radical change in climate and evolutionary habits is never discussed, and the fact that the young and fearful Kitai is obviously not qualified to be a Ranger is never explored. You are just expected to accept these things as the setup for what is the story of Kitai’s survival and growth, as he has to travel over 100 kilometers to find a device that will bring help – all while his father is gravely wounded, but fortunately still able to give sage-like advice. Naturally, an Ursa is involved in a phenomenal coincidence, meaning Kitai must learn to master his fear. Oh, and there’s a backstory of Kitai blaming himself for something from his childhood that he couldn’t possibly have been responsible for. You can guess where that goes.

And there you have it, the entire story. There is a bit of secondary drama as Kitai’s oxygen supplements grow dangerously low, leading to a pointless moment of truth between him and his father, but for the most part you know everything you need to within minutes. When an alien that can kill humans that are afraid  is on the loose, how many possible ways can the story go? There has rarely been a plot and setting so tailored to one simple outcome. It’s really not that different from the sports movies of the 80s where a teen plays against all odds and scores the game winner, accept After Earth is far more simple minded.

The real attraction of the film comes from the off-camera relationship between Will and Jaden Smith. Other than that there is nothing really remarkable about this movie. The effects are average, the dialogue is often dull, and the greater sense of the future setting is barely hinted at. And that is After Earth’s greatest crime. The world is ridiculously tailored to the contrived plot, but it is still interesting – or it could have been if there was even a mild effort at building it.

It feels unfair and even a bit cruel to judge a young child actor, but Jaden Smith’s performance is uneven as well. After seeing his talents in The Karate Kid, this is easier to pin on the director. It starts with the way Will and Jaden deliver their lines. They both use an odd cadence, probably meant to signify the futuristic vernacular. The elder Smith manages to pull this off most of the time, while the younger struggles with it. He also oversells the character’s fear. In any other situation that would be fine – understandable even – but the film is designed around the concept of a society dedicated to overcoming fear. The character himself started the film angry that he wasn’t accepted to the ranks of people that couldn’t overcome fear despite the easily quantifiable reasons, and so the obvious contradiction feels jarring.

Despite a few entertaining moments shining through, there is nothing to really connect you to After Earth on anything more than a cursory level. It’s just too obvious and over the top in delivering its message. You know how the film has to progress, and the only thing that may keep you guessing is Shyamalan’s resume.

For a film like this to work you need to be invested in the characters, but the lazy character development doesn’t ever allow for that. Both Smiths will certainly rebound from this, and After Earth will likely be forgotten soon enough. For Shyamalan though, it marks yet another in a string of failures. It may not end his career, but it certainly won’t help his future prospects either.

Topics
A Good Day To Die Hard unites a father and son over heartwarming explosions
The Cave review: Third time’s not so charming after all
Earth Defense Force 2017 Portable review: Alien bug squashing on the go
Zero Dark Thirty review: A choose your own morality adventure
The best Call of Duty: Warzone 2.0 weapons for Season 1
How to get all starters in Pokémon Scarlet and Violet
Black Friday: This MSI gaming laptop just dropped under $500
Evil West perks guide: best perks to buy first
How to evolve Pawmo into Pawmot in Pokémon Scarlet and Violet
Live now: Save $50 on the Microsoft Xbox Series S Digital Edition deal
‘Wordle’ today, November 24: Answer, hints, and help for word of the day (#523)
7 video game characters who deserve a Macy’s Thanksgiving Day Parade balloon
The best multiplayer games on Nintendo Switch