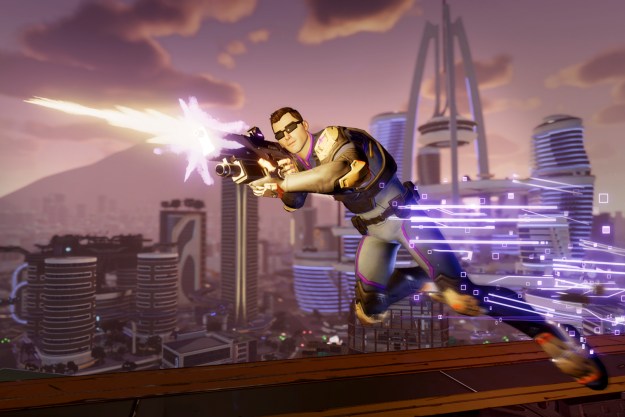 “Agents of Mayhem settles in as an underwhelming, forgetful entry in the overfilled open world genre.”

In a year filled with wonderfully realized open world games — The Legend of Zelda: Breath of the Wild, Horizon Zero Dawn, Nier: Automata — it’s difficult to wander around the world of Agents of Mayhem and not feel an overwhelming sense of missed potential. Volition’s Saints Row spin-off, godly secret agents link up to stop the threats posed by an evil, shadowy syndicate of supervillains. Its futuristic version of Seoul, South Korea is aesthetically interesting. Its story — which parodies 1980s cartoons and superhero stories — is authentic. Despite showing flashes of fun, the game’s big, theoretically inviting world devolves into a generic assemblage of open-world tropes that rarely compels you to stick around. As you’ll discover in our Agents of Mayhem review, the game’s diverse cast of interesting heroes rise to the occasion, but ultimately cannot save a monotonous adventure.

Out with the Saints…

Agents of Mayhem spawns from one of many endings of from Saints Row IV’s “Gat out of Hell” DLC. In a world without the Third Street Saints, Saint’s Row’s titular street gang turned world power, a new breed of G.I. Joe-inspired shadow organization has filled in the void, you know, as they do. L.E.G.I.O.N. — the League of Evil Gentlemen Intent on Obliterating Nations — destroyed all of the world’s governments, and now, under the direction of the nefarious Dr. Babylon, its planning the next step of its master plan in Seoul. You control the agents of M.A.Y.H.E.M. — Multinational Agency Hunting Evil Masterminds — who exist to foil Legion’s plans. Funded by the Ultor Corporation from Saints Row, and led by Persephone Brimstone from Gat Out of Hell, the agency recruited 12 heroes to retake the world from evil.

From the get-go, Agents of Mayhem makes it clear that its premise is an excuse for an homage to 1980s cartoons and action movies. The set up itself — a worldwide group of heroes against a group of terrorists obsessed with world domination — creates a status quo ripped right out of G.I. Joe, and smaller details take cues from Knight Rider, the A-Team, and other 80’s nerd culture. The game retains this stylistic choice throughout, which both helps and hinders the experience.

Your standard car can talk, KIT-style, appearing out of nowhere on command. And agents don’t hop in the car through the door — they are too cool for that; Instead, a slow-motion scene shows them jumping above the hood, posing, and teleporting into the driver’s seat, leaving a trailer of purple pixels you might see in Wargames or Transformers.

The game keeps the schtick going non-stop, with jokes and references sprinkled liberally throughout via animated cut scenes and in-mission dialogue. The agents are both self-deprecating and overly confident. The villains are both brash and naive.

Maintaining Saints Row’s distinctive brand of crude humor, there are countless sexual innuendos, awkward puns, and downright silly proclamations coming from both sides. Rather than making the whole world zany though, Agents of Mayhem takes a more dialed-in approach, only using humor that fits the situation.

And in with the Agents

There is no greater fount of humor than the agents themselves. The diverse cast of characters that make up M.A.Y.H.E.M.’s A-Team-esque caravan of heroes is an eclectic bunch, comprising a wide, though admittedly shallow, variety of trope-laden characters.

There’s Daisy, a Chicago Roller Derby girl with a mini-gun, who skates across the city. Rama, an immunologist from India, uses a long-range bow on her pursuit of truth to discover the origins of a plague that devastated her country. Scheherazade, a swift sword fighting ninja from the Middle East with a mysterious past, can teleport around the battlefield. Each hero earns the right to be called a hero in a different way, and showcases that with his or her own flair in both dialogue and in battle. The agency is a melting pot, and each agent brings something different to the table.

That being said, while the agents are interesting at face value, they never truly develop throughout their long adventure. Each agent suggests a promising personality, but fails to grow or extend beyond cookie-cutter caricatures. Perhaps this is because there are so many of them, or because the characters they’re based on were paper thin to begin with. Regardless, it’s hard to get attached to any of them.

Despite their narrative deficiencies, you can really feel the differences between the different agents when you control them. Each one has his or her own primary weapon, along with special and super-moves (Mayhem abilities). The characters resemble those from hero-based shooters like Overwatch. As you play, the agents in your squad level up, earn new ability upgrades and gadgets that modify buffs. The customization options are robust, and really do solidify each hero as a unique entity.

Each character is unique, but their talents are not used to great effect. Before you enter the game’s overworld, you choose a “squad” of three agents to fill your squad. Only one is present at a time, but you can swap among them at any time. This can lead to some high-octane strings of attacks, and essentially gives you three lives.

As you unlock more agents, deciding who to bring comes down to personal preference. A few missions require heroes with particular skill sets, but for the most part, you’re free to tinker with different combinations of heroes. That said, there is some strategy in mixing and matching characters with short, mid, and, long range attack styles.

Even the most important levels are cobbled together from basic mission types.

Like latter Saints Row games, the agents feel more like superheroes than secret spies. They can jump and scale buildings, take no damage from huge falls, and are supremely resistant to all manner of violence. You have unlimited ammo. Your special moves, which operate on a cooldown, regenerate quickly. The balance is highly customizable (there are 15 difficulty settings), but the game defaults to giving you the run of the place. As exciting as it is to control a superhero, there comes a point when feeling nigh-invincible is a detriment.

Even with super-human abilities, though, enemies take an inordinate amount of time to fall. Your foes are classic “bullet sponges,” taking many magazines worth ammunition to take down. Hit points fly off of their metallic bodies, reminding you that you’re doing damage even as they return fire unfazed.

Sadly, our superheroes are relegated to performing less-than-super tasks much of the game. Agents of Mayhem has a predictable pattern of conventional open-world missions: search and destroy, “hack” (via a timing minigame) and steal some data, shoot waves of enemies, races — all the kinds of missions you’d expect to find littering a game’s city map.

Sadly, our superheroes are relegated to performing less-than-super tasks much of the game.

That in and of itself isn’t necessarily a knock on the game; many good open-world games feature similar mission types. The bigger issue is that the game lacks spectacle: Even the most important levels are cobbled together from its basic mission types, remixing them into drawn out takes on the same tasks you’ve completed a dozen times before.

It doesn’t help that the missions are almost always too long. Quite often, you’re asked to go investigate a lead on Legion’s nefarious doings, only to find out that you were too late and must travel somewhere else to investigate. Without a strong story hook, this “gotcha” mechanic fails to beef up missions, and simply wastes time.

Mayhem’s most egregious problem, perhaps, is its flagrant use of recycled assets and environments. Missions frequently task you with finding one of a handful of secret entrances for Legion’s lairs scattered around Seoul, all of which look and feel identical. We lost track of how many times we encountered with the same layout, enemies, and goals. In a game that relies so much on personality and style, using rehashed environments and identical art feels like a cardinal sin.

At the very least, the tedious missions can be broken up by the game’s optional hero-specific side missions, which are just as repetitive, but at least feature a hefty helping of character development. In these missions, we learn more about why each agent joined M.A.Y.H.E.M. Playing to the game’s strengths, these missions, made us wish that the whole game were built that way.

Unfortunately, despite frequent high powered explosions and the myriad of ways to approach combat, the humdrum nature of the missions keeps the game from setting off an explosion worth marveling at.

As cool as Mayhem’s futuristic take on Seoul may look — nothing will blow you away visually. The big city is cluttered, but still feels empty all the same. Adorned with flashing lights and bedazzled fixtures, Seoul should be brimming with life, but it’s actually more like a desert. Few pedestrians roam the sidewalks and not many cars can be found on roads.

The lack of life in the city will not impact your ability to drive like maniac, blowing up cars and streetlights as you go. You can call an agency car at any time, and it will come pick you up in style. Like so many aspects of this game, if you don’t look too closely, it’s possible to enjoy this run-of-the-mill open world superhero story. In the end, though, it’s merely going through the motions.

Agents of Mayhem is a generic take on the city open world shooter. A diverse cast of heroes and a few funny one liners save it from being downright bad, but its repetitive missions and bland world firmly solidify its mediocrity.

Yes, there are a ton of open-world games these days, and many of them are far more interesting. Watch Dogs 2, Grand Theft Auto V, and the PS4 exclusive Horizon: Zero Dawn all offer better big city open world experiences.

The main campaign took us about 25 hours, with side missions and available contracts adding at least 10 more.

If you do decide to buy this game, we currently recommend you purchase it on PlayStation 4. Based on our testing on a pre-release version of the retail build, the Xbox One version featured longer load times and framerate issues.