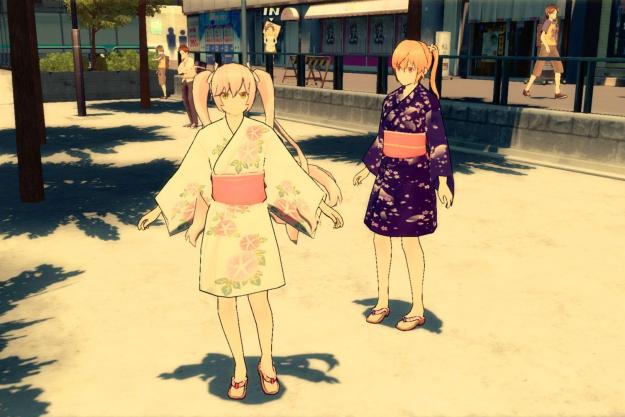 “Akiba's Trip can easily be mistaken for what it's satirizing, but beneath that façade is an intelligent game with a surprisingly noble purpose.”

From the outside, Akiba’s Trip looks like the very worst of the past decade in Japanese pop culture, the sort of fetishistic, hyper-sexualized anime tripe born of “moe” culture. It’s a cunning mask, though. Like all good satire, Akiba’s Trip can easily be mistaken for what it’s satirizing (problematically so at times), but beneath that façade is an intelligent game with a surprisingly noble purpose. Akiba’s Trip is about railing against addictive consumerism by demystifying the naked body.

Seriously. That’s not some media studies deep read of the game, either. Akiba’s Trip spells out its premise in bald, self-aware terms right in its opening scenes.

After naming your character, a Japanese teenage boy so generic he looks like a background character from Persona 4, and reading an intro to the real life pop mecca called Akihabara (Akiba if you’re feeling affectionate), you find yourself bound in a nasty basement. Your captors are Synthisters, freaky vampires that are slowly taking over Akiba by sucking the life force out of its comics, games, and anime obsessed denizens.

They didn’t kidnap you; you showed up freely because they offered you a job with limited edition anime figures as compensation. Instead of the job, you got turned into a Synthister yourself, full of crazy strength but vulnerable to sunlight, and you break free with the help of mysterious, but powerful teenage girl named Shizuku.

Trip is disarmingly funny and honest. While the game does involve a lot of active play wandering around Akiba and beating up Synthisters, it’s primarily a visual novel like 3DS/Vita cult classic Virtue’s Last Reward or the Ace Attorney series. More often than not, you’re reading/listening while looking at expressive portraits of the characters, waiting for your turn to speak, which is engrossing thanks to the strength of Trip’s writing.

Publisher XSEED translates the parodic source text with serious flare. The game’s indictment of nerd culture’s obsessive streak is plain out the gate, since your dialogue is limited to brash or stoic retorts, or brazenly demanding you get the swag you were lured in with. Lust for material goods like rare manga t-shirts and other items, this raw energy, is what gives the Synthisters power in the first place. It’s appropriate that that’s how you defeat them too.

When confronting Synthisters, or sometimes folks just trying to rough you up out in the streets, Trip‘s other primary activity kicks in: fights! Similar to Sega’s Yakuza series, Trip‘s fights are contained in arenas and have you thrashing enemies with kicks, punches, or strikes with makeshift weapons like soccer balls or keyboards, albeit slowly and strategically.

There’s a chunky flow to fighting that’s hard to acclimate to, since wailing on the kick to attack your opponents legs or punches to nail them in the face locks you into drawn out animations. Where most brawlers have the cadence of a dance, Akiba’s Trip feels more like an awkward, loping long jump where you build momentum before a big finisher. A big finisher where you pull off your enemies’ clothing.

Akiba’s Trip spells out its premise in bald, self-aware terms right in its opening scenes.

Here’s the pervy hook sold in the game’s title. Finishing off Synthisters means exposing them fully to the sun by yanking off their pants, shirts, and hats. Male or female, everyone’s getting stripped down to his or her unmentionables when the fight ends. High, mid, and low strikes in combat weaken those regions of clothing that can then be pulled off, which leads to a sort of rhythm game. If you’ve beaten the bejesus out of a bunch of geek vampires, you can yank off their clothes in a chain, whisking between them to tear free muscle shirts and mini-skirts as you go.

If nothing else, Akiba’s Trip is impressive in that it makes stripping down enemies feel funny and liberating rather than gross. It’s funny more than anything else to see this goofball knocking people around with a rolled up poster then stripping them off the fashionable wears they care so much about.

Anime and gaming culture are plagued by voyeuristic fetishism, treating sex like something forbidden and unseen. Bayonetta, even Metroid, and countless games like Senran Kagura titillate by letting players sneak a peak, looking up a skirt like a skeezy seventh grader. Akiba’s Trip is all about flipping that perspective, making you a nudist avenger, spinning around a fetish community and making sex and acceptance of the human body a force for good.

The sweetest plums in Akiba‘s basket are seeing the different ways it explores its weird, progressive agenda. In addition to a few dozen missions spread across 10 hours in the main game, there are myriad side missions that earn you more gear and money to kit up. Many of them involve confronting people who’ve let their hobbies go too far.

One of the very first has you finding a woman’s friend obsessed with yaoi, a subgenre of Japanese comics exclusively devoted to male-on-male gay sex and relationships. Your whole interaction with her isn’t denouncing what gets her off, just that she shouldn’t let it consume her or isolate her from other people. Men, you can respond, are more than just who’s a top and who’s a bottom.

Trip is sadly only so progressive. Even that scenario ends with a slap-and-strip fight, and it’s a shame there aren’t more non-violent solutions. It’s encouraging to see a game cast a satirical eye on antisocial sexual politics, but the game still engages in a lot of the same problematic behavior.

Strip combos, for example, still culminate in a money shot of your opponents half-naked, the same sort of invasive sneak-a-peak stuff it’s also making fun of. On the one hand, it embraces Trip‘s sexually free spirit; a little perviness is fun after all. On the other hand it feels like the game is trying to simultaneously have and eat its cake. It falls prey to bad satire’s chief failing: sometimes it just is a version of what it’s satirizing.

Further complications keep Trip from rising to its full potential. No matter what, it’s a hetero man’s game. Even if you can pick a name, you can’t pick a gender. While there’s tons of game with multiple storylines, taking about thirty or more hours to see all of, those multiple paths are defined by which woman in the cast your character pursues. Shizuku, Tohko, and Shion are fun characters, despite the fact that they fit too neatly into archetypes, it’s just a shame you can’t play as them.

It’s not fair to call out Trip for being what it’s not. There’s a couple of novels worth of text in here, and good storytelling lives on specificity. Having multiple gender and sexuality options would have required it be rewritten many times over, but it’s still hard not to wish Akiba’s Trip had the full monty.

Myriad technical problems also interfere on both PlayStation 3 and PS Vita. Loading screens are incessant between Akiba’s streets, characters in the background like those needed to trigger side-missions often aren’t even visible when you walk into a neighborhood, and it’s not even clear how some mechanics work. A scanner for visually identifying Synthisters, for example, doesn’t clearly mark them unless you’re practically on top of the character. Fights too can be brutally unfair, the thick pace overly frustrating when you’re surrounded by multiple enemies.

For all of those issues, though, Akiba’s Trip is still worthy of praise for its work to change how games approach sex. Acquire may not be starting a revolution amongst its peers, but it’s pushing things forward, playfully, honestly, nakedly.

This game was reviewed on a PlayStation Vita using a copy purchased by the author. A PlayStation 3 copy was also provided by the publisher.