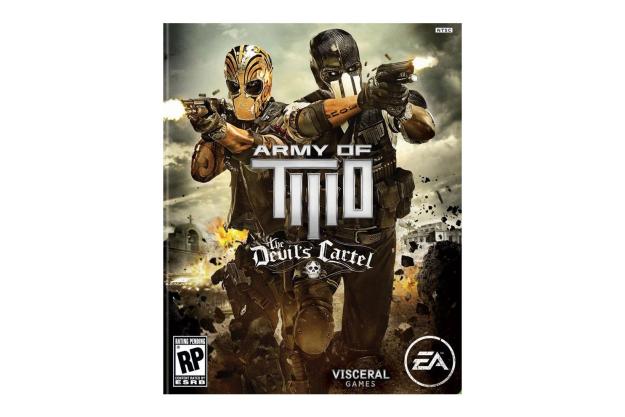 “EA's Army of Two is just dumb and heartless, even by shooter standards.”

EA Montreal developed the original Army of Two in a very different landscape than the one that birthed Army of Two: The Devil’s Cartel. When the first game was in production, cooperative games on consoles were still a rarity. There were games like Gears of War and Halo out in the world, but few that were actually built for two different characters who sometimes had different goals. Even the idea of having one player need to boost another one up onto a ledge was novel before the game came out in 2008. Now it’s common bordering on cliche. Even horror series like Dead Space 3 have their own little armies of two or more. So in 2013, when the novelty of co-op has washed away, what’s Army of Two’s role? In lieu of new co-op ideas, does The Devil’s Cartel have something important to say about the terrifying violence of the Mexican drug trade or about private military corporations? Is it some kind of all out action spectacle like Call of Duty, or maybe an attempt at comedy like Bulletstorm? What’s the point?

There isn’t one. Army of Two: The Devil’s Cartel is so empty, so devoid of meaning and merit, that it’s not even offensive -at least, its content isn’t offensive. It plays like a generic video game featured in the background of a movie that doesn’t have the budget to license a real game. It also exposes the gaping void in the video game industry’s heart. Here it is: The Shooter. In this game you press forward, shoot a gun at digital characters shooting guns at you, earning money each time you shoot off a leg to buy more guns and maybe a Skullcandy t-shirt to put on your character. The game has as much personality as a roll of paper towels.

Let me be clear on one point: Army of Two: The Devil’s Cartel works, at least as a machine. There is some awkwardness here and there with its pacing, but the game doesn’t do much to try and tell a story. Alpha and Bravo are employees of TWO, a private military organization hired to protect a politician in a Mexican city dead set on fighting the vicious cartel that controls the area. A motorcade gets blown up by those goons in the opening scene, hinting that the action is going to start in medias res, but no! First, you have to go into not one, but two flashbacks, one for training to shoot stuff, the second to explain why Salem and Rios, the protagonists of the previous games, are absent, plus it introduces the fearless female lead Fiona. After an hour and change, then its back to the main story. It happens so slowly, that it takes awhile to realize that the game never even bothered to explain why the hell you’re doing anything at all.

What you’re doing throughout that introduction and across the six to seven hours that follow is shooting the endless hordes of La Guadana, the best staffed drug cartel in the world. La Guadana fights you in the streets, shanty towns, old hotels, graveyards, air fields, sewers; any locale with video game history, really. In one bright scene, they even fight in a town square decked out for the Dia de los Muertos festival, with fireworks boxes replace the omnipresent explosive barrels as environmental weapons. You duck behind cover, some of which can be chipped away, and pop out shooting with a variety of machineguns and shotguns. Shoot enough guys and a meter fills up so you can go into “Overkill” mode, where the screen goes gold and you’re invincible, free to shoot away with infinite ammo.

With each kill, a little dollar sign pops up. Shot a guy? Here’s $10. Headshot? That’s $15. Run past a guy and distract him so your partner can shoot him, that’s a bonus for acting as bait. The cash is spent on a mountain of new parts for your guns to make them work better. Or to paint them gold. Or to buy a mask painted like Captain America’s shield. There are hundreds upon hundreds of these guys to shoot, almost all of them identical. Some wear little hats and you can earn an achievement for shooting them off. It’s called “Fashion Police.”

Wait, Why Are We in Mexico?

Despite the poor.. well, everything else, the shooting plays well. It doesn’t have the weight or smarts of a Gears of War, but it’s better than the combat of Uncharted 3 where the artificial intelligence has the smarts of a Roomba, and its more tightly paced than the messy Spec Ops: The Line. Spec Ops is an important comparison point, though. Yager’s game was built to do two things: Lay bare the vapid cruelty of this brand of shooter that’s become the national product of video game land, and to re-tell the Heart of Darkness, the story of how humans will always lose their humanity when they go to war.

Army of Two: The Devil’s Cartel was seemingly built for no reason. At no point does it engage in the type of goofiness or bombast of something like The Expendables. In that movie, a 65-year-old man gets in a knife fight with the star of Double Impact, and then Chuck Norris shoots a guy going through an airport x-ray machine. It’s inherently silly. Devil’s Cartel doesn’t really even scratch at violence as humor. One exchange between Alpha and Bravo: “Man, I’ve got to get home to my girl.” “You got a girl? What’s his name, bro?” Then it’s right back to the same rote shooting. The game never winks at the player or itself. There would need to be a joke for the game to be in on it.

Even for the shooter addict, there’s nothing here to recommend. The most ambitious co-operative ideas are going through dark rooms when only one character has a flashlight, but even that trick’s been done in games like Resident Evil 5. There are literally hundreds of games that offer excellent versions of the things that Army of Two only does with the base level of competence. Even Call of Duty Black Ops: Declassified’s memorization-based arcade style levels are more interesting than Cartel’s faceless action.

There are many fine shooters in the world, and while the game industry needs to make fewer of them, that doesn’t mean they shouldn’t be made at all. A game needs to have intent. It needs to have a purpose, a soul, even if that purpose is to create a playground to wreak havoc in. If that’s the game someone wants to make, then it better be a damn fine playground. Army of Two is just dumb and heartless.

Here’s what’s offensive about Army of Two: The Devil’s Cartel: The average Xbox 360 and PlayStation 3 game costs between $18 million and $28 million to make. That was in 2008 when the very first Army of Two was made, so it’s possible that EA has streamlined its production to lower costs somewhat on this game. No matter what though, it still cost millions to finish and release this empty thing. It’s an astounding waste of time, talent, and money that could have been used for a nearly infinite number of other purposes. That EA spent those resources building this altar to mediocrity is shameful.

The first two Max Payne games are getting remakes

How to use It Takes Two’s Friend’s Pass

Minecraft, It Takes Two, and more come to Xbox Game Pass this month