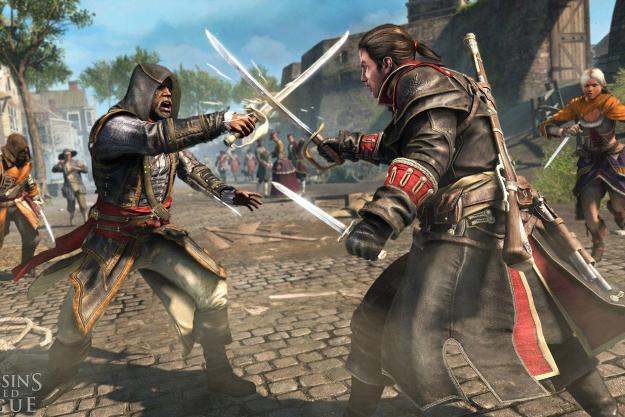 “Though enjoyable, Assassin’s Creed Rogue plays like a greatest hits version of previous games in the series.”

Have you ever met up with a good friend after years apart and, upon discovering you don’t have much to talk about, simply rehash old memories to avoid awkward silences? Assassin’s Creed Rogue has that same kind of familiar-but-not-quite-the-same feeling. Tying together several other games in the series, Rogue uses what worked before without introducing much that’s new. The resulting game is fun and engaging, but misses the ‘wow’ factor that previous efforts delivered.

The content Assassin’s Creed Rogue borrows from other games is thankfully some of the series’ best work.

Assassin’s Creed Rogue tells the story of Shay Patrick Cormac, an Irish-born Assassin-in-training who ditches the Brotherhood and turns Templar. The about-face means you’re hunting Assassins instead of helping them–and that includes a few familiar characters you might not be so willing to take down.

Shay steers his ship, the Morrigan, through the icy waters of the North Atlantic, with a significant portion of the game taking place in New York and Canada. Rogue borrows heavily from other Assassin’s Creed titles, with 2013’s Assassin’s Creed IV: Black Flag serving as a huge source of inspiration. But where Black Flag’s Caribbean felt vast and open, Rogue often feels closed off, with different parts of the world map separated by load screens.

Naval battles return from Black Flag, and they work as well as ever. It’s extremely satisfying, tactically, to commandeer several weapons while maneuvering a giant vessel through iceberg-filled waters. The Morrigan has a few new tricks, like the ability to cut through ice with its ram and drop barrels of burning oil to engulf foes in flames, but commanding the ship is largely the same as it was in Black Flag.

That’s not the only stop on the Assassin’s Creed Greatest Hits Tour: There are islands to explore and forts to take down, as in ACIV; animals to hunt in the North American wilderness, much like Connor did in ACIII; and you can even upgrade buildings for income like Ezio first did during ACII’s Italian Renaissance adventure. Rogue is a game that assumes you’ve played Assassin’s Creed before, and doesn’t waste much time on rehashed tutorials.

The content Rogue borrows from other games is thankfully some of the series’ best work; though it feels a little “been there, done that,” it’s hard to complain about getting to engage in compelling naval battles or listen to your crewmen sing jolly shanties. Unfortunately, what Rogue does add to the formula doesn’t work quite as well.

Shay spends much of his time taking down hideouts and navigating through gang-held territory, which is all fine and good. But setting foot on unfriendly land makes you vulnerable to stalkers, a new type of enemy that – true to the Assassins you pursue – hunts you. The stalker’s pursuit, signaled with whispering voices and a glowing effect at the borders of the screen, is an irritating constant in enemy territory until you take down the nearby hideout.

In this way, Rogue effectively bullies you into engaging with its new content. You can turn on Eagle Vision and use a new compass to locate the stalker and take him down. But it’s not a case of the game compelling you to do something fun. There’s no joy in a hunt when you’re chasing these stalkers down just so you can shut them up.

Assassin’s Creed Rogue doesn’t accomplish anything new or move the series forward in any meaningful way.

Story-wise, longtime fans get to see quite a few old friends as Shay leaves his Assassin brothers and joins up with the Templars. It’s weird but cool to come across characters like ACIII’s Achilles and ACIV’s Adewale hanging out at the Davenport Homestead, and Rogue does fill in a lot of the gaps between those two games.

That said, being a Templar never quite feels right after playing as an Assassin for so many years. It’s hard to get motivated for missions that involve killing beloved characters or screwing over the Brotherhood. There’s a few new characters, including Shay’s first mate Gist, who looks like he’s dressed as Red Dead Redemption’s John Marston for Halloween and talks like the Moviefone guy; but overall, Rogue feels like the most rehashed Assassin’s Creed game yet..

It’s also hard to get fired up about Rogue if you’ve spent a year with the latest consoles, particularly if you played Black Flag on PlayStation 4 or Xbox One. Rogue‘s graphics are forever hobbled by the older hardware it was built for, but its vision of the icy North Atlantic is still impressive. It’s just too bad exploration involves so many lengthy loading screens.

On top of that, the game also has its share of odd glitches, such as Shay refusing to crouch and hide while attempting to infiltrate restricted areas, enemy guards sent flying into the horizon with a single hit, and death scenes triggering with seemingly no action causing it. The issues are frequent enough to make the occasional screen stutter a held-breath moment. Just long enough to panic: “Oh crap, did the game just freeze?”

Assassin’s Creed Rogue doesn’t accomplish anything new or move the series forward in any meaningful way. It’s clearly a consolation prize for gamers stuck playing on PlayStation 3s and Xbox 360s, a copy-paste of tactics and characters from previous games with a few new bells and whistles thrown in. That said, Ubisoft Sofia borrows some of the series’ best gameplay ideas, so at least the retread is thoroughly enjoyable.

Rogue offers dozens of hours of stealth-assassinating, ocean-exploring, treasure-finding fun, providing plenty of reason to fire up your outdated gaming console. But much like that now-unfamiliar old friend, it’s really just an awkward silence averted.

This game was reviewed on a PlayStation 3 using a disc provided by Ubisoft.