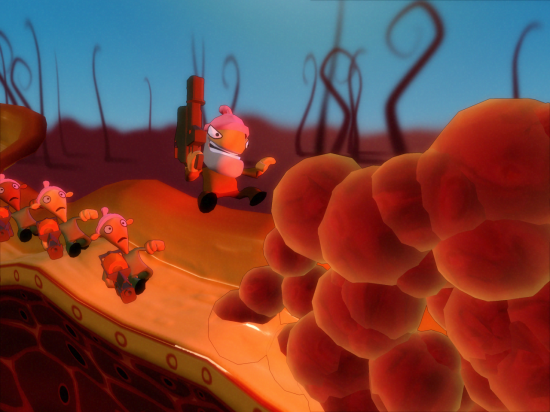 A computer game banned by Xbox for what it perceived to be risqué content picked up a top award in the UK recently.

The game, which is designed to educate teenagers about sexually transmitted diseases, bagged the prize at the British Academy Children’s Awards, organized by BAFTA, late last month.

Privates, described by its Brit-based developer Size Five Games as “a sex ed shoot-‘em-up romp,” requires the gamer to “lead a teeny-tiny gang of condom-hatted marines as they delve into peoples’ vaginas and bottoms and blast away at all manner of oozy, shouty monsters.”

It was commissioned by the UK’s Channel 4 Television as a way of heightening awareness about the dangers of sexually transmitted diseases.

Privates comprises five levels of “bug-busting action” that takes place among “a variety of gorgeous 3D locations, with a fully-voiced comedy script and a nutso soundtrack.”

“You never know,” the game’s blurb says, “you might even learn something handy about your downstairs-department.”

Asked at the award ceremony about the response to his game, creator Dan Marshall said, “I get more fan mail about Privates than for anything else. People love it…and are blown away by its audacious nature.”

Marshall said he had been hoping to get the game released on the Xbox 360 but when he sent details of it to the gaming platform, it was rejected. “The original design document broke a vast number of Xbox’s rules,” Marshall said. “I sent a copy to the very nice people at Xbox, who loved it, but decided that the rules needed to hold steady.”

Anyone who wants to try it out is in luck though, as Privates is available for download to PCs for free.