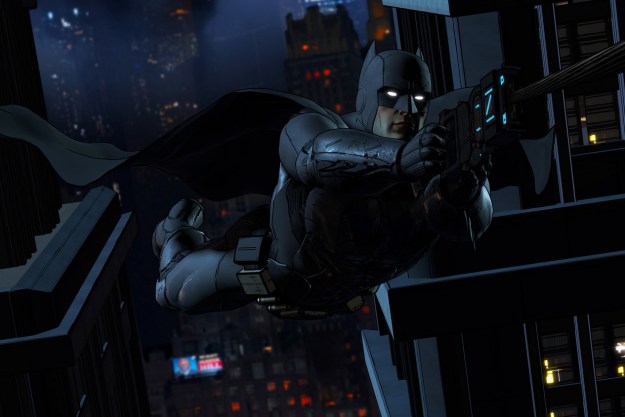 “‘Batman: The Telltale Series’ elegantly translates the studio’s winning episodic, narrative format to one of their biggest franchises yet: DC’s Batman.”

Riding high off the immense success of its The Walking Dead adaptations, Telltale Games is building an empire of episodic, choice-driven adventure games based on popular third-party franchises. Testing the waters with beloved franchises like Fables and Borderlands, then another television mega-hit with Game of Thrones, Telltale is now rolling out one of its most established properties yet with Batman: The Telltale Series, which just launched its first episode.

In broad strokes Batman plays the same as any other Telltale series. Each episode is cinematically structured, taking a few hours to play through a largely scripted series of events with various decisions you make leading to consequences both within the episode and in subsequent ones.

You play as Batman/Bruce Wayne (looking for all the world like Sterling Archer), helping DA Harvey Dent (not yet Two-Face, obviously) in his mayoral campaign while deflecting loyal butler Alfred’s concerns that you’re going to get yourself killed. Catwoman shows up as well, a new agent in town with mysterious intentions. It’s not an origin story, but it’s relatively early in Batman’s timeline, with his perceived role in Gotham City not yet fully fleshed out. As the first episode pans out, it raises questions about Bruce’s parents and their possible connections to the notorious Falcone mob family.

The elephant in the room with any new Batman video game is Rocksteady’s Arkham series. Starting with the microcosmic Arkham Asylum before expanding into City and Knight, Rocksteady created what many hold up to be the most comprehensive and immersive super hero experience ever.

Specifically the Arkham series captures the visceral experience of being Batman – swooping between gargoyles, dropping down from the shadows to snatch up unsuspecting and increasingly terrified henchmen, then finally erupting into explosive, fluid brawls against dozens of goons. With a huge, customizable variety of tools that can be combined and utilized for both stealth and combat, Rocksteady empowered players with a huge amount of tactical choice in the moment-to-moment fantasy of being Batman. In this regard it’s not fair to compare Telltale’s take on Batman with Rocksteady’s. Arkham is an action franchise, whereas Telltale’s games are focused entirely on branching choice narratives, and so the former is much better equipped to translate all of Batman’s signature “Zok!”s and “Kapow!”s than the latter.

Telltale’s games have long involved action sequences, but structured as quick time events (QTEs), where the player has to hit the correct sequence of buttons as they flash on the screen alongside the action. The first episode of Batman opens with a fight against some thugs and then Catwoman, which plays out largely as these have in previous games.

If you like Telltale games, and you like Batman, then this is absolutely the game for you.

To capture that tactical element, some of the fights have been supplemented with a planning phase. There is a climactic fight in the first episode that starts with the player controlling a stealthy drone that’s flying outside the windows of Carmine Falcone’s penthouse. There are four armed guards, each with several options in their surrounding environment for how to handle them (shoot down a lighting fixture, smash them into a table, etc).

Once you’ve plotted out your assault, the usual QTE action sequence begins. Your decisions inform the fight, but only cosmetically. So far as we could tell there were no wrong choices, so it still boiled down to a test of reflexes in order to move ahead with the story. On the one hand, it’s a relatively elegant way to integrate the flavor of Arkham’s Batman into Telltale’s action framework, but on the other it will not do much to allay frustrations about the general illusion of freedom in the developer’s games.

You’re a detective? Then detect!

Where the Arkham games fell short, however, was in the investigation segments. Arkham Batman’s “Detective Vision” highlighted enemies and interactive objects in bright neon colors. Outside of the tactical value of planning how to handle foes, it was utilized in awkward detecting segments that amounted to little more than scavenger hunts, searching for the correct series of clues so that Batman could connect the dots, solve the mystery, and move on with the game.

As a more narrative-focused take on the franchise, Telltale’s Batman might be better equipped to flesh out this aspect of the fantasy. Telltale’s Batman conducts investigations by exploring the scene and noting relevant clues. Then you draw connections between disparate clues in order to piece together the narrative.

In the first episode’s main example, these were largely straightforward cases of cause and effect, such as linking the shell of an explosive round with a shard of shrapnel from a barrel of volatile chemicals. Since this sequence was introducing the mechanic, it will presumable be put to more complicated effect as the series goes on. Even in this simple state, the added step of not just finding, but connecting clues does a lot to enhance the investigatory elements of being Batman (although it still falls prey to the larger problem of most detective video games as laid out by Westwood Studio co-founder Louis Castle in a recent episode of the Designer Notes podcast. He argued that as long as a game has a fixed, correct answer, the “detection” will never be more than a puzzle that can be solved with trial and error).

If you like Telltale games, and you like Batman, then this is absolutely the game for you. Telltale has honed its gameplay into a smooth formula, and Batman is an excellent example. Like with The Walking Dead the episodic structure of the source comics lends itself well to the format. Decades of comics has given Telltale’s writers a huge canon from which to draw. It also artfully utilizes the same graphic, bold-outlined style of art utilized in Telltale’s Borderlands and The Wolf Among Us.

However, outside of a few minor, flavorful additions, it does little to go beyond the studio’s established formula. If you’re not a fan of Telltale’s on-rails narrative style, then Batman will do little to win you over.

Episode one of Batman: The Telltale Series is available now digitally, with a physical following on September 13. We played it on PlayStation 4 at an event hosted by the publisher.