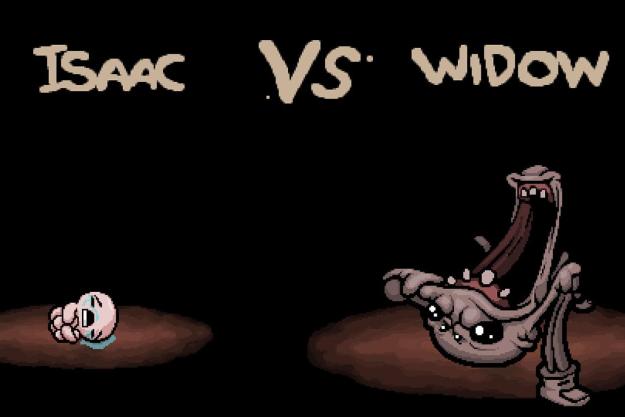 “The Binding of Isaac: Rebirth is a massively improved version of an already great game that’s filled to the brim with horrifying and disgusting imagery.”

The Binding of Isaac: Rebirth is a truly disgusting game. Human excrement litters the floor of almost every randomly generated room, sometimes trailing behind you as you flee from the floating, murderous heads of aborted fetuses. Your weapons are a child’s tears and globules of blood and pus, your enemies are flies the size of cats and toddlers, with their faces stuffed full of spiders.

You see these horrifying images and countless others over and over as you start and die and start again, and after a while they look normal. But it’s important to not lose sight of just how gross The Binding of Isaac is; when you do, it becomes just like any other game. And that it most certainly is not.

It’s important to not lose sight of just how gross The Binding of Isaac is.

Isaac is a dark fairy tale. This was true of the original, and it’s true of Rebirth. In many ways the two versions of the game are very similar — if you haven’t played in a while you won’t notice every difference right away. But as you delve further into Rebirth you begin to realize that almost every facet of the game has been improved.

Rebirth is essentially what The Binding of Isaac might have been in the first place, if it hadn’t been developed originally using the outdated Flash engine. Creator Edmund McMillen (one half of Super Meat Boy developer Team Meat) regretted his original choice of engine — it seems he never anticipated Isaac taking off like it did — and Rebirth is his recompense.

McMillen and developer Nicalis have ported Isaac to a new engine, freeing it from the shackles of Flash and nearly doubling it in size. They’ve added new items, levels, characters, bosses, secrets, challenges, and more, overhauled the graphics and gameplay, and added tons of new options. The game no longer chugs along like it’s in pain, except for occasional frame rate drops on the PS Vita. And with the overwhelming amount of new content, Isaac now feels fresh to even its biggest fans.

But Rebirth is absolutely still the same game. It’s the story of a sad little boy with a filicidal mother, who escapes through a hatch in the floor when her religious hallucinations impel her to murder him with a large knife.

Isaac encounters unimaginable horrors as he retreats further and further down the bloody rabbit hole. And he shoots these horrors, one and all, with his own freely-flowing tears. But one of the game’s most addictive aspects is just how severely Isaac and the other unlockable characters can transform over the course of a single play through, using whatever random selection of the game’s circa-300 items happens to appear.

These transformations are as gruesome as anything else in Isaac, with each reflected in your avatar’s physical appearance. When Isaac finds toothpicks, he uses them to prop his eyelids open, letting him fire more tears, and turning them bloody — they do more damage that way anyhow. A “chemical peel” sloughs off half the skin from Isaac’s face, causing tears from one eye to do bonus damage.

As you delve further into Rebirth, you begin to realize that almost every facet of the game has been improved.

These items – which also include a crown of thorns, a bottled fetus, and the severed head of Isaac’s own cat, bursting with flies – are the best (and most consistently and delightfully offensive) thing in the game. Finding them (or not) is the make-or-break pivot for your every run.

At first, Isaac can only shoot tears in four directions, which is naturally quite pathetic. But as you progress and (ideally) find better and better trinkets, Isaac might take on the final boss(es) as an absurdly powerful, winged black demon that rapid-fires blood globs the size of his head, shoots screen-obscuring beams of pure evil, and receives help from an army of familiars, all contributing their own fire to the cacophonous din of destruction. Get lucky enough and you feel invincible.

Then again you might get crap for items and die horribly after just a few rooms. The possibilities feel endless, but the inherently luck-based nature of the game might turn some players off. All the awesome new items help ease the challenge, as does the new ability to save and input a “seed,” a code that the game interprets to configure its procedurally generated levels a certain way. But ultimately, much is still left to chance, which stings when a good run is ruined after you start coming up empty on item drops.

Regardless, Rebirth is the definitive version of this game, with the most content (including the Wrath of the Lamb expansion), the best performance, and overall the most bang-to-buck ratio. It plays beautifully on PlayStation 4 and Vita, with saves that – once a post-release update goes live – sync between the two. And the multiplayer, which lets a second, local player join as Isaac’s minion is a welcome, if minor, addition.

There’s a slight issue in that it’s simply too dark to see much of anything on some floors, especially on Vita, which has some issues when it comes to making system-level brightness adjustments for games. But that’s a minor complaint in this incredibly rewarding experience.

If The Binding of Isaac‘s randomness didn’t faze you the first time around, and if the endless toilet jokes didn’t offend you before, then this overhaul is definitely your cup of blood-and-feces-filled tea. Even if the original failed to suck you in, Rebirth’s countless improvements might change your mind.

This game was reviewed on a PlayStation 4 using a free download from the author’s PlayStation Plus membership.

A YouTuber has created a much smaller, thinner PS5 Slim