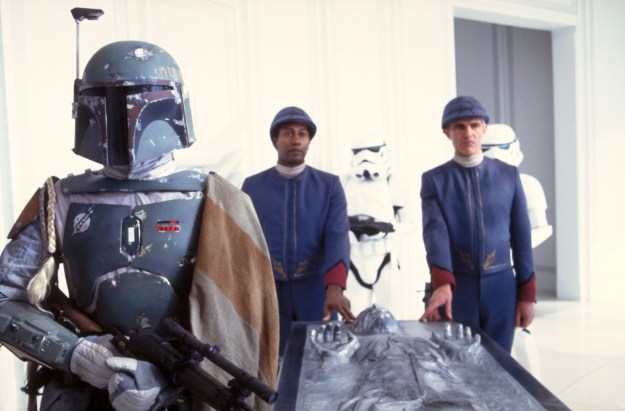 Disney is wasting no time gearing up the Star Wars machine. And why not? The franchise is still among the most popular entertainment properties ever to grace the Earth, and yet most fans seemed to accept that it would never hit the big screen again. Most hoped, of course, but it felt like the franchise had grown stagnant under Lucas. That’s certainly changing.

Star Wars is alive and thriving once more. After purchasing the rights for $4.5 billion, Disney formulated a plan similar to the one that Marvel – under Disney’s stewardship – has rode to huge success. It makes sense. The franchise is already established, and the fan base is hungry for more. Plus, a property like Star Wars has countless possibilities that go beyond the core characters. Books, comics, and video games have done well working on stories set within the Star Wars framework set hundreds, even thousands of years removed from the events of the films. The property is vibrant and ready to be mined. And Disney knows it.

For the new owners, earning back the $4billion shouldn’t be all that difficult, as long as the studio continues to put out films. The new trilogy (that will begin with a JJ Abrams directed film) alone should come close to recouping the sale price, so additional films are all bonus. Disney will be printing money soon enough, and spin-off films that complement the primary trilogy in the works are just gravy.

Less than 24 hours ago, Lucasfilms confirmed that two such spin-offs had officially been greenlit. The subjects of those films weren’t revealed though, leaving the Internet to do what it does best: wildly speculate (often using cat-themed memes).

Yoda and Jabba the Hutt were two of the more common rumors, but today Lucasfilms pulled back the curtain and announced that the upcoming spin-offs would feature Han Solo and Boba Fett.

The Han Solo film will take place between Revenge of the Sith and A New Hope, while the time frame of the Boba Fett film isn’t exactly clear. It will reportedly occur during the original trilogy, and either take place between A New Hope and The Empire Strike Back, or between Empire and Return of the Jedi, which would likely focus on Fett transporting Solo to Jabba the Hutt.

As noted in the earlier announcement, Lawrence Kasdan and Simon Kineberg have been hired to write the spin-offs (and both are also working on the new trilogy). No yet word on potential directors.

It’s also far too early to think about casting, but the role of Boba Fett could go to Temuera Morrison. In the prequel trilogy he starred as Jango Fett; and since Boba is a clone of Jango it would stand to reason that Morrison would be the first choice – unless Disney wants to go with a bigger name in the main role, which is always possible.

As for the Han Solo film, Ford was 35 when he filmed A New Hope, which means that whoever is cast to play Solo should be younger – perhaps much younger depending on the path the story takes.

The news will likely cause some mixed emotions from fans. On one hand it’s nice to see the franchise back in a big way, and both Han Solo and Boba Fett are obvious fan favorites. On the other, these films will be even more prequels to a story that has been very, very thoroughly explored. The Star Wars universe is vast, and the potential to expand the story is massive. There is no reason not to film an entirely new plot set centuries apart from the original material – beyond, of course, the financial risk.

Disney is a company – and like any company its primary goal is to be successful. It makes sense to stick with what has a proven record to work. Most fans will eagerly throw money at whatever comes to the big screen emblazoned with the Star Wars title on it (us very much included), so there isn’t a huge need for Disney to stray from what it assumes will work.

Although Han Solo and Boba Fett films are confirmed, that in no way means they’ll be alone. They are likely just the first of several spin-off films released in the coming years. The Yoda standalone movie rumors refuse to go away, and – despite his denial – hints of a Zack Snyder-directed, Seven Samurai-inspired Star Wars standalone film were some of the first to surface and continue on.

How to play co-op in Lego Star Wars: The Skywalker Saga