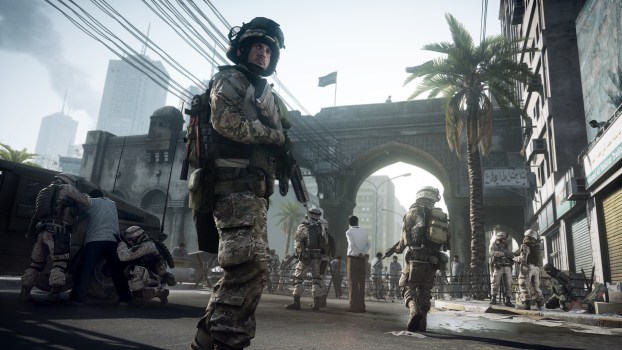 Britain’s Ministry of Defense wants to update its solider training tech and is looking at Xbox games with an envious eye. Apparently, newer recruits who have grown up with the latest generation of gaming consoles tend to lose interest with the MoD’s unrealistic simulated training war games.

The MoD currently uses something called Battlespace2; troops that were sent to Afghanistan had training with this digital war simulator. However, the older system’s clunky graphics don’t measure up to popular commercial first person shooters such as the Call of Duty series, Battlefield 3 or Killzone 3. The military just hasn’t had the money to keep up with the advances of the lucrative gaming industry.

In an interview with The Guardian, Technical team leader for the MoD’s Science and Technology Lab, Andrew Poulter said: “Back in the 1980s and 1990s, [defense] was far out in front in terms of quality of simulation. Military-built simulators were state of the art. But now…you can buy a commercial game that will be far more realistic than the sorts of tools we were using. The truth is, the total spending on games development across the industry will be greater than spending on [defense].”

The military has generally been steering towards cost-effective technology improvements–such as giving recruits iPad’s instead of having to continuously update large training manuals, as well as relying more on digital battle simulators as training budgets get cut. Poulter points out that live training can be cut down and could serve the purpose of cementing skills already learned in digital training; this would mean less resources consumed, such as ammunition, explosives or using tanks and other military craft.

Poulter and his team are working on better image generation, and are focusing on more realism as opposed to the entertainment focus of commercial games. Though plot will still be needed by the military games to immerse recruits, Poulter wants to prioritize how “credible” the mechanics are, for example: how far bullets travel, how digital cars respond to controls, or the atmosphere when a convoy gets bombed. However, ultimately the goal is to engage recruits so they remember their lessons on the real battlefield.

“Virtual Battlespace is quite good fun, and we want trainees to want to do training,” said Poulter.

Topics
This console generation isn’t about games or hardware. It’s about services
Best video game deals for January 2023: PlayStation, Xbox, Switch
Best PS5 game deals for January: Hours of AAA entertainment from $17
The best Xbox Series X games for 2023
Xbox just surprise announced and released a stylish new Game Pass title
The Elder Scrolls Online’s 2023 updates bring players back to Morrowind
How to cheat in Words With Friends
Shoulders of Giants brings mascot-era nostalgia to the roguelite genre
The best PSVR games for 2023
Like a Dragon: Ishin’s Trooper Cards are full of cameos, including Rahul Kohli
How to romance characters in Fire Emblem Engage
How to eliminate enemies with no ranged weapons in Fortnite
Fire Emblem Engage gift guide: every character’s favorite gifts