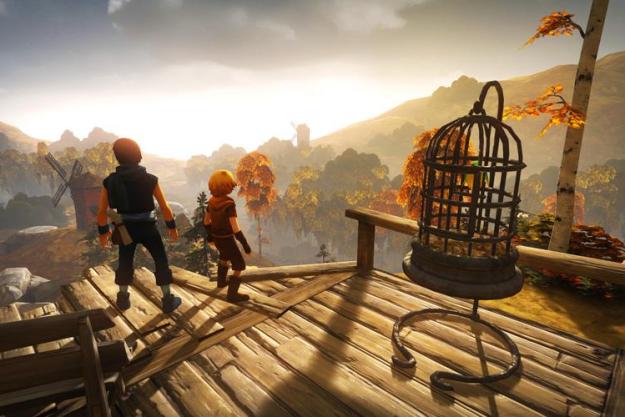 “I appreciate games such as Heavy Rain and The Walking Dead which have a more cinematic feel, but I think they are too close to a movie experience,” said Josef Fares, game director of Brothers: A Tale of Two Sons, “More attention should be given to the interactive aspect.”

In his debut, Fares made the game he wants to play, one that ties story and action together seamlessly. No quick time events, no long dialogues. Brothers yields control in telling its sorrowful, lovely story, handing the player a shocking range of influence with elegant, simple controls. It shares ambitions with some of the most respected and adored games ever made — Ico and Journey loom large — but it tells a more complete, human story than either. How well you come to know the game’s siblings depends entirely on how you play, how willing you are to experiment and push into the world.

Bold statements, and equally broad, but there’s a reason to be vague about Brothers up front. Even if it requires blind trust, it is recommended you just go play the game. Brothers is important. Literally every second amounts to a spoiler, so there’s no way to properly talk about it without ruining some of the magic in experiencing it firsthand. If you need more convincing, read on.

The opening seconds of the game: a little boy sits in front of a grave with a flower on it, outside a small house. Nearby, an older boy helps a coughing man onto a cart. The man has the younger kid’s hair but the older kid’s sloped shoulders. All that’s enough. You immediately know who these people are. These two kids are brothers and the sick, weak man they resemble, their father.

Even before we see a brief flashback to her death, we’ve deduced that their mother is dead. The headstone is marked with a feminine flourish, the flower, and the boys are left helping the father on their own. Mom’s not around. Small details like these underline every moment spent in Brothers‘ fantastic world, and they fill you in without ever saying a word.

Outside of the menu where you can select “Play” or “Continue” and a diagram explaining the four-button controls, there is no verbal language of any kind in the game. When the characters speak to one another, it’s in a non-subtitled, fake language. Their speech is muted as well, heard at a slightly lower volume than the music and ambient noise in the game. Words aren’t necessary. Everything you need to know is either in plain sight or is something you can touch.

The left and right analog sticks on the controller move the older and younger brothers, respectively, while the left and right triggers allow each to interact with the environment. Moving the boys is hard at first. You know you want them to walk in the same direction, but moving two people simultaneously is jarring.

Both boys need to hoist the cart because it’s so heavy. Not only do they have to carry the cart, but they have to move in separate directions to steer past tight corners. Think of every time you’ve had to move a couch into a room, but instead of just working with a partner, you have to work both ends.

The doctor’s place is just past a mechanical bridge and an elevator. Only the older brother can work the heavy pulley to move the bridge. When they come to an elevator that’s raised, the younger brother has to be lifted onto a cliff edge. From here, he lowers a rope that provides his older sibling access to the controls for a nearby elevator.

These first little tasks give you a feel for how the brothers work together. They serve to ease you into the more challenging tasks that await later on. A couple of hours later, when you’re guiding both brothers up a rock face or steering them away from invisible monsters, you find that you’ve been well-prepared for controlling two people at once.

Brothers would be frustrating if the interact triggers didn’t work so seamlessly. When you see something you need to do, you simply walk over to it and press the single, all-purpose button. Want to swing from a rope? Use a saw to fell a tree? Pet a friendly cat in town? Toss the crucial part of a massive machine to one brother across a chasm? Just walk up to an object or stand where you think is appropriate and pull the trigger.

Brothers understands what you want to do based on the situation and it feels wholly alive as a result. This is reinforced by the absence of unnatural highlights or markers in the game world. The cat doesn’t have an arrow over it, the machine part doesn’t glow. Games, especially in the HD era when backgrounds are so detailed and dense, typically have to go out of their way to tell you what you can and can’t touch, but Brothers is prepared for you to touch everything that might catch your eye. Even the things that you don’t have to touch to push the game forward.

Your interactions with the world also serve to highlight each brother’s distinct personality. Early on you meet an old man strumming a harp near a river crossing. When he offers the two boys the chance to play it, the older brother plunks out a dissonant series of notes while the younger one cobbles together a melody. Further down the road, the boys meet a gardener. The older brother politely asks for directions, only to be waved off by the stuffy worker. The younger brother is more brash, slapping the unhelpful man right in the ass when he turns back to his work. These encounters are optional, but they say much about who the boys are.

Encounters in Brothers aren’t always so light-hearted, but curiosity is always rewarded with character development. Early on, you come to a crossroads on your way up the mountain range whose peak is your ultimate destination. To the left is a wide road that leads to an enormous tower. To the right is a little, sloped side path, but you can’t see what’s down the hill.

Follow the path on the lift and you soon see a man preparing to hang himself. You can simply watch him die or you can come to his aid, knowing that the two brothers are not necessarily strong enough to help. Whether or not you choose to save him, the rest of the nearby surroundings are obscured until the event plays out. Afterward, you can see a burned house with two bodies covered in blankets nearby, one large and one small. Brothers‘ visual language at work.

The grieving man weeps if you save him, and there’s no further way to interact with him. Loss is an inevitable part of life, the game implies. You didn’t know why this man wanted to hang himself when you first encountered him, but you made a choice to save someone who no longer wanted to live. For all that weight a choice like this places on the characters, and you through them, it does so purely through interactivity and visuals.

There’s also remarkable amount of joy in Brothers. Dotted across the landscape are stray benches where the two siblings can sit down and look out on their world, perhaps to reflect on this arduous journey. The relief and beauty held in these moments is literally tangible thanks to your grip on the controller’s triggers. Who knew such a simple interface could be so powerful? The boys get to have fun too, like when they happen upon a hang glider. Hearing them laugh and yell as they shove their weight to the left and right, is a welcome release.

Like Journey, Brothers is about the loneliness and the celebration of sharing a profound experience. Even when you have a partner, a family, you are also always going to just be yourself. And unlike Journey, Brothers is played entirely solo, a personal experience that illustrates how two people can overcome the inherent isolation of being alive through friendship and family.

Brothers is grounded and human, its play built on touching the physical world and experiencing the ecstasy and loss that comes with being a part of everything. Where Journey was spiritual and ephemeral, delivering an impressionistic revelation as you climbed the mountain, Brothers is the opposite. Catharsis comes from the descent, not the climb.

That is what Josef Fares and Starbreeze have done here. Their work boils video games down to their most essential tools — manipulating an object on a screen and pressing a button to effect change — and uses those tools to tell an astoundingly affecting tale about complex people. If you touch it, it’s impossible to not be touched back.