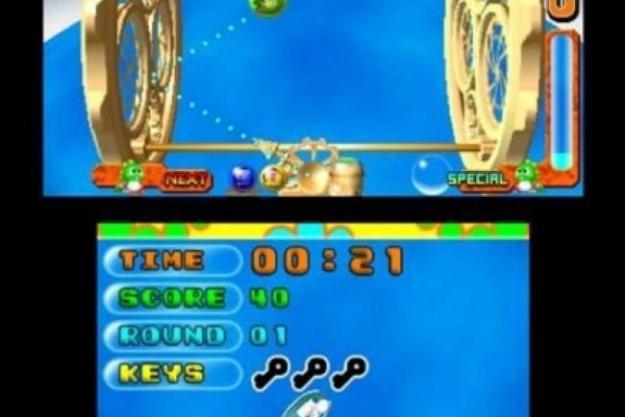 There are two things working for Bust-A-Move Universe, and two things that work against it. Whether or not they cancel each other out is a choice each purchaser will have to make.

The first thing working against Square Enix’s Bust-A-Move Universe (henceforth known as BaMU for ease) is that this game is more of the same. The franchise is one of the longer running puzzle games that isn’t called Tetris, and the 3DS version offers very little to push the genre or move the series forward. People hoping to try something new will be disappointed.

The second thing working against BaMU is that there is even less of it than in previous games. There is a disappointing lack of features, and only two game types are available: puzzle mode and challenge mode. The puzzle mode is the campaign-ish version of the game, with increasing levels of difficulty and even boss fights (although they are more of a bonus stage and less of a fight). The challenge mode is essentially a time-based trial that has you play the game with a timer that encourages the high score rather than just progression. There is no versus mode, and not even an online leader board.

Those are the drawbacks to the new BaMU, but there are also a few things that work for it. The first thing is that while it is an old formula, it is one that works. The game is just fun, and the puzzle style always has been. There is a reason that games like this and Tetris work—they are just fun and easy to play, and while the difficulty can make it challenging, it is a title that can appeal to anyone young or old. There are a few minor inclusions like special bubbles, but while they can help on later levels, they are a minor addition that most won’t even use.

The second things that works, and the thing that makes this title a possible “must-have” for the Nintendo 3DS on its launch day is that the game is cheap. At $29.99, it is the least expensive title of the new system, and that makes it worth the money.

Of all the launch day titles for the 3DS I have played, I find myself coming back to this one the most. It is somewhat shallow, and the lack of features is somewhat sad. The graphics aren’t all that impressive either, and the 3D is wasted on a 2D puzzle game, but it is a formula that people keep coming back to for a good reason—because it is fun to play.

It isn’t the deepest game ever made, and technically it isn’t even the best game on the 3DS, but it is fun to play, and it will be an inexpensive addition that all new 3DS owners looking for a puzzle game should consider.