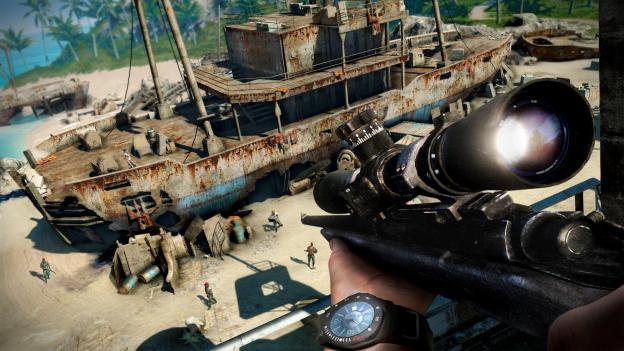 The Far Cry series was created around the idea that while you had a mission to complete, how you complete that mission was entirely up to you. The game, originally developed by Crytek, gave you a big area to roam but ultimately you were still being pushed in a specific direction. When Ubisoft took over the series and released Far Cry 2, that mentality continued and the areas became bigger, but the narrative kept you moving in one direction even though you could choose to go on the occasional walkabout. Far Cry 3 has taken that idea and evolved it.

Far Cry 3 is massive. It features two major islands, as well as several smaller ones that you can also explore. The plot is less structured than in previous games, and it actually resembles Assassin’s Creed in a few ways — at least in the demo that Ubisoft is currently showing off.

Areas will be teeming with enemies, but there are two things you should do before really exploring that area. The first is that you activate a radio tower by climbing to the top, similar to the viewpoints in the AC games. There are several towers throughout the islands, and once you have activated it, the previously grayed out section of the map surrounding the tower reveals what options you now have in that section of the world. The second thing is to find and eliminate enemy strongholds.

These are highlighted by plumes of smoke, and can also be identified by all the people there that want to kill you. While the enemies control these strongholds the territory surrounding them is hostile to you and will remain so until you take the base. And the enemies can be dogged, relentless, and numerous. This gives you plenty of options to practice your murdering skills using one of the several weapons you have at your disposal, but assuming you are tired of being chased like The Beatles in A Hard Day’s Night, assuming all the girls in the 60s wanted to stab John, Paul, George, and Ringo, you need to control the strongholds to have some peace.

Each stronghold is staffed by a variety of enemies which you can use your camera to identify and mark. There is also an alarm that they can and will make a break for once you make your presence known. This means you have options. If you want to take your chances and go in like the Angel of Death you have that choice, but the game isn’t designed in a way that lets you easily crush the opposition. It is certainly doable, but you can’t just attack without thought or you will die quickly.

The better option is to take your time and plan things out. Using a bow you can silently eliminate enemies that are out of sight of others, which may allow you a clear path to deactivate the alarm. Of course, each stronghold is set up differently, with different topography that allows for a different approach. Each base also has a few unique features, including the occasional explosive elements and the odd caged animal. As any gamer can tell you, if you have the chance to unleash a wild and vicious animal on a group of unsuspecting guards, you take it.

After the guards have been dealt with, you then control the area and your allies will appear. This makes things much easier and safer for you throughout that territory, and it unlocks several quests as well. It also opens the area up to fast travel from one section to another.

These quests may range from collecting certain flowers that you can then use in a crafting mechanic, to more intensive quests against enemies. You can also go off and do some hunting. Once an area has been cleared, the map also shows what animal is dominant in a particular area. Like in Red Dead Redemption, animals can be hunted and skinned to earn you money. The money then can be used to purchase items, weapons, and upgrades for existing weapons.

The gameplay is traditional FPS, and it moves very well. The vehicle options felt smooth in the brief demo, and there are plenty of other control options like hang gliding and jet skis. At a glance it all moves and plays admirably, although the demo was brief. Things are looking good on that end though.

The more that is revealed about Far Cry 3, the better it looks. The tower and the stronghold harkens back to Assassin’s Creed and other territory-based games, and that works for the FPS style Far Cry 3 is created around. The missions are going to be what makes this game or breaks it, but the elements for a great game are there.

Monster Hunter Rise won’t support cross-progression between PS4 and PS5
The most innovative gaming tech of 2022
The best Android games available right now (December 2022)
Monster Hunter Rise is coming to PlayStation and Xbox, minus cross-platform saves
The best weapons in Modern Warfare 2: every gun ranked
Pokémon Scarlet and Violet: How to beat the Elite Four
The best Intel processors for 2022
Call of Duty: Warzone Mobile: release date and preregistration details
Best gaming laptop deals: Save on Alienware, Razer and more
‘Wordle’ today, December 2: Answer, hints, and help for word of the day (#531)
Elden Ring for PS5 is $15 off with delivery in time for the holidays
The best iPhone games to play in December 2022: Marvel Snap and more
Destiny 2: Where is Xur for the weekend of December 2