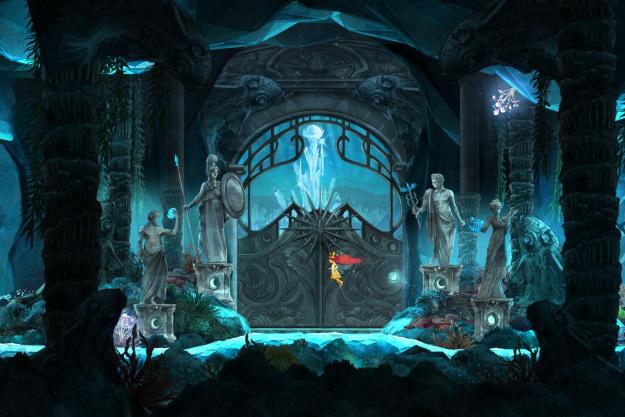 “Child of Light is a beautiful adventure through a whimsical fantasy world, but its story lacks emotional resonance.”

Child of Light feels like an RPG by way of a “connect the dots” children’s puzzle: For all of the color and simple beauty filling out the 2D world of Lemuria, it feels empty. Soulless. You travel from place to place, chipping away at the story and leveling up your powers as you go, but you never form the emotional attachment that the game reaches for. You’re just connecting the dots.

Child of Light feels like an RPG by way of “connect the dots” children’s puzzles.

It gets off to a promising start. Beautiful hand-drawn art, rendered by the same UbiArt Framework engine that’s powered recent Rayman games, introduces Child of Light’s fantasy world and the young girl who finds herself stuck inside it. Aurora is the daughter of an Austrian duke, but when she falls ill and dies, she awakens to find herself laid out on a stone slab in a strange, magical land.

Mechanically, there’s a very traditional RPG at the heart of this game, albeit one that’s been gussied up with unique accoutrements that help define it. The 2D, side-scrolling presentation initially carries the vibe of a platformer, though Aurora’s fairy wings, unlocked early on, quickly turn each space into a freely navigable playground, and each hidden secret into a puzzle to be solved.

Lemuria is rife with secrets. Every new location is filled with nooks and crannies that conceal treasure, stat-boosting “stardust,” side quests, and more. For players that like to explore and collect, there’s a lot of satisfaction to be found in simply wandering through every new space you visit. Especially with your constant companion, Igniculus the firefly, helping to light the way.

Igniculus fills a variety of roles in Child of Light. You control him with the right analog stick, though a second player can drop in at any time with a second gamepad to take control of the firefly. He’s not bound by the physical barriers that occasionally block Aurora’s progress when you’re out exploring, and he can crack open certain chests, interact with buttons, and light the way in dark spaces.

You’ll need to use Igniculus — with the right analog stick, or with a second player wielding a second controller — to solve an assortment of puzzles, but he’s also a handy helper to have in combat. Several allies join with and fight alongside Aurora over the course of her adventure, but Igniculus plays more of a supporting role. Child of Light’s combat system is built around a timer that dictates when each participant may act, and the firefly can spend “wishes” from a meter to slow down the progress of individual enemies on the timer, or to heal allies.

It initially feels gimmicky, but the firefly’s combat capabilities quickly become an important strategic component as the enemies arrayed before Aurora grow stronger. There’s a bit of trial-and-error at work here as you learn about each enemy’s elemental weaknesses and counterattack capabilities – some counter when staggered, or when hit with physical/magical attacks, for example – but there’s no way to simply ignore Igniculus.

After spending 10 hours in Child of Light’s colorful world, the oddest sensation settles in: ambivalence.

While exploration and combat come with some strong hooks, the story — arguably the heart of any great RPG — simply meanders along. Part of the problem is the fact that the writers chose to realize the game’s script as an epic rhyming poem. Every shred of dialogue follows (or attempts to follow) a loose rhyme scheme, even the incidental bits of babble uttered by the random NPCs you encounter in towns.

It’s a clever concept, but the execution is far too uneven. Here and there, a verse will shine, but there’s no cohesive rhythm throughout the piece. You spend so much time figuring out how you’re supposed to read individual passages – where the beats are and such – that exposition becomes a secondary concern. It’s exhausting. You know there’s a problem when the most mentally taxing element of an otherwise challenging video game is reading the dialogue.

Even if you do manage to stay focused and keep up with the story, it’s just not that engaging. Child of Light’s tale feels like a mish-mash of other RPGs, especially as new followers join your party with their too-familiar tales of woe in tow. It gets to be downright intrusive at times, especially after adding all of them. As your party grows, each battle is inevitably followed by an all-text exchange between two or more characters. A handful of these might have helped add character, but they pop up in tiresome abundance, especially later on.

After spending 10 hours sweeping through Child of Light’s colorful, lyrical world, the oddest sensation settles in: ambivalence. Lemuria is a beautiful place, but the characters that inhabit it and their individual stories fail to resonate. You’ll enjoy filling in the larger picture as you connect each dot, but like those classic children’s puzzles, all efforts are forgotten as soon as you turn the page to your next game.

This game was reviewed on an Xbox One using a code provided by Ubisoft.