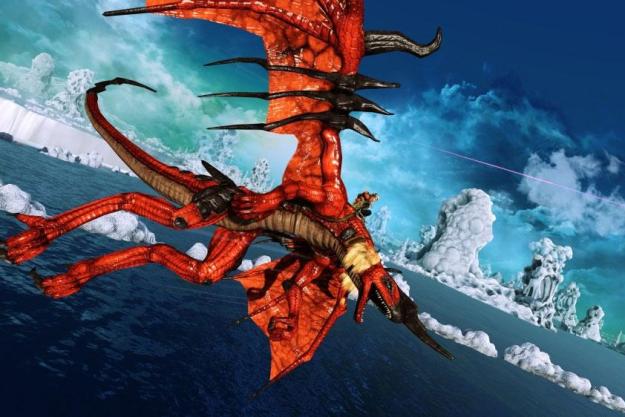 “Crimson Dragon looks and feels like an Xbox 360 game that's been spit-shined to fatten up the Xbox One's launch lineup of games.”

What is it with console launches offering up dragon flight simulators that aren’t nearly as awesome as that combination of words suggests? It happened on the PlayStation 3 with Lair and it happens again on the Xbox One with Crimson Dragon.

Check your expectations, people. This spiritual successor to the Panzer Dragoon series may be an Xbox One launch title, but it feels every inch like an Xbox 360 game that’s been spit-shined and held back to fatten the new console’s day one lineup. There’s a lovely sheen to the visuals, but beneath this is a clunky interface of menus and button prompts that feels out of place alongside the other Xbox One launch titles. It feels like the product of another time.

There’s a certain amount of sense to this, given the source of inspiration. Fans of the Panzer Dragoon series will likely find the most to like here. Crimson Dragon delivers (largely) on-rails shooting action, all from the back of a winged dragon. The action spilling across the screen verges into “too busy” territory more often than not, but there’s definitely an audience for the flavor of 3D bullet hell that this game plunges you into.

The controls are simple enough to grasp. The left thumbstick moves your dragon around the screen and the right stick moves its aiming reticule. One trigger fires, the other switches between attacks, and the two bumpers handle left/right barrel rolls. Using all of these tools together is necessary. You’re constantly weaving circles around the screen with one thumb while aiming and firing with the other, all while rolling clear of incoming attacks when the swarm of incoming fire blots out the sky.

Crimson Dragon is designed very much in the mode of classic arcade games: the story is nearly non-existent and competent play depends on finger dexterity and repetition. Each stage breaks down into multiple phases; some focus purely on combat, others on bosses, still others on following a set path as you pick up a string of collectibles. Your performance in each stage is awarded a letter grade, and your grade for a full mission is determined by averaging these out. Every first runthrough of a level is meant to be a struggle; it’s only after repeat plays that you have the knowledge of the layout and dragon firepower to score higher grades.

This might not be the Xbox One launch lineup’s Perfect Dark Zero, but it’s not a day one purchase either.

The better you do, the more credits you earn for spending on new dragons, wingmen (which offer limited-use screen clearing attacks), and revival jewels. All of these have their uses. New dragons offer new elemental attacks – you can also feed and “evolve” your owned dragons to boost their stats – and wingmen – which provide combat support and limited-use special attacks – can be hired from a list that includes dragons owned by your Xbox Live friends. The lite RPG elements don’t amount to a lot, but they offer a few hooks for building up your player profile between missions. Unfortunately, the in-game economy is hampered by an unfortunate focus on microtransactions.

You’re able to play Crimson Dragon without spending any extra money, but mission rewards are low enough that you often end up having to repeat missions just to buy gear – particularly revival jewels – that you’ll need for subsequent missions. The alternative is to spend real dollars on in-game “Jewel” currency bundles. It’s the economy that’s the problem. Why should a player have to repeat missions just to advance through the story? That’s a free-to-play mindset, and it feels out of place – even a little slimy – in the context of a game that you’ve already paid $20 to experience.

Crimson Dragon also suffers whenever you’re sent out into one of the game’s handful of free-flight missions. Most of the game is spent shooting at enemies on rails, but there are a few missions that throw your dragon into a 360-degree maneuverable space. For these sections, the stick that controls your dragon’s movement/speed also shifts the camera around. It’s not an elegant setup at all, since the impulse is to pan the camera around before you change direction.

This might not be the Xbox One launch lineup’s Perfect Dark Zero, but it’s not a day one purchase either. Crimson Dragon may please some fans of the Panzer Dragoon series, but it’s a rough game that feels out of place alongside the other games available for Microsoft’s new console. Skip it, unless you’re a fan.

The best PS5 controllers for 2023
The best upcoming PC games: 2023 and beyond
The best upcoming PS5 games: 2023 and beyond
PS Plus adds Evil Dead, OlliOlli World, and more in February
How to charge a Nintendo Switch controller
Best gaming laptop deals: Save on Alienware, Asus and more
Best Alienware Deals: Save on gaming laptops, PCs and monitors
The best video games of January 2023: Hi-Fi Rush, Dead Space, and more
With Valiant Hearts: Coming Home, Netflix finds its video game voice
The best guns in Dead Space
The Crew Motorfest brings a racing festival to Hawaii this year
The best skills to inherit in Fire Emblem Engage
Dead Space: how to fix the centrifuge