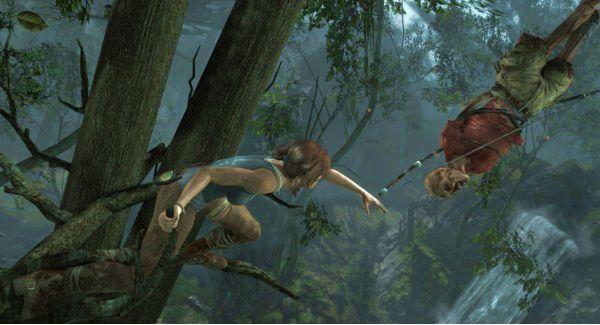 When Crystal Dynamics first showed off the new Lara Croft in action at E3 2011, there were some questions as to whether this origin story would still deliver the type of adventurer that fans have grown to love through the many games and occasional films. The Croft shown early on was literally fresh off the boat, shipwrecked on an island and completely out of her element. But at E3 this year, the developer teased a glimpse of where Miss Croft is heading. A sequence, which occurs about half-way through the adventure, showed an agile and adept Croft using cover, explosive-tipped arrows and machine guns to take out an army of bad guys while on the run. At Gamescom 2012, Square Enix offered gamers a hands-on experience with the new Tomb Raider.

“Last year was all about survival and setting the tone of the character, now you’re going to really get to know her,” said Karl Stewart, global brand director for Crystal Dynamics on Tomb Raider. “You’re going to see how she takes a turn in her character to make her stronger. We all want to see Lara get some action/adventure and this is it.”

The game, which hasn’t been rated yet but is almost certain to garner a Mature rating, showed an intense near-rape sequence at E3 2012, where an assailant finds Croft in hiding and she has no choice but to kill him. This game’s dark and personal themes separate this Tomb Raider from some of the most recent adventures.

The new Lara Croft is intuitive to control and the real-time gameplay blends seamlessly with the Hollywood CGI cut scenes. The open world of the island is gorgeous and the gameplay is so cinematic, attendees waiting in line stood mesmerized watching others play the game.

“Our goal in the first hour of gameplay is to set you on a path where she’s becoming that action/adventure hero, that character you really want to understand a little more depth about,” said Stewart. “She goes through a pretty intense situation to get her to that point.”

The gameplay also features a more open environment of exploration and puzzles that are more woven into the fabric of the story. Once Croft finds her trusty bow, she becomes a sharpshooter with this silent weapon, allowing players to navigate the island from a stealth perspective.

“We get to see how she grows and gets her new bow, her first piece of equipment,” said Stewart. “We teach you about some of the base camps, gear gathering and how you’re going to be able to improve that over time, and reveal where she gets her skills.”

Croft is not alone on the island. In addition to the aforementioned “bad guys,” there are also fellow shipwrecked passengers. Whitman is one of the characters introduced in the hands-on demo. He’s an archeologist, and in some ways, a mentor to Croft.

“He gives himself up far too easily in this demo when Lara is captured,” said Stewart. “He’s a character that we play out quite a lot inside the game, because he’s a great segueway to be able to show you the growth of Lara. Alongside a character that has some real experience in exploring, so there’s a real dynamic relationship to it.”

While there have been plenty of colorful characters in previous Tomb Raider games, the sheer size of this game’s cast and the different personalities introduces a new story-driven element to the game. In the demo, one of Croft’s friends is kidnapped by the inhabitants on the island. Those types of situations add a more personal element to the missions that evolve in the game.

“In the past, Tomb Raiders have felt very staid and staged,” said Stewart. “Now, we give the player the opportunity to be able to truly explore and get to see a side of Lara which they’ve never seen before, which will bring them closer to her and have a little bit more emotion and relevance as they play.”

Having played through the demo, it’s obvious that this Tomb Raider is a very different experience from previous iterations. While there were hardcore gamers that loved the complexity of past games’ puzzles, many of the people who became familiar with Lara Croft primarily through the Angelina Jolie movies and other marketing, may not have actually enjoyed playing the games because of the difficulty level.

“When we started reimagining the franchise of Tomb Raider, we wanted to open the gameplay experience to a broader audience,” said Stewart. “For 15 years, it was all about puzzle solving, exploration, and combat. There was a very hard skew towards 80-percent puzzle solving. Now we’ve broken all those pillars down and rebuilt them back up in a way that is more akin to a mainstream audience. We still have our puzzles, but now it’s called smart, resourceful, Lara. It’s about teaching the player about survival instincts and understanding the world.”

Exploring the island is a very intuitive experience. The game walks players through the bow by challenging them to shoot a deer in the woods before taking aim at actual enemies. And the controls are easy to pick up and play, although there’s depth in the gameplay as Croft acquires new skills and abilities along the way. Stewart promises that by the time Croft has all of her capabilities, controlling her through the open island world will be a fun experience.

“We’ve built an entire new combat system and brought in a whole new team to be able to reimagine it,” said Stewart. “Combat compliments the new exploration. In the past, Tomb Raider was a very linear experience. If you remember, she used to jump from ledge to ledge. Now we’ve given her dynamic movements and the ability to be able to come into a space and truly explore.”

Although gamers won’t be able to explore this world until March 5, 2013, Crystal Dynamics has allowed fans at Gamescom, GameStop EXPO, and PAX Prime to get a taste for the single player action. And sources have told me that the new Tomb Raider will also unleash multiplayer action, so that’s something else to look forward to.

The best indie games on PS5
A new Tomb Raider game is in development on Unreal Engine 5
Vampire: The Masquerade – Swansong is a true detective game
Can’t wait for Elden Ring? Play these games in the meantime
Pokémon Scarlet and Violet: How to beat the Elite Four
The best Intel processors for 2022
Call of Duty: Warzone Mobile: release date and preregistration details
Monster Hunter Rise is coming to PlayStation and Xbox, minus cross-platform saves
Best gaming laptop deals: Save on Alienware, Razer and more
‘Wordle’ today, December 2: Answer, hints, and help for word of the day (#531)
Elden Ring for PS5 is $15 off with delivery in time for the holidays
The best iPhone games to play in December 2022: Marvel Snap and more
The best Android games available right now (December 2022)