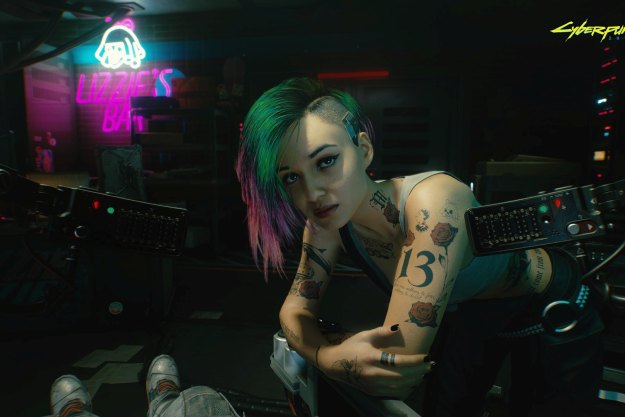 Cyberpunk 2077 post-patch review: A car crash of a game you can’t turn away from
MSRP $59.99
Score Details

“Cyberpunk 2077 dazzles at times and disappoints at others. What could have been exceptional is deeply flawed.”

Editor’s Note: Due to the issues with Cyberpunk 2077‘s launch, the Digital Trends staff decided to withhold our final review of the game until after the game’s Day 1 patch was released. The following review is based on the patched version of the game. Please note that the experience greatly differs on Xbox One and PlayStation 4 and we do not recommend purchasing the game on those platforms at the moment.

One of the sidequests in Cyberpunk 2077 paired me up with a character for an easy job that paid well. Further jobs with that character solidified our bond. I was no longer invested in the missions for the money and street cred — I was in it for the relationship.

The revelation that they had been using me all along for nefarious purposes hit me like a ton of bricks, despite the fact that it wasn’t me. It was V, the avatar that my adventures in Night City were being experienced through. I hadn’t realized how invested and immersed by Cyberpunk 2077 I had been until this moment. Never in an RPG had I experienced this kind of feeling: That I felt like this was a real person that had manipulated me into carrying out their revenge plot.

I decided to refocus my attention on the mainline story, in order to get my mind off of the personal betrayal I was just dealt. I had to meet up with a fixer, a mercenary who organizes different jobs, at a bar. As I arrived, I remembered the character that had been using me moonlighted as the bartender at this establishment. I was hoping it’d be their night off.

But they were there, and it was if the entirety of our adventures never even occurred. No dialogue options to discuss it, no awkwardness to our interaction. It was almost as if this person was a completely different character than the one I’d spent all those hours with. As if their identity as a bartender was a separate non-player character (NPC).

Never in an RPG had I experienced this kind of feeling.

All I could do was laugh. This was just another instance of Cyberpunk 2077  being Cyberpunk 2077. It’s a game that, like a work of art, is immaculately designed and thought-out, but must not be touched lest you ruin it. It’s something that you are in awe of one moment, and detest the next.

Night City is jaw-dropping … on PC

I have now played Cyberpunk 2077 on a variety of platforms, including a desktop PC that is running the game at ultra settings, Xbox Series X, Stadia, and GeForce Now. And it’s my informed opinion that if you are planning on playing the game on console, you simply shouldn’t right now.

Even on Xbox Series X, where the game is markedly more stable than on last-generation consoles, it’s a disappointment compared to the next-gen visual delights afforded by games that are optimized for the system. Wait and see what the next-gen patch brings early next year— don’t taint the experience now.

Surprisingly, streaming is a much better way of playing the game, either via Google Stadia of GeForce Now. Stadia is a more pleasant app to interact with than Nvidia’s offering, and if you sign up for a Pro membership to unlock 4K, it provides you with a $10-off coupon to spend on the game.

GeForce Now, a subscription to which is cheaper, offers a marked visual improvement over Stadia, and even supports ray tracing, something that consistently crashed my expensive PC rig due to some bug. According to CD Projekt Red’s own technical requirements, it should support it just fine, but that’s not the case. GeForce Now also has the added advantage of connecting to a PC’s games library, so unlike Stadia, it won’t require a separate purchase or save when playing on a computer.

For those who have the internet connection for it, streaming is currently the best place to play Cyberpunk 2077 outside of an expensive PC.

For anyone with an expensive PC, however, Cyberpunk can be a glorious experience. The design of Night City, a metropolis that stretches along the Pacific Coast, feels unlike any other open world location I’ve experienced. It’s not only vertically impressive, with its brutal skyscrapers, but horizontally, with crisscrossing highways, bridges, and walkways that help the city feel like a beautiful, chaotic mess.

The facial animations also dazzle, which is often not the case with other open world titles. The reason I got so caught up in the aforementioned side quest was because of how much emotion was being expressed through the character model. It’s a key element to world building that the game nails.

Playing on PC, where I’ve spent the majority of time with the game, is a stable experience for the most part. There are certainly some silly bugs, and as I mentioned, I had to disable ray tracing to prevent it from crashing. But if you can tweak your rig to the optimal settings, it’s generally solid. The problems with Cyberpunk 2077, however, run much deeper than its glitches.

There are three lifepaths in Cyberpunk 2077: Nomad, street kid, and corpo. Choosing one will start you off in a different part of Night City, with a different background and agenda. Your biggest confidant in the game, Jackie Welles, is either one of your closest friends, or a complete stranger at this time.

If you have an expensive PC, Cyberpunk can be a glorious experience.

It’s initially impressive if you start multiple games with the different lifepaths, but in less than an hour, Cyberpunk quickly resolves those differences, and essentially resets every player’s character to the same status. From there on, aside from a handful of dialogue options, your chosen lifepath adds little to the gameplay experience.

This is one of the biggest signs that the game fails as an RPG, which extends to all the other systems in the game. Cybernetic upgrades don’t feel necessary to the gameplay, as only a few key ones are actual useful, along with your arsenal of weapons, which have no trouble mowing down your adversaries. When I get skill points, I’m honestly more annoyed that I have to figure out what to spend them on than I am excited to enhance my avatar, V.

Crafting is something that I’ve done once just to do it. Most items require key components that are hard to find or expensive to buy, and when you are able to craft or upgrade an item, it feels like it has little effect on the gameplay. With the amount of weapons to find, and objects to pick up, this game could have forgone crafting altogether.

Ammunition and health packs are abundant. I never drop below having well over 100 medkits at a time. As long as I keep cover close, I’m essentially invincible, even on the game’s hardest difficulties.

One of the key elements in the marketing for Cyberpunk was the interesting and flashy styles you could outfit your character with. Unfortunately, armor is tied to clothing, with no way to keep your look while using the defense buffs of another item. More often than not, your character looks like they just jumped into a thrift store dumpster and left with whatever clung to their body. It’s a good thing the game is in first person then.

Ultimately, the RPG elements are the weakest parts of the game. Cyberpunk is best enjoyed via world exploration, light stealth, and going heavy on the guns, while ignoring the majority of the role-playing aspects. They just bog the game down, and I wished that it simply leaned more into being a futuristic Grand Theft Auto title and that development time had been spent mastering a few key gameplay elements than being cluttered by a bunch of mediocre ones.

Also, I’m begging all you NPCs. Stop calling me every waking moment with a new job and vehicles to sell me. I can find all of them on my own.

Corpo through and through

For a game that’s called Cyberpunk, there’s a ton of cyber, and very little punk. It’s weird to play this title in a year that has gone a long way to bring movements like “Defund the Police” to the forefront.

It would be different if the game had something interesting to say about the police. But there’s none of that in the game. The only thing it has to say is “not every cop’s a bastard.”

Ultimately, the RPG elements are the weakest parts of the game.

The number of times I am asked to assist the police is also ridiculous. My character is a violent, law-breaking mercenary. Why would a pillar of the side quests be to help the NCPD?

This thin and misrepresentative ethos extends to a lot of the game’s world building. I find individual characters to be great, and I was surprised at how, despite a few ill-conceived depictions of general identities, a majority of the independent personas are well executed. Some side quests with these characters, and the relationships you form with them, are wonderful. Others are baffling, mundane, and feel generically scripted, taking you out of an otherwise engrossing world.

All of these elements just remind you that Cyberpunk 2077, while worked upon by passionate developers, is the product of a corporate machine. One that wanted to make as much money as possible off of it and refused to give it the actual development time it required in order to launch during the holiday season. That leaned into a toxic community to build a fan base. That deceived its audience by hiding the console version of the game before its release. That refuses to say anything of value about the themes it presents to the player.

So while I’ve enjoyed my time in the moment-to-moment of the game for the most part, and will continue to do so, my experience is deeply marred by the external elements of the game and its developer, which consistently seep through in the design and writing.

Cyberpunk 2077 is a dazzling experience buried deep under layers of problematic waste in terms of gameplay, writing, and its politics both inside of it and outside in the real world. It’s a shame that this game doesn’t live up to its full potential.

Grand Theft Auto V does a lot of what Cyberpunk does best, and has had the years of refinement that Cyberpunk is in dire need of.

Mainlining the story will take you around 30 hours, with hundreds of hours of side quests and activities if you wish.

Not right now. Unless you have a top-of-the-line PC or wish to start investing in the emergent cloud-streaming offerings. Otherwise, wait for further patches and next-gen updates on consoles.

The best Apple Arcade games you should play right now
You can try Google Play Games on PC today as beta expands to the U.S.
You can get a free PC Game Pass subscription via Twitch subscriptions
Call of Duty: Modern Warfare II’s physical disc doesn’t actually include the game
Blaseball makes its absurd return in January with a dedicated mobile app
Amnesia: The Bunker takes survival horror into a ‘semi-open-world’ sandbox
Pokémon Scarlet and Violet Titans guide: locations, weaknesses, and more
All cross-platform games (PS5, Xbox Series X, PS4, Xbox One, Switch, PC)
The best weapons in Modern Warfare 2: every gun ranked
Pokémon Scarlet and Violet: How to beat the Elite Four
The best Intel processors for 2022
Call of Duty: Warzone Mobile: release date and preregistration details
Monster Hunter Rise is coming to PlayStation and Xbox, minus cross-platform saves