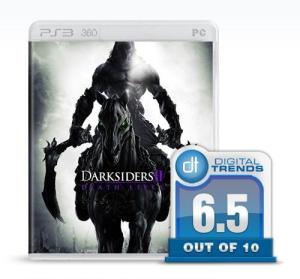 Darksiders is the coolest game about unemployment ever made. In most games about losing your job, the goal is blowing up the corrupt government that turned you into a violent killing machine. Boring. In Darksiders though, you play as War of the Four Horseman of the Apocalypse, wrongly accused of ending life on Earth before the Rapture was supposed to kick off. Not boring. Your goal is revenge on the people who cost you your job. War’s simple to understand so it’s easy to take up his cause. His skills are specified! How’s he supposed to find work now? Riding through the ruins of reality, kicking angel and demon ass alike until someone pays: Now that’s motivation. It just makes sense that Darksiders II should be cooler, right?

This time you’re playing as Death. Guy has even more reason to be pissed about jumping the Rapture gun. No more humanity means no more need for a Reaper so he’s bound to be angry and powerfully motivated. The sequel is also physically bigger than its predecessor. War was confined to Earth, but Death jumps between many worlds. The land of the dead, the forested Forgelands where God had people making mountains—Death gets around. There are also more tools to play with. He can’t ride ten feet on his green fire-spewing pale horse without stumbling on a pile of new armor and scythes.

It isn’t cooler though. It’s bigger, it feels better to play, but not much is at stake in Darksiders II and as one drab dungeon gives way to another, the game reveals itself to be pretty, well made, and empty.

The first problem is Death himself. Decaying WWE wrestler looks and cheesy mask aside, Death is lithe and a joy to steer around. Jumping up platforms, running across walls, and slinging around twin scythes is lusciously kinetic. Even swimming, hard to pull off in action games, feels effortless. How you beef him up through experience depends on taste. There are two evolving paths for abilities, one based around physical moves and another around undead-summoning spells. Even as you load up on new skills and gear, Death feels easy to use throughout and that’s no bad thing. Personality, however, isn’t his strong suit.

With the exception of the occasional wry quip, Death is a personality-less cypher. Darksiders II is inappropriately named—It’s not a sequel but a series of parallel events wherein Death is working to clear War’s name. For people who’ve played the original, there’s no tension; we already know War is just fine. For neophytes though, Death doesn’t come of as driven. He wants to help his brother, but we never hear why or see any passion from him. War went out looking for the people that wronged him, but Death is usually just chasing Maguffins for characters he meets along the way. Hints that he’s haunted by his role aren’t explored in detail. Death’s history is the subject of a few thin monologues. He’s a reactor, not a catalyst, impotent rather than authoritative.

Darksiders II’s worlds mirror Death in most ways—They’re architecturally sound but soulless. Developer Vigil said that it abandoned Earth as a setting because it wanted to unshackle its creativity. Instead of one dense world that’s engagingly twisted and familiar, Vigil made four worlds that feel like generic fantasy templates. Does every single wall in the land of the dead need five skulls on it? The dungeons Death saunters between are full of brain-massaging puzzles, but lack character. Figuring out how to trigger a switch with a well-thrown bomb is gratifying in the short term, but without a coherent sense of history or place, it’s no more revelatory than assembling a jigsaw puzzle.

Vigil might have been better off making Darksiders II its own game rather than a sequel. They’re infrequent but the game does have moments that hint at a world full of characters worth exploring. Near the beginning of the game, you stumble on an old golem made out of rocks and plants. Who his master was, why he had to wait in this spot; his background is lost because he’s been there so long, but he does know that he’s hungry. His diet consists of rare glowing rocks. This is just set up for having you gather some of the game’s hundreds of optional doodads, but the real reward is getting to know the countryside Death’s exploring a little more. Darksiders II doesn’t expand on these rare opportunities. None of these quests add to the universe established in the first game, and Death doesn’t change because of them.

Corruption, the tainted remains of another of Death’s brothers, is a fitting villain for the game. He’s an all-consuming void eating away at the worlds Death visits on his aimless journey. Darksiders II is bigger, and in many superficial ways better, than Darksiders, but it doesn’t do the same job as well. War’s adventure was about something, silly as it was. Death’s adventure is just the barest excuse to run and jump on stuff while swinging a scythe. For some that might be enough, but like the difference between a job and a career, Darksiders II could have been far more fulfilling.