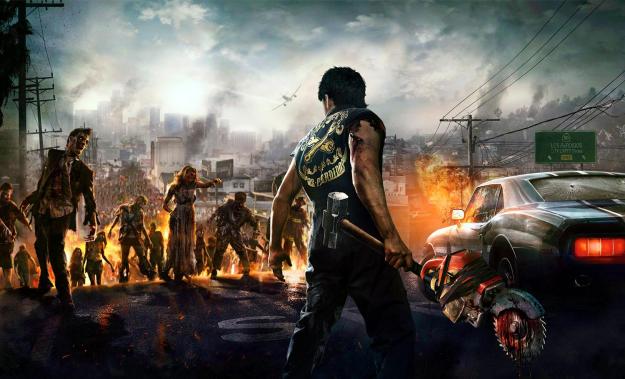 Microsoft let loose with a big surprise at its E3 2013 press conference: Capcom Vancouver’s freshly announced Dead Rising 3 is an Xbox One exclusive. The debut revealed a grittier take on the once-cartoony series, with many of the core ideas carried into a world that feels more desperate and more dangerous. We spent some time staring at a different section of the game behind closed doors at Microsoft’s show booth, and while the stylistic changes might not please every fan, it quickly becomes clear that the soul of Dead Rising is still very much intact.

New city, new survivor. The new protagonist in Dead Rising 3 is Nick Ramos, a pre-outbreak mechanic who must bludgeon, carve, and shoot his way through the city of Los Perdidos – “the lost,” translated from Spanish – for reasons that are currently unclear. The city is still filled with all manner of quests, sidequests, and other distractions to keep Nick busy, though Capcom confirms that time is not the factor that it was in previous games.

Nightmarish surroundings. Those looking for the “pure” Dead Rising experience will have the option of tackling Nightmare Mode, which instates the familiar time constraints and limits saving to inside the game’s bathrooms. There’s also a co-op component to the game – both online and “couch” – but the details of who the second character is, and how co-op actually works, are being left for future reveals.

A weaponized world. Just like previous Dead Rising games, just about anything you can pick up is usable as a weapon. The expected assortment of lethal and non-lethal items is scattered around. You’ll still be able to combine what you find into even deadlier weapons, though crafting benches are gone. Now, you can craft on the fly anywhere, as long as you’ve found a blueprint for the combo in question. Here are a few of those seen during our demo: Sledge Saw (sledgehammer + circular saw), Boom Cannon (shotgun + grenade), Mauler (machete + katana), Tactical Handgun (pistol + flashlight), and Flaming Sword (broadsword + motor oil).

Stocking up at safe houses. Safe houses are a new feature of Dead Rising 3‘s world. You’ll see circular markings and arrows painted on various walls that point the way to these relatively secure locations, many of which hide loot and other useful items. These locations also features closets that fill up with outfits you find and the brand-new weapons locker.

Anytime you pick up a new weapon or craft a combo weapon (firearms included), it is added to and can be retrieved from these lockers anytime you visit them. There’s no need to be precious with rare or coveted weapons anymore; simply head to a safe house and grab a new one. We also spotted a paper map of Los Perdidos laid out across a table, suggesting that the game features a way of getting around quicker than on foot; unfortunately, details on that are being saved for a future reveal.

Help from your eye-in-the-sky. Xbox SmartGlass functionality is completely optional in Dead Rising 3, though not using it means you don’t get to enjoy the added gameplay content and bonuses that it offers. The story gimmick for SmartGlass involves a nameless survivor finding his way into an abandoned military facility filled with all manner of deadly toys. He’ll speak to you through your touchscreen device – yes, you will literally hold your phone to your ear – and deal out missions that, once completed, unlock limited-use boosts like the airstrike seen during the E3 press conference. SmartGlass also packs in a live-updating minimap that you can interact with to set waypoints anywhere in the world.

Building a better Nick. Much like Frank West and Chuck Greene before him, Nick Ramos earns Prestige Points (PP) for performing various actions and for dispatching zombies. The difference in Dead Rising 3 is that you’re not locked to a specific upgrade path. You receive an attribute point for each level earned – the cap is still set at 50 – that can then be spent in a number of categories: Life, Inventory, Melee, Ranged, Mechanic, Agility, and Smarts. Hitting milestones in each one unlocks various special abilities.

There’s also a “Combo Categories” section of Nick’s stat sheet that offers more flexibility for piecing together blueprint weapons. It works like this: Every weapon that you find falls into a specific “class” denoted by an icon; things like blades, blunt weapons, firearms, and so forth. Each blueprint requires a specific pairing of weapons, so only a katana and a machete will combine to create a Mauler, for example. However, if you spend an attribute point on unlocking “Blades” in the Combo Categories, you’ll be able to use any bladed weapons to craft yourself a shiny, new Mauler.

Getting lost in Los Perdidos. The city of Los Perdidos is large enough to accommodate the maps of both Dead Rising and Dead Rising 2, with more room to spare. It’s a big, squarish space that is broken into four districts at each of its corners. The entire region is connected by a network of zombie-mobbed highways, making vehicles a big part of the game. Some you’ll find abandoned in various parts of the game world, but more high-end vehicles such as sports cars can be snatched from Nick’s old employer, a chain of car repair shops called Wrench-O-Rama.

The sprawling city seems to host a range of environments, from small-town streets filled with quaint, little shops and the soaring skyscrapers of a proper metropolitan center. Nick can explore below the ground as well as above it, with a variety of service tunnels (and presumably sewers as well) offering alternate routes around the typically horde-filled streets.

Gritty doesn’t always mean grim. The colorful and garish surroundings of previous Dead Rising games is toned down in Dead Rising 3 for a look and feel that skews in a more realistic direction. While this means that the tone of the game feels more serious than it has in the past, there’s still silliness to be found for those who seek it. You can still outfit Nick in a summer dress, for example. Or a mascot’s shark suit.

The shinier look won’t please all fans, but it’s something that the Capcom Vancouver team felt was necessary. The cartoonish look of the series was defined over three games and two standalone DLC adventures, and everyone wanted to change things up. The hope is that players will still be able to make their own zombie apocalypse feel like a wacky place by dressing Nick up and using some of the more outlandish weapons – a discarded Chinese dragon head that we spied would probably look great on a zombie, for example – while appreciating a more realistic and slightly scarier breed of Dead Rising zombie.

There’s no word on release date yet, but Dead Rising 3 is an Xbox One exclusive that seems like a perfect fit for launch. It highlights the technical strengths of the console, makes clever use of Xbox SmartGlass – in truth, the best that we’ve seen so far – and pushes the beloved series forward in new and surprising ways. There’s still plenty more coming about the game’s story and featureset, but this initial look is incredibly promising.