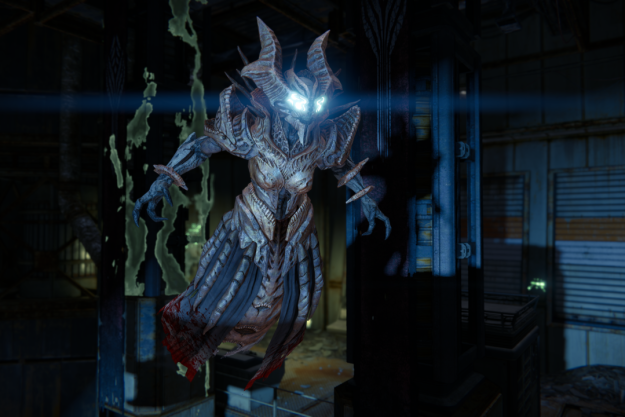 “The Dark Below is all about adding more stuff to Destiny. If you've reached the endgame and you're still enjoying yourself, consider this essential.”

We all spent hours, even days, shooting at a dark hole.

Destiny‘s first great success wasn’t quite a Pyrrhic victory, but it easily could have been. A still-burgeoning community of fans united around the ridiculous proposition of shooting blindly into the now-legendary “Loot Cave” back in September 2014. They did it to fast track their way to better gear, but many found a fun social hang as well. Even though we were just shooting at a dark hole, we were having a blast laughing about it.

Destiny didn’t transform with the Loot Cave, but Bungie’s approach to selling us on the experience did. The “next game from the Halo dev” identity that loomed large throughout development was virtually erased. The Loot Cave turned out to be a formative moment. If anything feels off about The Dark Below, Destiny‘s first paid expansion, it’s the tension between that apparent transformation and the weight of expectations around what it turned the game into.

Fundamentally, The Dark Below is about injecting more stuff into the game.

Fundamentally, The Dark Below exists to inject more stuff into the game. This stuff comes in the form of a new story thread (amounting to roughly four new quests through mostly familiar territory), a cooperative Strike mission (or two, if you’re on PlayStation 4), four Crucible multiplayer maps, and a raid set deep in the bowels of Earth’s moon. Plus a small mountain (more of a hill, really) of gear.

None of Destiny‘s core is changed, for better and for worse. It’s a game that exists for the grind, and the newly added stuff creates more threads to tug on each day. Crota’s Bane rankings expand awkwardly on the already ungainly faction reputation system. Much like Vanguard/Crucible rep, you complete bounties for new quest giver Eris Morn to rank up and unlock resources that help The Dark Below‘s newly added high-level gear reach its full potential.

The problem is that Crota rep only comes from this small handful of three to five daily bounties that Eris offers, presumably as a means of deliberately slowing down each player’s climb through the ranks. Pace is a very important design consideration in progression-driven games like this, and Crota’s Bane highlights the overt barriers that Destiny already places on player freedom. The problem isn’t that the barriers exist, it’s that they’re so plainly shoved in our faces. Crota rep feels more like a regression than a step forward.

It should also be pointed out: The Dark Below, and likely any content that follows it for the foreseeable future (see also: House of Wolves), is built for the endgame. If you haven’t pushed past level 20 and you don’t intend to, there’s not a whole lot here for you in this expansion. Even if you’re a PvP junkie and Crucible represents the totality of your Destiny investment, it’s hard to justify a $20 spend for four new maps.

The more robust offering of PvE content shows flashes of greatness. New story missions all re-visit familiar locations from the main game’s campaign, introducing only a handful of new corridors and rooms that splinter off from known areas. There are some memorable set pieces peppered throughout the new story content, but there’s little reason to come back once you’ve conquered them. Destiny is a reward-motivated game, so revisiting the campaign is only valuable when something in the shallow pool of daily challenges prompts you to.

Of course, that leads to another problem: Destiny isn’t super friendly to those that skip the DLC completely. When a story mission or Strike from The Dark Below pops up as a daily or weekly challenge, anyone that didn’t spend money to unlock more stuff is out of luck. They just need to wait until tomorrow, or next week, to reap their top-tier rewards. That’s not okay. Players that opt out of keeping pace with the add-ons shouldn’t be penalized by losing features they used to have, even temporarily.

With The Dark Below, Destiny is still a brilliantly fun but deeply flawed experience.

It’s a weirdly anti-community way of doing things. Destiny is a massively multiplayer game, and player expectations reflect that. Browse through Reddit and you can see a community space filled with everything from thoughtful feedback to loud, impassioned diatribes. Destiny‘s fans have bought into the idea that Bungie is growing the game like an MMO. But new content needs to be additive in a way that doesn’t break the core experience for those that prefer to skip the add-ons.

For those that do pay to unlock new stuff, it’s probably for one, specific reason: The Crota’s End raid. The six-player, matchmaking-free raid quests, which lock the most powerful loot behind puzzle-imbued action challenges, represent the pinnacle of the Destiny PvE experience. If you want to run-and-gun with the upper echelons of players without relying on the limited time, PvP-only Iron Banner events, raids are your only path forward.

Crota’s End joins Vault of Glass, the raid that shipped with Destiny. As is evidenced in the new story bits as well, Bungie’s got a better flair for theatrics now. From the first plunge down into the depths of the moon to a wonderfully tense moment before the final encounter, where hordes gather around a force field that drops all-too-suddenly-and-ohmygodthatknightisKILLINGUSALL, the manufactured beats in Crota run nicely in parallel with the emergent, player-authored moments that can only come from the large co-op sessions that the raids offer.

The new raid is primarily a combat gauntlet, with a heavy focus on intra-team communication and cooperation. The game-altering platform and stealth sequences that characterized the Vault are replaced more combat-centric puzzles that are easy to solve but require precise teamwork. By design, every player in Crota’s End has to learn to conquer hard challenges individually, and everyone gets to feel like a rockstar at some point. It feels smaller than the Vault, but each encounter features a more intricate series of steps.

It’s just too bad the Crota’s End hard mode, bafflingly held back for a full month after the DLC’s December 9 release (maybe it was all the cheese), doesn’t do more to encourage fresh looks at normal mode’s puzzles. The difficulty spike is largely a product of the hard mode’s recommended level being exactly one higher than the game’s current level cap, which means even top-level players suffer from damage and armor penalties.

Only the final encounter manages to mix things up in a way that encourages creative thinking. And to be fair, it works great. Bringing Crota down on hard mode is a delicious challenge in a way that justifies the inflated enemy stats. It’s a puzzle to be solved, but with hails of rockets and sneaky backstabs. Familiar, but different enough that radical new strategies are required. And you’re sleuthing it all out while hordes of really dangerous creatures try to claw your face off.

Unfortunately, this raid that requires more teamwork than any other section of Destiny than has existed to date is also one of the most technically unstable experiences. It’s most apparent in Crota hard mode, where the margin for error is non-existent. It’s one thing to throw yourself at a challenging encounter for hours, but it’s quite another when your first success is thwarted because Crota inexplicably stood up a second quicker than he normally does. And that’s saying nothing of the unpredictable network performance (read: lag) or mountain of cheats (aka “cheeses”).

Then there’s the loot. Many questions arose following Destiny‘s release about how the game handles loot distribution. The explosive popularity of the Loot Cave demonstrated a clear divide between what players desire (lots of loot drops) versus Bungie’s vision (a hard-earned arsenal). The Dark Below feels like a compromise between the two.

It opens with an easy path to the vanilla game’s level cap that any endgame player can follow with relative ease. Advancement beyond that point to hit the new cap requires a significant grind, a process slowed by the daily/weekly refresh systems that were already in place. When raids only drop loot once per week for each Guardian, and the community as a whole must wait a full month after release for the hard mode — and its exclusive rewards — you can only plow through the new stuff so quickly.

Therein lies the tension between what Destiny became and what fans continue to expect. This is a game that was built as a marathon experience, but it comes from a studio whose work resonates strongly with min/max-ing sprinters. The most committed fans are also the ones who learn very quickly learn that it’s impossible to advance too far, too fast. With The Dark Below, Destiny is still a brilliantly fun but deeply flawed experience; all the new stuff merely makes it bigger than it was before.

Where does that leave you, random Guardian? What’s the worth of an add-on that builds new, admittedly entertaining material on top of an already shaky foundation? It’s an essential add-on, naturally, provided that you’re still committed to the daily grind. Literally essential. There’s virtually no other way to keep pace with the high-level play, and none at all if PvP isn’t your bag.

Which really, in the end, means it’s not so much a question of whether or not you want more stuff added to your game. Rather, you should ask yourself this: Is Destiny a game I still want to play at all?

My answer is yes. But I wonder how many others that still holds true for.

This game was reviewed on a PlayStation 4 using a code provided by Activision.

The best PS5 headsets
The best multiplayer games on Nintendo Switch
The best Nintendo Switch games for 2022
The best upcoming Nintendo Switch games
7 video game characters who deserve a Macy’s Thanksgiving Day Parade balloon
The best Xbox Series X headsets
Save $250 on the Razer Iskur X XL gaming chair for Black Friday
This PS5 controller Black Friday deal drops the price by $20
How to level up weapons fast in Warzone 2.0
10 video games that would make great movies
How to check if your PC meets a game’s system requirements
‘Wordle’ today, November 25: Answer, hints, and help for word of the day (#524)
And just like that, the PS5 is back in stock at Walmart – hurry!