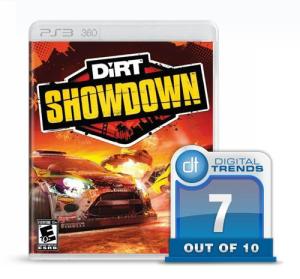 Incorrect assumptions about the distribution model aside, you would be forgiven for thinking DiRT Showdown wasn’t a full game in the same vein as DiRT 3, because it isn’t. It is a collection of games rather than a narrative driven offering or even a campaign based on progression. There is progression of course, but it is not nearly as deep as you might think of a DiRT game having.

To be fair, Codemasters’ DiRT titles–and the Colin McCrae Rally games before that–have never been huge on progression. There are plenty of upgrades, but you generally have a car you can use for quite a while, only occasionally buying a new ride as much out of choice as any real need to improve your car to win races. But still, there has always been the sense that you were progressing through the game, taking on new and increasingly more complex challenges and courses with tougher and tougher AI. Showdown is a very different animal.

Showdown feels very much like a party game. The game modes are quick and have an arcade feel that is ideal for fast-paced battles rather than lengthy and involved races. The controls are similar to those of DiRT 3, but they aren’t as complex. They are easy enough to learn though, but they seem more geared to an audience that is less interested in a racing simulator and more interested in doing things like, say, slamming into a car and trying to knock them off a platform for points.

Completing each game unlocks more game modes. You will eventually begin to repeat games, but there is a lot of variety to try out that makes it all avoid feeling too redundant. There are four categories of games, each with their own sub-category: Racing, Demolition, Hoonigan, and Party.

Racing is straight forward enough and broken into three styles, including a standard race-off, a domination mode where you are awarded points for the best time in sections, and an elimination game with the last racer getting the cut. Each of the four categories has different games, but like with Racing, they all feature the same underlying current.

The Demoliton games are all about slamming into others for points. One mode has you just trying to destroy others, while another has the “it” person trying to survive on coming cars. Hoonigan is a series of trick races similar to the Gymkhana modes of DiRT 3, and Party is a multiplayer-only mode that has three arcade-ish offerings including a capture-the-flag-like mode, speed skirmish, and a keep-away game mode.

The more you play, the more cash you earn to upgrade cars and buy others, but with the exception of the Hoonigan and Party modes, the cars are all fictional, and they are mostly all around the same level after you add a few simple upgrades. Once you upgrade a car a few times, you should be able to stick with that car for a while. There are advantages to using certain types of cars in games like the Demolition modes, where bigger cars are better, but otherwise the car selection is limited. That gives the game a touch of hollowness.

Adding to that is the mini-game feel of the races and challenges. Most of them can be completed in under three minutes. That in itself isn’t a bad thing, but it does add the feeling of Showdown being a light game.

Part of that is a result of the game’s desire to get you to play online. It wants you online, it needs you online. And playing the game online is the best way to approach this title without question. It can’t be understated how much fun it is to slam into another car at full speed, especially when you know there is someone on the other end cursing your name.

The races are fun, but the arcade feel lacks the racing depth that DiRT 3 and its peers offer, and instead makes it feel like something you quickly burn through to get to the next game rather than the point playing this franchise. The Demolition and Party modes are the best options here, and they will keep you entertained for a while.

The graphics are on par with the other DiRT games, but otherwise Showdown just feels like it should be part of a bigger game. Add this on to DiRT 3and you have one of the best racing games ever made. And that brings us back to the fact that this game feels like it should have been downloadable rather than a complete retail offering. If DiRT Showdown had been a downloadable game with a budget price, it would have been among the best digitally distributed games out there. As a full retail game though, it feels lacking.

There just isn’t enough here to really win over a mainstream audience. Fans of the DiRT series are also going to be a little out of sorts here too, as the controls—while similar to previous games—are more arcade like than in the past. That matches the tone of the game, but it is also puts it a bit out of the realm of standard racers and makes the actual races feel like a small part of the package.

The campaign is hollow, and the modes are almost all competitive, meaning you will constantly be fighting the AI when not online. The AI isn’t bad, but it is unfulfilling to beat them over and over without any real reward for progression other than unlocking the same 13 game types you see repeatedly.

Getting the most out of this game means going online to play it, and that is fun. It won’t keep you engaged forever, but if you are already a racing fan, and you are looking for something new online, DiRT Showdown may be a good fit for you.