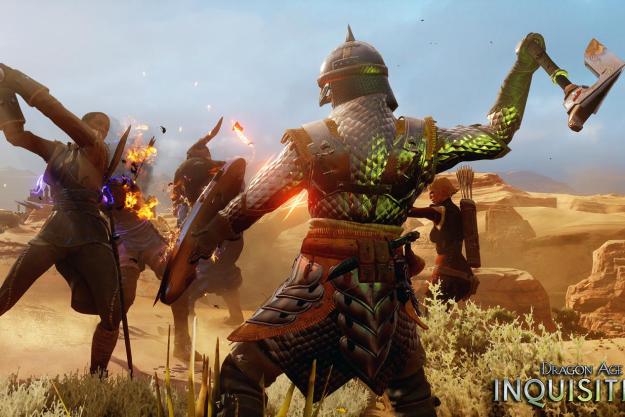 “Dragon Age: Inquisition is an incredible game -- one that’s almost too big for its own good.”

In retrospect, it was never meant to be. Scout Harding is the total package — sweet, cute, independent, and reliable — but as the Inquisition’s lead scout, there wasn’t ever real hope that she’d strike up a romance with her big boss, the Inquisitor. Sure, there was some confused flirting and, at one point, an overt invitation from her to share drinks and conversation at the local tavern. But nothing ever materialized.

To be fair to Scout Harding, it’s not her fault. She’s ultimately bound by the limitations coded into her character, and the narrative wizards at BioWare deemed her a second-string player long before any Inquisitor ever laid eyes on her. In Dragon Age: Inquisition, she’s just one tiny piece of a grand tapestry, perhaps the most complex journey this studio’s ever constructed. But the dangling plot thread that Harding represents says so much about Inquisition‘s simultaneous success and failure.

The dangling plot thread that Harding represents says so much about Inquisition’s simultaneous success and failure.

Dragon Age: Inquisition is BioWare’s largest-ever single-player story, the product of more than four years worth of effort. It’s stunningly massive in scope, a sprawling adventure set in a beautiful world where one person can change everything. You are that one person, an unlikely hero thrown into a leadership role that only ever suits you as well as you allow. In the realm of video game power fantasies, Inquisition is peerless; this is a story that exists to shape itself around your whims, conscious and otherwise.

It all starts with you in chains. There’s been a cataclysmic event: a magical rift that tore across the sky and the disappearance of a religious figure on par with the Pope, vanished into the mists of a magical realm. After finding you at the scene with no apparent memory of what occurred, the military arm of the world’s dominant religion locks you in a cell. It’s a magical mark that saves you, mysteriously burned onto your hand. The mark has the power to close rifts like the one up in the sky and as far as anyone can tell, it’s unique.

There’s simple math at work here, an unlikely-yet-incontrovertible A-to-B progression that quickly establishes your hand-crafted protagonist as the de facto leader of an entire Inquisition. Yours is a trifling power at first, barely an eddy in the tidal forces swaying the competing interests in Dragon Age’s world of Thedas. It’s through your efforts — on the battlefield, at high-society soirees, and in the shadows — that the Inquisition becomes a rallying force for this world. It’s under your banner that the evil is eventually overthrown.

This power play unfolds on multiple levels. On the ground, your heroic world savior — he or she, human, elf, dwarf, or Qunari — goes and does Dragon Age things, same as it ever was. There’s more territory to explore in Thedas than we’ve ever seen before: looming forests and windswept deserts, snow-capped mountains and crumbling ruins. All of it is filled with enemies, and secrets, and tiny slices of life in need of a savior.

Your day-to-day work as an RPG Hero ripples into the Inquisition’s grander goals. You earn loot, XP, and new companions for completing an array of tasks large and small, but that’s only part of it. Traditional role-playing game lures are there, but it’s the grand scheme that matters in Dragon Age: Inquisition. The more evil you snuff out, the more citizens-in-need that you come to the aid of, the more your power base grows.

That, in turn, fuels the game’s macro level of Inquisition management, realized as a series of so-called “Operations” that you wield to expand your influence in various ways. Agents dispatched from your council chamber’s War Table complete assigned tasks against a ticking clock. There’s often a choice tied to each Operation, a process of delegating the activity to one of three advisors — a general, a diplomat, or a spymaster — that in turn determines how the assignment plays out.

In the realm of video game power fantasies, Dragon Age: Inquisition is peerless.

There’s no failure for these Operations; they’re primarily here for narrative color. You do a lot of reading at the War Table, first to learn what a task is and how each advisor would tackle it, then to see the results of your choice. Sometimes there’s a tangible reward, anything from new gear to expanded influence. That’s secondary to the closure, though, a layer of narrative texture that further reinforces the idea that this is your Inquisition.

The War Table is also where you go to propel the story forward, with power that you’ve amassed serving as a sort of high-level currency, used to unlock key quests. It makes a certain amount of sense. The Inquisition lives and dies by its reach, and a growing power base means you can bring more forces to bear against the rising tide of magical threats in the world. A pleasant gameplay loop develops: Explore the world to grow your power, then spend that power at the War Table to move the story forward.

Dragon Age: Inquisition is very good about never letting you forget the position that you hold. Everything feels big and momentous. It’s an illusion, of course, with a no-fail endgame that is impervious to political mishaps. You pass judgment on the accused from your low-rent Iron Throne and decide whether to use military might to help a whining noble or a spy network to weaken his position, but none of it really matters, beyond coloring your experience.

Simultaneously, Inquisition is also very bad at keeping micromanagement at bay. Traditional exploration-and-monster-slaying is enjoyable, but the deluge of equipment and crafting materials that you pick up turns the latter half of the game into a menu-shuffling timesuck. There’s miles and miles of depth here, especially in the crafting system, but it quickly grows tiresome to sort out who gets what equipment between the 10 playable characters.

The micromanagement works much better in multiplayer. It’s a cooperative dungeon crawl for up to four players, with all of the character and equipment progression depth found in the main game. The two modes are completely separate, but the multiplayer has plenty of hooks in its multiple character classes and crafting options. There’s still a lot of time spent in menus, but the micromanagement balances perfectly with the multiplayer mode’s emphasis on raw action.

Dragon Age has never been an experience to rush through, of course. Story is your reward for patience. There’s reams of text to be read and dialogue to be heard. You don’t have to take it all in, but doing so adds flavor and nuance to the world. The player that’s willing to sift through Inquisition‘s encyclopedic Codex isn’t going to be inconvenienced by time served on party micromanagement. At the same time, there’s also no real penalty for driving a straight line through the story beyond missing the subtext.

Dragon Age: Inquisition is BioWare’s strongest effort to date, but the massive scope of the world comes at no small cost.

The real problem with Dragon Age: Inquisition is the story’s frayed edges. There’s so much here, such a convincing world that’s been painted, that the boundaries are all the more obvious when they do crop up. In some cases, the impact is purely functional. Character animations and facial expressions aren’t nearly on par with modern gaming standards. Equipped weapons are magically fused to a character’s back when not in use, with no obvious straps to hold them in place. Bugs and mechanical quirks are constant companions.

More problematic are the barriers that prevent the player from realizing his or her own Dragon Age fantasy. Like poor Scout Harding, the victim of an apparently unfinished romantic subplot. You can flirt with her, even nurture the kernel of a relationship. She’ll mention that she hangs in the tavern at night and maybe you’ll see her there. But there’s no follow-through. Scout Harding never sets foot inside the tavern; she stands like a statue just outside, the victim of a limited and seemingly incomplete conversation tree.

That’s a real problem. A game that places as much emphasis on narrative investment as Dragon Age: Inquisition does suffers mightily beneath the burden of undercooked plot points like Harding. This is a character you can slowly build a relationship with over the course of 50-plus hours, but there’s no delivery, no closure. If she spurned you, that would be one thing. But that’s not it. Like so many of the game’s patchable mechanical issues, she’s just unfinished.

Dragon Age: Inquisition is BioWare’s strongest effort to date, but the massive scope of the world comes at no small cost. The boundaries the game necessarily places on your dungeons-and-dragons-fueled power fantasy are clearer than ever once you spot them. There’s an unseen script that, if you manage to stick to it, crafts an unassailable illusion. But deviate too much, and you run smack into a narrative wall that certain games like Dragon Age: Inquisition don’t let you past.

Scout Harding is just an example, one of the many invisible barriers your fantasy power trip could potentially crash against. It’s unfortunate, but that’s the fairly paid material cost of Dragon Age: Inquisition‘s grand ambitions.

This game was reviewed on an Xbox One using a disc provided by Electronic Arts.

Dragon’s Dogma 2 is in development at Capcom

The best Square Enix games of all time