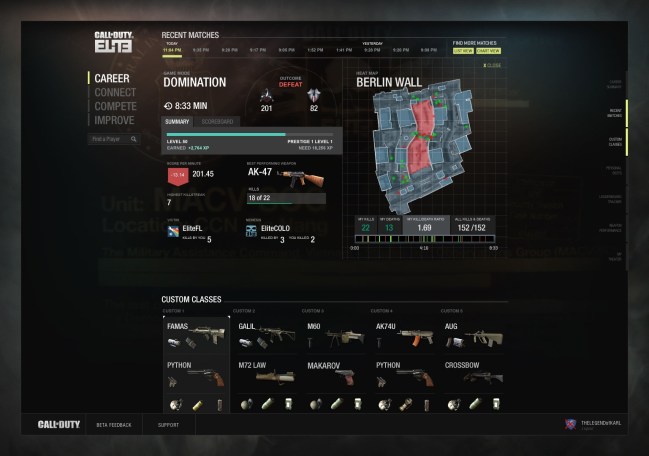 Few things can rally the gamer community faster than threatening them with new fees for existing products. It is like threatening to steal a baby bear from an angry, hungry mother. So when Activision announced that there would be a subscriptions based Call of Duty service, you could almost hear the collective groans of the CoD community.

Activision CEO Bobby Kotic has often mentioned the possibility of milking the franchise for all its worth, and the talk of a subscription model for the game, where you would need to pay Activision a monthly fee, has been discussed several times. Those stories have been refuted repeatedly, and promises of no charges for CoD have been claimed many times, but it would not be the first time in the history of the world that promises had been broken.

So when Activision announced Call of Duty Elite, a service that would cost users real money, it did not go over well. Thankfully the reports of the death of a free CoD have been greatly exaggerated. Call of Duty Elite is a subscription service, but it is one that is entirely optional. It is not required to play Call of Duty and it may even be worth the monthly fee for fans of the series. Besides, there is a free version of it anyway, so it is ok to relax CoD fans.

The early emphasis on CoD Elite has been on the stat tracking, and that is a big part of it, but only one feature. Basically, if the Olympic committee ever decided to make Call of Duty an event, Elite is the program you would use to train.

Elite is a service designed with two functions in mind: The first is to make you a better player, the second is to build the social side of the game.

Elite is currently compatible with Black Ops, and it will carry over and be built in with Modern Warfare 3. Every game you play, every stat you accumulate will be available through Elite, as will every other player you have played with and against. Elite offers stat tracking on steroids, and the point isn’t just to give you something to look it, it is to help you improve. Once you play a map, that map will be available to review in Elite. It will show you where you succeeded and where you failed, and give you tips to improve. If you were killed several times in the same area by people with close quarter weapons, it will advise you to stop using long range weapons, for example. It will also show you the people that you killed, as well as those that killed you. You can then see what loadout they used to beat you, as well as every loadout that the player uses, plus their results with each set up.

You can also compare stats for every game type in CoD with other players, and pick certain people to be part of your own personal leaderboard. If one player was impressing you, you can add him to your list and check to see what he is playing with, where he is playing and what his play style is.

You can also look at weapons and perks, and Elite will link each to a YouTube video that shows you the optimal way to use them. If you want to see the best way to utilize the Famas, the video will show you how it fires and how to make the best out of it. There will also be tips on attachments and the way to make it the most effective for your style of play.

Basically, every stat you could think of will be accessible for you and your friends/rivals. If there is any practical reason to know it, Elite will have tracked and displayed it.

But the stats are just one aspect of the Elite service, the other is the social side.

Come for the stats, stay for the groups

Blakc Ops can be a tough game to meet people that you enjoy playing with. There is an aggressive competitive element that forces you to go out of your way to build connections—either that or you just have to get lucky and wind up playing with people that you like and who are willing to communicate with strangers. Elite makes it much easier to find like-minded people.

One feature is the groups, which exist to pair people with others with similar interests, even if it has nothing to do with gaming. If you want to find fans of the Kansas Jayhawks, you can search for that and join. If there isn’t a group, you can create one. From there you can post topics about anything you want, and meet people that way. You can join dozens of groups, and the common thread of the group can be anything from being in the same area to a love of toasters, or something equally specific, it is just a matter of people wanting it.

There will also be clans that you can form through Elite, or you can request to join existing ones. From there you can set up matches with rival clans, and send messages to each member. The clan side was still under wraps, but Activision promised to make it a unique experience, and joining a clan may even have other implications—one example was that you may be able to choose a clan color and all members will then feature that color on their weapons.

The theater mode will also be easier to access through the groups and clans, and the top clips from the game that people are sharing can be watched through the Elite program.

Kill someone with a flamethrower, win an iPad

There will also be a series of competitions and challenges offered daily. Sometimes it will be something specific, like the people with the most kills with a flamethrower attachment or the most grenade kills win. Other times it might be more general and be a matter of the most points or kills in a time frame. To join you simply need to accept the competition and your stats will be tracked. The winners will then receive prizes that could range from CoD points to things like iPads. There will also be the occasional sponsored prize for something major, like cash.

All of these features will be free for anyone to use. The Elite program will soon be available for Black Ops, and it will be built in to Modern Warfare 3. But there will be a premium option as well, which will involve a subscription fee.

The premium side will not be a requirement to play Call of Duty, or to access the standard Elite options. Much of the premium content is still under wraps, but one example given was the inclusion of more daily prizes, and big prizes at that. The list of prizes isn’t close to being complete, but they should be fairly substantial.

The issue of how much the subscription fee is also hasn’t been revealed, but the folks at Activision claim that as part of the fee, you will receive all the map packs. A Call of Duty Map pack typically costs $15 a pop, and there have been two released for the last few games, so by that logic the total cost will be under $30 for a year. That is just a guess though.

We’ll have to wait and see what the final price is, but Call of Duty Elite is something that can be enjoyed for free, and the people that choose to pay are the same people that would end up paying the same amount of money to Activision anyway.

For now it is a bit of an experiment for the ultra hardcore fans. It could open the door to further fees for services in the future, but as it stands the Elite will not restrict anything, only add to the Call of Duty experience. And with 7 million people playing Black Ops per day, that’s not a bad thing.