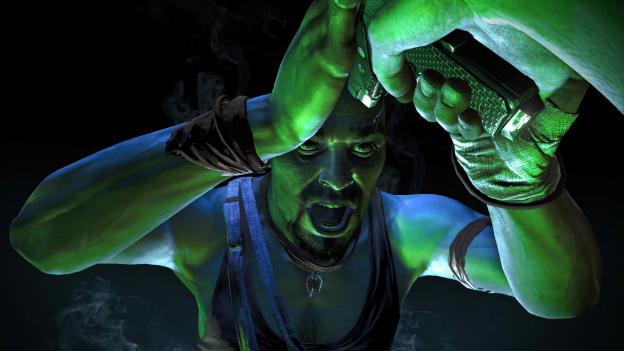 One of the best looking (and most disturbing) games to be featured at this year’s E3 is without question Ubisoft’s Far Cry 3. From the first glimpse we had of it last year when the man known as Vaas tied the protagonist to a cement block and threw him off a waterfall, we knew this game was going to push the envelope. The focus on mature themes including sex and drugs just further cemented that.

The game has been one of the most publicized here at E3. It was featured at Ubisoft’s press conference (naturally), and also made an appearance at Sony, discussing a newly announced four-player co-op mode, separate from the main campaign. Far Cry 3 has gained a lot of attention, and we got the chance to go hands on with it to try it out.

In Far Cry Instincts, you were more than human, sporting some impressive animalistic powers that increased your speed and strength, which gave you an additional attacks to go with the standard gunplay. That particular feature won’t make it into Far Cry 3, and the game will return more towards it realistic(ish) roots, but there will still be an augmentation to the way you move and play, thanks to a mix of specially made drugs.

In the demo we saw at Ubisoft’s press conference and later got to play, the clip begins with a woman later revealed to be the sister of your new-found nemesis, Vaas. Walking around topless (which will probably have people talking), she then gives you a bizarre motivational speech and shows you your new ceremonial tattoos. You then turn to a waiting horde of islanders that bear some resemblance to Samoan warriors, and give them a rousing speech, claiming that they will find Vaas and take the islands back.

The scene takes place roughly half way through the game, and stands in contrast to what we know of the protagonist, Jason Brody. Jason is an average guy, with no special combat training to speak of. He and his friends stumbled upon the chain of islands that Vaas controls, and Jason is left for dead while his friends are taken captive.

Here, Jason has changed. According to devs from Ubisoft, the island is a crazy place, and it will drive Jason a bit crazy as a result. There will also be several drugs that will alter Jason mentally and physically, giving him an edge, and giving players added gameplay benefits.

The playable demo began with Jason standing on a cliff, looking over the horizon. The world before him is gorgeous and lush, with lighting and water effects that border on jaw dropping.

The objective marker was a short swim away, but scanning the area showed a string of islands that are all explorable. According to Ubisoft there will be dozens of islands to traverse. It is unclear whether or not there will be any benefit to taking your time to roam around, but there is an experience system at play, so it seems probable that there will be a good excuse to stray off the beaten path.

In the demo, Jason was already powered up, but the experience will be instrumental in adding new attacks, especially melee-based moves. Once Jason reached the island, the possibility of stringing melee attacks together became possible as enemies came into view.

If you grab one enemy, as you are in the animation to finish him off, you can hit another button to automatically move to the next attacker. Which button that is depends on whether or not you have unlocked that move, and what you want to do. If you wish to stab one enemy then move onto the other and do the same to him for a series of quiet kills, you can. If you want to slash the first baddie and grab one of his grenades, then throw it at the coming hordes all in one movement, you have that option. If you want to kill one and grab his gun to turn on another, you can. The melee system will be robust and be a major feature of the game.

This section of the demo featured a linear path leading to a compound that Vaas was at. As I crept up the path, I was able to silently take out a guard using one of the game’s primary weapons, a bow and arrow, which requires you to hold down the trigger button to pull it taught.

After playing Robin Hood, I then took out an enemy with a brutal melee attack, and then another using a shotgun the first dropped. Heading into the compound, Vaas sprang a trap, which led to a firefight. Cover is unreliable and can be destroyed, so constantly moving is key. Takedowns can also be accomplished by jumping on enemies, which I was able to do following a running jump off the roof.

The gameplay feels familiar, and it is uses standard FPS controls. There is a weapons wheel that allows you to pause the game and select a new weapon, grenades, and all the standard things you would expect from a title in this genre. The emphasis seems to be on speed, which leads to some frantic, intense, and utterly mad battles across an insane world dominated and molded by a psychopath you will badly want to murder in the most incredibly awful way to even the score.

The environment can also be used. Scattered fuel tanks can be destroyed to cause major explosions, and mounted machine guns can be used to thin enemy ranks. You can also shoot cage doors open and release angry tigers upon the surprised enemies, but you will then need to take care of them when they turn on you.

Next came a more powerful armored foe with a flame thrower. A direct assault could do the job, but not easily, so instead I shot the tanks on his back and waited for the explosion. Heading into Vaas’ warehouse, the story took over with a cut scene. Vaas attacked Jason, causing a hallucination that led to a series of bizarre visions, concluding with a moment that has you about to finish Vaas off — or so it appeared at first. The drugs were upon Jason, and not all was as it seemed.

Far Cry 3 will also feature a multiplayer, as well as the four-player co-op missions mentioned earlier, but neither were playable or on display.

Fans of the FPS genre looking for the next big title to tide them over should have Far Cry 3 in their radar. The demo was brief, but the controls were smooth and responsive and the experience-based takedown system definitely has potential. The use of drugs to augment your moves also has a lot of appeal, but we’ll have to wait to see how it works out.