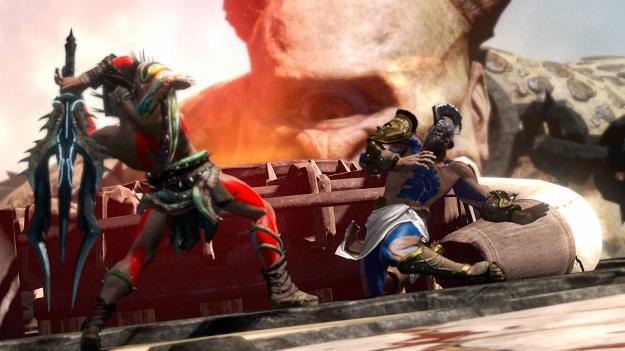 After getting the chance to see God of War: Ascension’s new multiplayer mode back in April, the most common question I was asked was if it played like God of War, or if it was just another hack-n-slash that used the God of War brand. It was a legitimate question, and one that couldn’t be answered by simply watching a video of it.

This week at E3, I had the chance to go live with the game and try it out for myself.

The level on display was the same that was shown at the unveiling event. It pitted two teams, still tentatively known as the Spartans and the Trojans, in a domination style game of four on four. The map contained three points that teams could capture in order to gain points, and at the back of the map was a giant Cyclops that occasionally slammed its fist on the map to crush the lead footed. It was a bit unique, but it was also very familiar to anyone that plays competitive multiplayer.

The game began with a loadout screen that was locked for the demo, but it will eventually allow players to upgrade their weapons, armor, and also choose the type of magical attack they would like. When the game is ready to ship you will also be able to align yourself with a god of your choice, which will change the magic you can use. For now though it was preselected. Beyond the selection of weapon (axe or sword) and armors (there is a slight stat difference), the choices were locked.

With a sword in hand, the game began. Working as a team to take the domination points was essential, although it was possible for one person to defend the area thanks to a series of traps players can activate. When a lever is pulled and the circle button is hit, spikes will spring from the ground around the domination point and kill anyone around, friend or foe. It was a hoot.

But while activating traps is fun way to seriously annoy the opposing team, it is kills and domination points that are needed to win. So on to the combat I went.

It is easy to get lulled into the sense that Ascension is a button masher. You can get away with that often enough in the GoW campaigns, so it feels like something you should be able to do. It will get you killed.

Everyone I know thinks they are amazing at God of War, and that is part of the brilliance of the series. But those that played the games on the Titan difficulty know there is a trick to surviving powerful opponents. It’s called blocking.

The combat is very much God of War, but you will need to be smart to win. The lack Kratos’ blades mean you no longer have the reach advantage, so instead you will have to time your moves and wait for your opening. If you begin to take a beating, you will have a single health to use (although it wasn’t clear if this was a class specific item, or how this will work in the final version), or you can run away—sorry, make a strategic withdrawal–and look for health reservoirs.

While running for your life, you can also collect blue mana to unleash your special magic attack. Certain areas will also feature special weapons like a giant hammer that you can pick up and use to smack down enemies. When you get the upper hand, you can then pull off a finishing move to begin an animation and end them. Following a death there is a short cool down of a few seconds before respawn, so you may see them coming after you soon enough, as the map isn’t that big. Speaking of respawns, there is a simple and brilliant idea at work that will prevent spawn killing. You begin the match on a raised platform, and need to zip line down into the action. It is a small thing, but after dying dozens of times seconds after spawning in other competitive multiplayers, it is very much appreciated.

With my team losing horribly, I did what I could to capture domination points, and even managed to rack up several kills in a row by using the traps and the ancient art of blocking, but it wasn’t nearly enough. Then Zeus stepped in. The location I chose to defend proved to be fortuitous, and the game took a moment to notify the players that the Spear of Olympus was in play.

The Spear is essentially a nuke. It will fall near the Cyclops, and assuming you aren’t murdered while trying to grab it—it takes a few vulnerable seconds to acquire it—you can then turn it on the monster. With a few quick cinematic strokes, the Cyclops’ face was cut in half, and my team, which I then saw was 9 seconds away from losing badly, became the victors. I may have done a little dance.

Afterwards I was asked by a colleague whether or not the game was something I would play more than a few times, and the answer is yes. It will be nice to see the other online modes still to be announced, and the way the experience system works still needs to be defined a bit, but the fundamental gameplay is God of War.

If you enjoy the other GoW games and think the gameplay in them is exceptionally well polished, and if you are growing tired of the flood of competitive shooters on the market, then God of War: Ascension’s multiplayer may be the answer to your prayers. Just remember to block.

How to pre-order God of War Ragnarok: retailers, editions, and bonuses

How long is God of War?