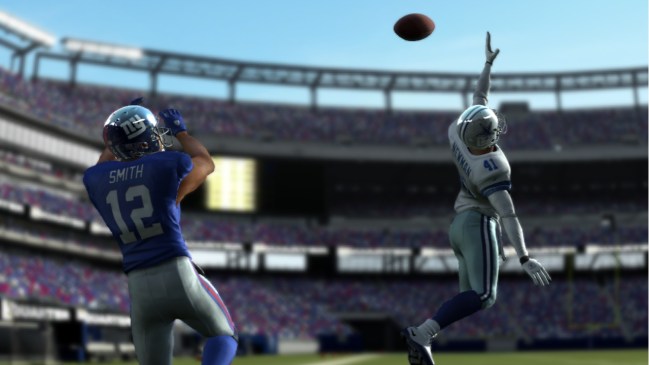 For at least the next few years if you wanted to play a football video game as your favorite NFL team, your options are limited to EA’s Madden games, and only Madden.  But with a potential work stoppage coming soon, EA has found itself in the unenviable position of being stuck with a hundred billion dollar fee for an adaptation of a product that may not exist next year (at least not in the form that we know it). But following new negotiations between EA and the NFL, a new deal has been put into place which will extend that exclusivity through 2013, and reduce the payments that EA owes the NFL next season due to a potential player strike or, more likely a lockout.

According to a report from sportsbusinessdaily.com, the NFL has agreed to add stipulations into the contract in the event of a work stoppage, which could affect the 2011 season and leave Madden 12 in the odd position of having a title for a game that was either not being played, or being played with replacement players. No specifics were released on how much relief EA will be granted, but the original deal has been restructured, and the publisher was also granted the NFL exclusivity for an extra year, and will run through 2013.

The exclusivity deal has existed between the two companies since 2005, and was then renegotiated in 2008 as a five-year deal. It is now said to be worth well into nine figures in guarantees and royalties for the NFL. Behind the licensing agreements with TV, the deal with EA marks the most profitable licensing agreement the NFL currently has. Under the current contract, EA has the license to use all NFL teams names, logos and colors.

EA also has a second contract between itself and the NFL Players Association that is reportedly worth between $30 and $40 million to the Association–which EA is seeking potential relief from if the season is affected as well. The current deal allows the Madden franchise to use the names and likenesses of the players, as well as offering gamers the ability to update rosters online. Negotiations between the two groups are said to be ongoing, and the current deal between the two runs through 2012.

The annual Madden titles, which release in August, typically sell around 5 million copies each year. If the NFL season is affected, EA would likely take a major hit and be forced to drastically alter its promotions for the game, not to  mention the loss of interest from fans. The deadline for the NFL and the Players Association to reach an agreement is March 4.

The best EA games of all time