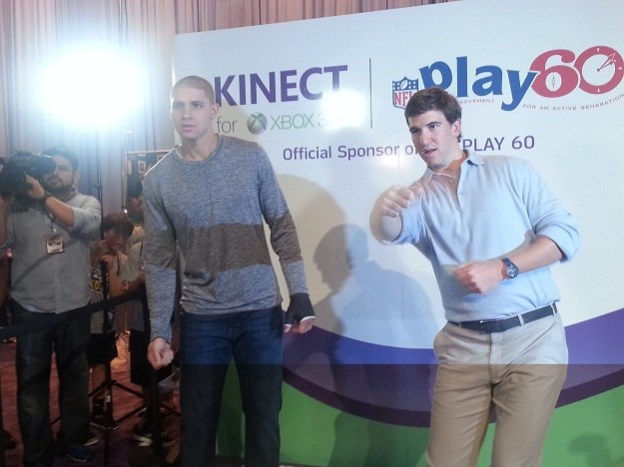 New York Giants quarterback Eli Manning is at home in New Orleans, literally. He grew up in the Crescent City, where his parents still live, and he returned to his home city as the 49ers and Ravens prepare for this Sunday’s game. Manning, a two time Super Bowl MVP himself, has been making the rounds during Super Bowl week, appearing in support of the NFL initiative NFL Play 60, a campaign designed to encourage kids to be active for at least 60 minutes each day.

To that end, the NFL has teamed up with Microsoft and the Kinect. While it isn’t quite as demanding as two-a-days or tire runs, the Kinect is a tool that Play 60 is heavily leaning on in order to get kids more active, especially kids that are more interested in gaming than athletics. In the wake of the negativity being heaped on the gaming industry due to the role of violent media in our society, it’s important to remember that gaming has plenty of benefits as well. And not just through obvious means like the activity the Kinect demands, but more subtle benefits like improved hand-eye-coordination.

Manning took some time to play Kinect for Xbox 360 at the NFL Experience with New Orleans Saints tight end Jimmy Graham. The two-time Super Bowl champ talks about his own gaming background and explains why older brother Peyton can’t be trusted with video games in this exclusive interview.

What are your thoughts on gaming peripherals like the Kinect getting kids off the sofa and active with video games?

I think it’s great. This country has a problem with kids now such as being obese and being overweight. If a kid’s going to be at home playing video games, at least they can be active. They can be moving around. They can be up on their feet. They can be doing track and running around and moving around somewhat. Especially now that winter is getting colder, it’s getting dark earlier, rainy days and snow, they can’t be outside playing. If they’re going to be inside at least it’s something they can have fun with and they can be active. It’s great technology. It can be helpful for youth and their health.

I played Madden and did a little bowling. I’m about to try out some track and field. I’m watching somebody play a little beach volleyball right now. It looks pretty fun. My real action sport is playing football, but I think for kids, as video games are so popular now, they’re so high tech and I see why. Kids can be active and moving around. Kids are going to love to do that.

What are your thoughts about how far this game technology has come from when you were a kid?

It’s come a long way since Tecmo Bowl, when I was playing. All the video games now with Kinect, including Madden, your body is the remote control. It’s pretty amazing. Back then you could move up, down, left, right and you had two buttons to hit. Now, you can do everything. You can kick, use your own hands. It is pretty amazing and I think it’s great. It’s not only fun, more active, and entertaining, but also getting some activity out of it. Moving around instead of sitting on the couch is really great.

You’re here in New Orleans in support of the Kinect, but you are obviously closely associated with football and Madden. What do you feel Kinect adds to Madden NFL 13?

I think it’s great. I’ve gotten to play the football, and you’re running around, you’re moving, you have to simulate the running, the throwing, throwing on time, you know that kind of stuff. This creates a whole new dimension to the video game and I think kids will just really enjoy being that more involved in the game, rather than just being able to hit a button. They’re using their own body to control the action.

How does Kinect fit into the NFL 60 movement that you’re involved with?

The whole objective of NFL 60 is to try to get kids getting 60 minutes of activity every day. With Kinect they can help kids achieve that and they have the 60 million minute challenge. We’re trying to get a million kids to get that 60 minutes of activity every day. That’s a great challenge for our kids all around the nation. It’s a great way for them to continue to get exercise.

If they’re going to be outside, that’s wonderful. But they’re inside, and it’s at night and it’s raining or it’s just cold all around the country right now, it’s hard to get outside for 60 minutes. If you can be inside and doing a track and field competition with your parents or with your buddy or with your brother or sister, I think that’s wonderful that kids have that option.

What role do you see Kinect playing in New Orleans here at the Super Bowl?

I think it will be exciting. It will be a lot of fun. I’m at the NFL Experience right now and they have a booth here. They have four or five stations where you can play a game. They have Kinect on Canal Street, where people will be going in there and be able to get with their buddy and play a game of beach volleyball or go bowling a little bit. They can play a quick game and be on their way. It will be a great way to get to learn about Kinect and get to see it in action.

Hopefully parents see that this would be good for their children and make sure they’re active. I know a lot of kids are hooked on video games and love playing them. I understand why. Obviously, the parents can say, “Hey, if my kid’s in there playing video games, at least now he can be moving around and up and down.” It’s something parents can probably compete a little bit easier with their kid just because they’re playing a little bowling or beach volleyball. Sometimes as a parent they see the controller and they’re like, “Oh, there’s too many options.” But my parents and grandparents can be up playing with their kids, their grandkids and be competitive and have fun with them.

Speaking of competition, was there a lot of competiveness between you and Peyton when it came to video games growing up?

Who was the better gamer?

That’s tough to say. I think he cheated. Peyton, he was kind of looking over to see what play I was running. If you guess the same play you had no chance of having success, but he was looking at my controller. He was five years older than me, taking advantage of a little kid, always guessing my play.

Do you play any video games for fun these days?

During the football season there are obviously practices and preparation and at night I’m usually studying film to get ready for a game. So there’s not a whole lot of free time to get to video games. But I’m sure as my daughter – she’s two right now – and as she gets older I know she’ll be into them.

How popular are video games among NFL players?

I hear about guys playing certain games, and I think they are fairly popular for guys, so you know I think for a quarterback it’s hard to kind of manage getting plays that week, studying all your film and having time to play a videogame would be tough, but I know for other guys I think guys are into it.

Do you guys keep track at all when they come out with a new Madden and what your player ratings are in there?

I do not. I’m sure some guys do, but it’s not going to affect me or something that I’m going to be looking into, no.

How to raise your Faith in Cult of the Lamb