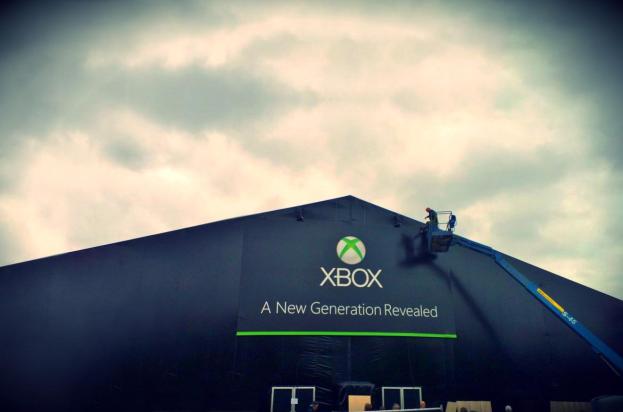 On May 21, 2013, Microsoft will mark a new milestone in its history books. After entering into the video game console market as an upstart back in 2001, the Windows developer pushed and shoved its way to the top of the pile. Microsoft managed to move more than 76 million Xbox 360s into consumers’ hands since kicking off this generation in 2005, and its current-gen console continues to maintain its dominance even today in the North American market.

A new era begins tomorrow with the reveal of the next-gen Xbox, a machine that we don’t even have a proper name for yet. With Sony’s competing PlayStation 4 having been in a position to grab headlines for months following its February 2013 reveal, and this year’s E3 only weeks away, the onus is on Microsoft now to seize back some of the attention. With about 24 hours to go before the Big Reveal, today offers a good opportunity to look back and separate fact from rumor, with the goal of giving you all a better sense of what to expect from tomorrow.

What we know: Precious little

Microsoft will reveal its next-generation Xbox console on May 21, 2013 at 10am PT. You’ll be able to watch a livestream from Xbox.com or via Xbox Live on your console. Cable subscribers can watch it as well, by tuning in to Spike TV at the designated time.

That’s all. We have plenty of rumor and business moves that offer speculative springboards, but the only actual fact we have about the console is its May 21 reveal. Anything you’ve heard about always-on Internet requirements or original Xbox Live programming is worth considering – and we’ll do just that in the next sections – but as far as concrete truths go, this is all that’s confirmed.

There’s a lot of noise out there concerning the next Xbox. Some of revelations are in direct conflict with others: The rumor of the console requiring always-on Internet in order to function, for example. This particular feature continues to be a flashpoint in the next-gen conversation. Rumors relating to both Microsoft’s and Sony’s upcoming consoles suggested at different times that the hardware would require an active Internet connection, but Sony confirmed that this won’t be the case at its PlayStation 4 reveal (scroll down to the bottom of the linked post for that confirmation).

There’s been no official word from Microsoft one way or another on this point. The most recent hint came in late-March, when an early look at the software development kit (SDK) for Durango – the next-gen console’s internal codename – suggested that always-on Internet was, in fact, a requirement. The info leak also indicated that all games would need to be installed on the console’s hard drive in order to run. Even if this information is accurate, bear in mind that it’s coming from a pre-release SDK. There’s no telling how Microsoft’s security constraints might change once the finished product is in stores.

Word of the alleged always-on Internet requirement triggered an angry backlash in Microsoft’s online community, with gamers incensed over the fact that their ability to play games that they’ll be purchasing might be limited by something as intermittently reliable (for some) as an Internet connection. The outburst prompted Microsoft Studios creative director Adam Orth to respond on Twitter in an unprofessional manner, suggesting that angry parties should simply “deal with it.” Orth reportedly resigned from his position days later while Microsoft issued a public apology.

Many took the Orth outburst and subsequent resignation as a sign that rumors of an always-on requirement were, in fact, legitimate. That’s not the end of it though. Earlier this month, an allegedly leaked internal memo from Microsoft said pretty much the exact opposite: always-on Internet is not a requirement. The memo stated that certain console features, including ” playing a Blu-ray disc, watching live TV, and yes playing a single player game,” wouldn’t necessarily require an active Internet connection. The memo also indirectly confirms Blu-ray support and some degree of cable TV integration, provided that it’s accurate.

What we’ve heard: The console’s name

The name of the next-gen Xbox also continues to be the subject of some debate. The name “Xbox 720” has been a common sight on the Internet since the first rumblings of next-gen hardware sprung up, but it’s little more than clever shorthand that the Internet came up with (360 + 360 = 720). There’s never been any suggestion from Microsoft – leaked or otherwise – that this is the console’s name; and, in fact, it seems likely that it won’t be.

One rumor that extends all the way back to November 2012 suggests that the new console will simply be called “Xbox,” much like Microsoft’s first-generation model. That detail came from a magazine’s rumor round-up, citing industry sources; the same rumor also noted that the console supports Blu-ray discs. More recent revelations suggest that Xbox Fusion is the name, based on the fact that XboxFusion.com – a domain that Microsoft purchased back in 2004 – now redirects to Xbox.com, after having been parked for multiple years. Microsoft also owns a number of other potentially next-gen domains, including XboxNext.com and XboxGold.com, but none of the others redirect to the Xbox brand’s main website.

The other rumor worth talking about relates to Kinect, Microsoft’s motion-sensing camera that was introduced as an Xbox 360 peripheral roughly midway through the current hardware generation. There is little doubt that the Kinect tech will receive a v2.0 refresh in the next-generation. Multiple reports over the past year indicate that the revised peripheral will either be packed with the console or integrated directly into the hardware. A rumor from February 2013 suggests that the improved Kinect will have an expanded field of view and significantly improved latency, which means better movement detection for the end-user.

Bear in mind, these aren’t the only rumors. There’s been talk of a changed gamepad, something that features a degree of touch-based support. Whether that means a proper touchscreen, a la the Wii U GamePad, or merely a touch-sensitive surface similar to Sony’s DualShock 4, remains to be seen. It’s possible as well that the rumor is completely false, what with Microsoft’s SmartGlass functionality existing largely to offer second-screen support on touchscreen devices such as tablets and smartphones. There’s also this continuing talk of IllumiRoom, a feature that projects additive content onto the walls around whatever monitor your console is connected to. There’s been discussion from Microsoft relating to how this could work on a next-gen console, but nothing to indicate that it’s a feature of the hardware debuting on May 21.

What we expect: Cloud gaming

Here’s where things get a little more exciting. We’ve considered what we know (which is to say, very little) and we’ve looked at the unconfirmed reports. Now we turn our attention to more concrete evidence, information that doesn’t necessarily relate directly to Microsoft’s next-gen console, but probably will.

First up, Agawi. The company whose name is an acronym for the phrase “Any game. Anywhere. Instantly.” has partnered with Microsoft to bring cloud gaming functionality to Windows 8. Microsoft general manager Brian Hall indirectly confirmed in August 2012 that “the next Xbox” is a Windows 8 platform. With Sony aiming to leverage its 2012 acquisition of Gaikai for streaming game content on the PlayStation 4, you have to believe that Microsoft is considering a similar tactic. The Agawi partnership is perfectly positioned to provide that support.

What we expect: Cable TV integration

We’ve also seen a significant amount of evidence that suggests Microsoft aims to position its next-gen gaming console as more of a home media center. That was always the hope with the Xbox 360, given its Windows Media Center integration. The feature was ahead of its time, however, with PCs still being chained to desks and workstations in most homes. It’s looking like the next-gen Xbox will go a step further, with one rumor suggesting that, in addition to playing games and Blu-rays, the console will function just like your cable provider’s set-top box would, right down to DVR functionality.

True, this falls more into the rumor category, but there’s fact that potentially supports it. We learned at the start of the year that Microsoft acquired R2 Studios, a firm with technology and patents in the realm of home automation. Nothing’s been confirmed, but it is believed that the acquisition is aimed particularly at enhancing the Xbox brand. R2’s knowhow could potentially be used to enhance SmartGlass to the point that your console-connected mobile device ends up doubling as a cable remote. This makes even more sense in a scenario where the next-gen Xbox fills the role of set-top cable box.

What we expect: Original programming

Other recent moves at Microsoft suggest an expansive master plan for offering next-gen Xbox users the means to access non-interactive content directly from their consolem with or without cable. The company announced the hiring of former CBS Television Studios executive Nancy Tellem in September 2012 as president of the new Entertainment & Digital Media division. Tellem’s role focuses on overseeing Microsoft’s new Los Angeles production studio, with an eye toward developing original content for Xbox.There’s even been some talk that NBC’s canceled series Heroes may return as part of an Xbox programming lineup.

It will be interesting to see how all of this ties in with Microsoft’s well-established console community features. Especially since the company acquired Skype in 2011; it is widely believed that the VoIP service will power the upcoming console’s chat features.

What we expect: Multiple price points with subsidized pricing

The last point we’ll focus on is pricing. The most recent rumor suggests a $500 up-front price tag for the console, though earlier hints pointed toward the possibility of multiple console models or bundles set at different price points. Despite the number of console models, there is one thing you can definitely expect: subsidized pricing. Note that the rumored $500 price is described as the “up-front” cost. It is very likely that, whatever the hardware price point falls at, Microsoft will offer the same subscription-based pricing on the next-gen console that it introduced at the tail end of the current generation on the Xbox 360.

The way it works now, you can head to a retailer like Best Buy and purchase an Xbox 360 console for $99 with a two-year commitment that carries a $15 monthly subscription cost. The console is yours for the two years, and the subscription also pays for Xbox Live Gold access for the length of the contract. It’s a lot like buying a new cellphone and activating it with one of the major providers. Don’t be surprised if Microsoft offsets the high price of an up-front next-gen Xbox purchase with this added subscription option. It ends up costing more in the long run for a piece of hardware that you don’t technically own, but it creates a lower-priced entry point for those who would like to be early adopters.

Bear in mind, none of this is definite. It isn’t entirely clear how successful Microsoft’s price subsidization of the Xbox 360 was. In fact, there’s one source in particular that seems to think subscription-based hardware pricing won’t factor into tomorrow’s reveal. More than that, it seems that Microsoft “scrapped” the idea all together, according to a tweet from Paul Thurrott, of Paul Thurrott’s SuperSide for Windows. He also notes in the same tweet that IllumiRoom will factor into tomorrow’s presentation. Thurrott is generally regarded as a trusted source of Microsoft news; he may or may not be right about this, but it is certainly worth mentioning here.