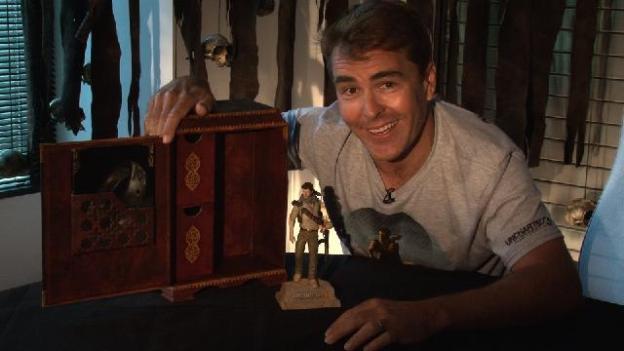 When it comes to videogame voice acting, there may be busier actors out there, but there’s no one who’s worked on as many hits as Nolan North has this year. Case in point, according to the actor one gaming site even broke down this year’s games as “Games with Nolan North” and “Games without Nolan North.” The man best known as Nathan Drake in Naughty Dog’s Uncharted franchise somehow found time in between working on Uncharted 3: Drake’s Deception, Batman: Arkham City, Assassin’s Creed: Revelations, Star Wars: The Old Republic and Uncharted: Golden Abyss to write a book.

But despite the variety of roles North has voiced, the character of Nathan Drake is near and dear to him. Before he found his way to notoriety as a voice actor, North was a journalist. Using his writing background, he penned actually Uncharted: Drake’s Journal – Inside the Making of Uncharted 3: Drake’s Deception.

The new book (which is available at www.gamespheres.com) is more than just a new gig for the actor. In addition to writing the book and helping with the video and photography, North is also publishing the book and its digital version (now available on iTunes.com) himself.

In this exclusive interview, the actor talks about his new venture, gives his thoughts on where he’d like the Uncharted franchise to go and his feeling son the upcoming movie currently being written by Neil Burger, and why he’s impressed with Naughty Dog’s recently announced game, The Last of Us.

How did this new book come to be?

I was constantly being asked by journalists how we made these games. Being this guy who got this stature in this part of the business, I felt kind of ignorant. I knew a little bit, and then I decided I really wanted to watch how Naughty Dog worked, so I started spending more time there. One day I was sitting on the couch in my house and I thought, Somebody should just interview those guys, or write a book about it. Then I thought, Why don’t I write a book about it?

Why did you start with Uncharted 3?

I actually wanted to do this with Uncharted 2, but the timing didn’t work. I decided to focus on Naughty Dog because unlike other games I work on, the Uncharted games require months of work with rehearsal and mo-capping and all the other elements. I regularly spend time at their offices talking about the story. I helped cast the project. It’s very close to me. And this book gives people an inside look at what goes on during that process.

What’s something interesting you learned while working on this project?

One of the things that got me hooked was when I was investigating Uncharted 2 and the stuff that went on with that, I learned about one guy who worked so hard, that at one point he stood up, passed out, hit his head on the desk, and knocked himself out. He woke up with the co-president looking over him saying, “Are you okay? Should we call a doctor?” He said, “No, I’ll be all right.” He went and got a cup of coffee and went back to work, because he had to get this level done. It was his baby. They treat each of their tasks like that’s their responsibility, and that’s their thing. He went and knocked himself out. These guys work so hard. I have so much respect for these guys, because they really bust their asses.

What are the challenges with each new game when it comes to evolving the character of Nathan Drake?

I’d love to give you all kinds of actor’s speak, but Nathan Drake is as close to who I am as anything I’ve ever played. When this whole role first came about and I was cast, Amy Hennig [creative director for Naughty Dog, and head writer of the Uncharted series] and I sat down and she said, “He’s you. Just make him you, except he gets into these situations.” That’s where I’m allowed to infuse my personality, sense of humor, and what have you. Nathan evolves as Nolan evolves. I just take the story, and the pieces of the story like now he’s with Elana, and we go from there. I have to respect that if we go in for a fourth game.

You’ve got three hit games now. Where would you like to see Nathan go next?

We actually just talked about this the other day. I was talking with Emily Rose, who plays Elena. We did a lot of press for Uncharted 3. One of the big things took us to Jordan. I got to ride horses and see the city of Petra on horseback and it was amazing, but it was out in the middle of the desert. We did a few days out there on this press junket for photo ops riding camels, even though there’s no camel in that territory. I guess somebody thought it was a good idea.

Sony also had camels to promote Uncharted 3 at Gamescom in Germany.

And they’re not even in the game. But we were laughing about the trip and said, “We’ve got to think about where we go next time.” I said, “I don’t know. Maybe skiing in the Swiss Alps? That would be nice. I could do a press junket.” Now we’re getting a little selfish with where would we like to go in Uncharted 4? How about Drake’s adventure on Lake Como in Italy? That would be pretty. Just because it’s like, “Where would I like to go visit?”

What are your thoughts about Uncharted going to the big screen with Hollywood?

I have mixed feelings on that. As this has progressed and things have gone on, I have a lot of people asking me, “Who do you want to play you?” It’s like, “Please, don’t ask me that.” I want me to play me. Nathan Drake is near and dear to my heart. They used to say it was an overseas issue for hiring bigger name actors, but I’ve gotten so much exposure overseas. So many gamers know who I am now in Europe, New Zealand, and Australia, that they’re like, “Let’s put the gaming guy in.” I do on-camera; I’ve done it for years. It’s the same thing. That being said, it’s not all about me. If they make a film, I hope they just stay true to who the characters are, and I hope they make it their own. I actually had one person say, “Why are they doing a movie? It’s already a movie.” It really opened my eyes, and I went, “Wow, I hadn’t thought of that.”

What are your thoughts on Naughty Dog’s new game, The Last of Us?

I think it looks amazing. It’s so cool that Naughty Dog has this fun, pulp-action adventure with Uncharted. And now they’re going to put their take on something that’s a little darker. One thing I thought that was really cool about it was the fact that here’s something that’s the end of humanity, possibly. The people are fighting for survival, clearly, and they run outside and it’s beautiful. If you look at the artwork, it’s beautiful. The green and the nature are taking back the city clearly, if you watch that trailer. I thought that was a brilliant move. The fact that in the face of all this horror, nature’s going to reclaim what it owns.