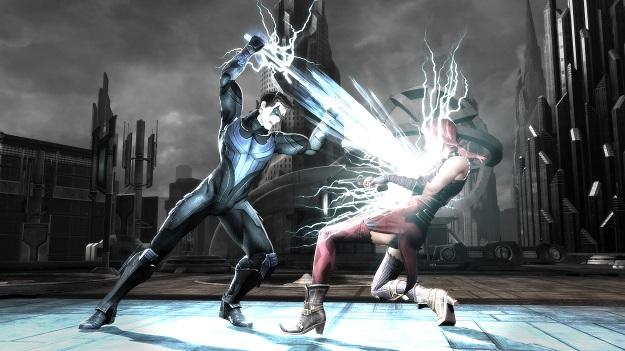 Fighting games all have a unique fingerprint. When a developer designs a fighting game, that game takes on the characteristics of the developer, regardless of what the content is. A perfect example of this can be seen with Capcom. A fan of Street Fighter can pick up any of the Capcom fighting games and feel comfortable with the controls. Those games all have a specific style and gameplay that is unique to them. So when NetherRealm Studios announced that it was making Injustice: Gods Among Us, a fighting game using a cast of characters from the DC Comics universe, it was an understandable assumption that the game would mimic the style of Mortal Kombat. But we were wrong.

Injustice does feel like Mortal Kombat in some ways, but it is also its own game. The move list is similar to that of Mortal Komabt, but beyond that, it acts and responds in a different way. One specific difference is the change in the way you block. The Mortal Kombat games are well known for using a block button. While that sounds innocuous enough, it changed the fighting mechanics and the way gamers approached the gameplay. Injustice does not have a block button, instead you hold back to block. The buttons are different as well, and rather than two punch and two kick, or strong and weak attacks, there are three attack buttons and a button that unleashes an attack specific to the character you are using. For a character like Flash, it will activate his powers, and the opponent will slow down to represent you moving at super speed, while Nightwing will combine his escrima sticks into a staff, which opens up a new moves set. Each character is different.

Each character also has a special attack that is powered up during the fight. Once it is filled, pressing the trigger buttons together begins an incredibly powerful attack. Solomon Grundy takes knives and hatchets out of his back to slice his opponents in a cinematic, the Flash takes a running start around the world and hits his foe, Wonder Woman slashes her opponent with help from her Amazonian brethren. Each character has his or her own cinematic attack. It can be dodged, but it is difficult. It’s similar to the new Mortal Kombat x-ray attack, but less gory and more in line with comic books flair.

The levels will also have a bit of Mortal Kombat flair. They are all modeled on DC locations and will be steeped in lore. Of the two that have been announced, the Batcave and the Fortress of Solitude, both are filled with background items that fans will love. The Batcave will feature a computer running villain profiles, while the Fortress is chalk full of Superman history. Doomsday is clearly seen in the background, just feet from the bottled city of Kandor, and Superman’s zoo is also featured. All levels will also have multiple sections to them, and punching an opponent in the right spot can send them crashing through a wall – or the Phantom Zone as the case may be — to an new area. The levels will also feature environmental items that can be used as weapons. A hanging display, for example, can thrown at an enemy.

So far only nine characters have been revealed, but there will be over 20, and maybe even many more. The exact number has yet to be released, but the characters currently on display are: Superman, Batman, Wonder Woman, Flash, Cyborg, Harley Quinn, Catwoman, Solomon Grundy, and Nightwing (developer Ed Boon’s favorite character). The remaining fighters will be unveiled over the next few months, but there are some you can certainly expect like the Joker, Green Lantern, and more of the more familiar faces.

The characters will also fill certain roles. Superman is a heavy bruiser, slow and powerful, while Flash is a faster character that can make up for weaker attacks with quantity. All of the characters are also broken up into one of two groups, those with powers and those with gadgets. Superman and Wonder Woman are obviously power characters, while Batman and Catwoman are gadget characters, to name a few.

Now, if you are a fan of DC comics, you may wonder how Wonder Woman could go head to head with Harley Quinn and not pulverize her skull with a single punch. Longtime comic fans could probably make an argument that Batman could take Superman with careful planning, but it seems doubtful that it would make for a good 2D fighting game. NetherRealm Studios is promising that there will be a legitimate reason for this that will be part of the storyline.

There is one minor edition to the gameplay that could have a huge effect on the course of the fights. When you are forced into a corner, on each level there will be a button (or something similar that you can interact with) that you can press. When you do, it will unleash an environmental attack on your opponent. The level will dictate the attack – it could be missiles from the Batmobile or a boom tube that allows you to warp behind your opponent and hit them — but it will give people that find themselves under constant attack a way to get out.

Injustice: Gods Among Us is shaping up nicely. The game still has the distinctive feel of Mortal Kombat in some ways, but it is more like cousin than a clone. The fighter feel appropriately different from one another, and it will be interesting to see what other characters make the cut and end up in the game. NetherRealm and Warner Bros Interactive Entertainment haven’t given a release date yet other than 2013, but fighting fans and DC comics fans alike should keep an eye out for this one.