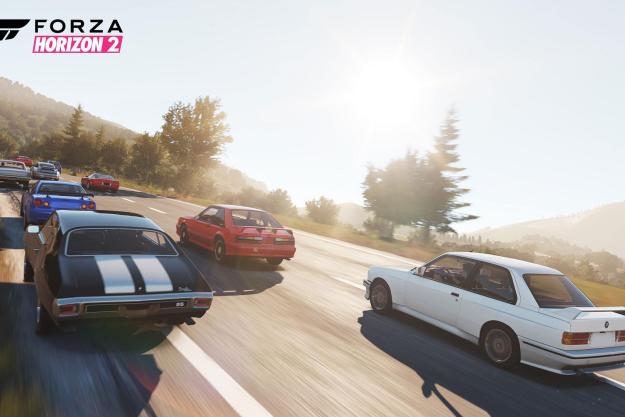 “Forza Horizon 2 is light on challenge, heavy on fun, delivering one of the most exciting and enjoyable racing games in years.”

Life begins at 100 mph. The revving motor, the screaming wind, your tense grip on a steering wheel that threatens to buck free at any moment… there’s driving, and then there’s driving. The sense of velocity in Playground Games’ Forza Horizon 2 is absolutely exhilarating whenever you crest one of Western Europe’s lush, rolling hills alongside a dozen other drivers. You can go anywhere, do anything. It’s just you and your car against the other drivers — and the world.

More than anything else, Playground captures the adventurous spirit of the road trip in Forza Horizon 2. Much like its predecessor, the game is structured around the Horizon Festival, a racing and music-focused gathering of enthusiast from all corners of the globe. The landscape has changed, though; where Forza Horizon carved out an open world in the heart of Colorado, its follow-up spans a wider stretch of terrain that straddles France and Italy.

Playground captures the adventurous spirit of the road trip in Forza Horizon 2.

The basic flow follows your mute white dude driver – the lack of any character creation is baffling given that the “protagonist” is little more than a prop in the handful of cutscenes – as he takes on a series of themed racing championships. Once you score enough wins, it’s time for the Horizon Festival finale. Finish that and the whole process starts anew.

The spaces in between championship races hold the usual crop of open world activities, though with a distinctly Forza twist. Bucket List challenges amount to a sampler plate for some of the game’s more desirable rides. Sure, you can buy a Ferrari F40 later on in the game, but it’s more fun to hop inside of one as the goal “outrun the sun” flashes across your screen. It’s a time trial like any other, but Bucket List infuses challenges like this with added personality.

Promotional billboards, rare and unusual Barn Find vehicles, speed traps, and photo challenges fill out some of the other dangling carrots. Like the Bucket List content, all of these collectibles lend additional variety to your championship journey. Variety means everything in a racing game, and Forza Horizon 2‘s open world really runs with that idea.

The road to the championship is itself rewarding, a series of multi-race circuits that are themed around specific types of cars. The game actively encourages you to explore and try out different rides, but it’s entirely possible to just geek out on all the muscle cars, or super cars, or trucks, or anything else, by tailoring your championship selections accordingly.

There’s less variety in the types of races, however. The “tracks” amount to a series of checkpoints spread across the open world, for either lap-based or point-to-point showdowns. It’s an understandable choice given how much territory there is in Playground’s take on Western Europe, but the track layouts can be difficult to follow, especially when the action moves off-road.

Forza’s trademark rewind feature helps in these situations – make a mistake and you can turn back the clock a few seconds with the press of a button – but the way it’s all designed, you never feel like you’re learning a track. That’s such a critical component in most racing games, coming back to a particular race again and again before you eventually conquer it. That’s not what Forza Horizon 2 is about, though.

Forza Horizon 2 is bigger and faster, sure, but it’s also a masterful snapshot of the joy that fuels car culture.

In many ways, both of the Horizon games feel like a purer take on the experience that Turn 10 always sets out to deliver in the main Motorsport series. Forza’s transformed over time from a racing-first simulation into a celebration of car culture. The rewind feature, handy as it is, sometimes feels more out of place in the simmy Motorsport games than it does in Horizon.

Playground really leaps on the “car culture” ethos in Horizon 2. Car Meets amount to multiplayer lobbies with no race attached, no endgame. You just park alongside a lineup of other cars, all of which can be scrolled through, inspected, and even purchased, and engage with other players in a public voice chat. From these random encounters, it’s easy to set up more structured activities, like races.

Separate from that are Online Road Trips, which drop you into an online version of the open world, filled out with other human drivers. There’s no goal here; it’s just a cruising mode. Drive around, chat, hunt collectibles, come up with on-the-spot activities… that open-endedness is by design. There are similar road trips in the single player game that take you from one championship location to the next; like the online variant, these goal-free drives are all about reveling in the thrill of the open road.

In a welcome touch, Forza Horizon 2‘s open world is filled with the Drivatars of your friends, pulled from data gathered by Xbox One launch title Forza Motorsport 5. All of these drivers are AI-controlled in single player mode, but their behaviors are modeled after those of their human counterparts. It was always fun to find yourself racing against robot versions of random friends in Forza Motorsport 5, and it’s even more enjoyable to come across them – and maybe terrorize them a bit – in Horizon 2‘s open world.

It’s also just a beautiful game, top to bottom. The world is rich and full of variety, with no egregious overuse of repeating textures. Visual effects, such as the way the sun glints off craggy cliffs and the splattering of rain across the windshield in cockpit mode, give way to downright breathtaking reality check moments where you’ve got to remind yourself that, yes, this is indeed a video game. That’s not hyperbole; Forza Horizon 2 is the sharpest game yet for Xbox One, visually.

There are a few questionable choices. The aforementioned lack of character creation needlessly alienates a large swath of potential players by forcing them to drive as Generic White Dude. The game is also screaming for user-curated radio playlists. The existing music selection is diverse enough, but mixtapes go hand-in-hand with road trips. Forza as a series expertly captures the spirit of car culture, but it does feel lacking with regards to the important symbiotic relationship between long drives and car stereos. Something for Horizon 3, perhaps.

The bigger issue relates to difficulty. You can tweak that to some extent in the settings, but the fundamental reliance on Drivatars eliminates the sort of escalating difficulty that most video games are built around. There’s something to be said for the user-friendliness of it all – this is an arcade-style racing game that virtually anyone can pick up and do cool things with – but it also contributes to a feeling of sameness as you take on race after race against opponents whose skill levels are fixed. If the moment-to-moment racing weren’t so satisfying, it would grow dull quickly.

But then, it never really feels like Forza Horizon 2 is supposed to be about challenge. You’re not mastering these vehicles, you’re reveling in their existence. Soaking up the finest qualities of what they have to offer in challenges that feel like they’ve been designed as a pure celebration. As a distillation of everything the Forza series has come to represent, the Horizon games capture that essence perfectly. And Forza Horizon 2 is an achievement that handily eclipses its predecessor. It’s bigger and faster, sure, but it’s also a masterful snapshot of the joy that fuels car culture.