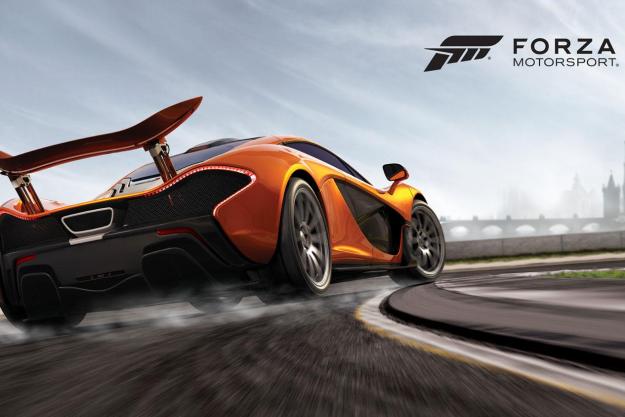 “Forza Motorsport 5 combines superior visuals, futureworld technology, and the series-standard love for cars and car culture into a flagship launch title for the Xbox One.”

Forza Motorsport 5 is an unlikely flagship for the Xbox One launch lineup. It may be a technical marvel and a showcase for the new console’s capabilities, but there’s no story, no threat of war, and not one thing explodes. Ever.

Instead, you race. A lot. At 60 frames-per-second, while robot drivers pulled from the cloud try to mess up your day, often by ramming your car off the sun-dappled asphalt. It may not be one of those new fangled shooters that the kids love so much, but Turn 10 Studios’ latest Forza is the most immediately impressive Xbox One launch game, top to bottom.

Little has changed since Forza Motorsport 4 in terms of overall structure. You start out by selecting your first, free car, and then running through a series of starter races. Once you’ve generated a small pile of credits, you can upgrade or start shopping for a second car. The more you race, the more experience you earn toward both your overall driver level and your brand-specific car affinity.

The evolved Drivatar is a standout feature, representing an evolution for the series and a raising of the bar for all competitors.

Progress is marked as you participate in a variety of randomly offered events that are primarily tailored to what’s in your garage. If you don’t have any A-class vehicles, for example, you’ll see fewer events requiring that level of car. Forza 5 is always encouraging you to build a connection with what’s in your garage, but ultimately, the overall rhythm of the game is easy to break down: Race, repeat. Race some more. It’s the details that make Forza 5 special.

Chief among those is Drivatar, a familiar buzzword for the series that’s been redefined here to refer to robot versions of your Xbox friends. Forza 5 is constantly monitoring your in-game race behaviors, and then using that data to build an AI profile that participates in races when you’re not playing. It’s a little bit creepy, until you realize that your robo-self is also earning you credits while you’re away that you can collect the next time you fire up the game.

Forza 5 is still young so it’s hard to say how these Drivatars will evolve over time, but as things stand right now … well, they’re a vicious bunch. Non-human drivers in racing games tend to stick to a script; some drive more swiftly than others, but the actual handling of the car is often technically perfect. Not so with a Drivatar.

Your robo-friends demonstrate surprisingly human behaviors. They’ll commit the cardinal sin for all “serious” racing games, physically jostling your car as they pass. They’ll take a turn too sharply and lose the pack when they spin out. The best Drivatars even seem to be aware of what’s coming up behind them and aggressively block pass attempts. It’s not all focused on you as the lone human racer, either; your AI opponents mix it up amongst themselves just as much.

On a purely functional level, the scary-impressive capabilities of Drivatars enhance the quality of any non-multiplayer race. You’re not necessarily racing against tougher opponents, you’re just seeing more human-like behavior. Even though it’s not technically an online race, it still feels like one. There’s also the emotional impact of seeing a friend’s Gamertag zoom past you, as opposed to a nameless, faceless computer driver. This creates a feeling of investment that is impossible to quantify; you know they’re not your friends, but they also are, kind of, and so of course you want to trounce them.

The evolved Drivatar is a standout feature, representing an evolution for the series and a raising of the bar for all competitors, but that’s not the only enhancement to the Forza formula. The overall presentation is just outstanding. The showroom-like Forzavista – a retooled take on Forza 4‘s Autovista, complete with returning Top Gear talent – slows things down enough for you to inspect a car closely. Leather seats actually look like leather up close, rather than a flat texture that’s been painted to resemble it. There’s a sense that these are real objects as opposed to video game artifice; as much as Forzavista is “car porn,” it’s also a welcome showcase for the improved capabilities of Microsoft’s new machine.

Force feedback in racing games is typically reserved for full-fledged racing wheels, but the new controller holds its own just fine.

The same goes for Turn 10’s implementation of rumble, which takes advantage of the Xbox One controller’s four motors. Force feedback in racing games is typically reserved for full-fledged racing wheels, but the new controller holds its own just fine. Jam on the brakes at high speed and you’ll feel actual resistance in the left trigger as you pull it. Roll over a bit of dirt as you cut around a turn and you’ll feel the rumble vibrate across the controller in the same direction. It’s subtle, but immediately noticeable.

Multiplayer delivers as well, with a variety of events broken down into multiple categories, including monthly events, car class-specific leagues and races, and special events with specific requirements – such as RWD-equipped cars only – that don’t necessarily fit under the class-only umbrella. Forza 4‘s auction house appears to be gone, though there’s still an extremely flexible creation engine for building (and then sharing) your own liveries, aka paint jobs.

So. What’s missing? Lots of content, for one. After Forza 4‘s 500+ cars and two dozen-plus tracks/track variants, it’s disappointing to see those numbers roughly halved in Forza 5. Yes, there’s the issue of quality to consider – everything looks and handles better than ever – but it’s small consolation when you’re talking about a game that could eat up 50 hours or more. The reduction in tracks is especially noticeable; you’re racing on repeats much sooner now than you did previously.

There’s also the basic barrier to entry. Even with all of the driver aids turned on, Forza 5 is not a forgiving racer. It’s a sim rather than an arcade game. Fans know that going in of course, but what of the new Xbox One owners that just want to enjoy a pretty, undemanding racer? That’s not what Forza is, not what Forza’s ever been. It’s not a knock against the game for staying true to its identity, but it’s something any newcomers should know about one of the new console’s high-profile launch titles.

The biggest issue is the nagging presence of microtransactions, a feature of just about every first-party launch title. In Forza 5, these micropayments take the form of Tokens, a secondary in-game currency that you can buy in bundles with real dollars; the largest of these is 20,000 TK for $99.99. You don’t actually need the Tokens, and can earn all the credits you want to buy cars without spending a real penny, but it’s more time-consuming. As with the barrier to entry issue, this is less a case of poor design and more a troubling sign of where games are headed and how publishers intend to leverage moneymaking opportunities out of them in the years ahead.

Forza Motorsport 5 is one more success for Turn 10 Studios. The cutback on content following the studio’s previous effort is disappointing, but there’s still a huge amount here, and more cars than most players will ever actually use. Any shortfall is more than made up for in the forward strides toward a more realistic racing sim. The best-of-launch visuals and overall outstanding presentation, coupled with the scary-awesome presence of Drivatars, assert Forza 5 as the uncontested stunner in the Xbox One launch library. As long as you’re cool with a total absence of guns and explosions in your video gaming, this is your must-grab title on day one.

This game was reviewed on an Xbox One using a copy provided by Microsoft.

Topics
Warzone 2.0 Season 2: release date, Ashika Island map, and Resurgence mode
The best PS5 controllers for 2023
The best upcoming PS5 games: 2023 and beyond
PS Plus adds Evil Dead, OlliOlli World, and more in February
WWE 2K23 improves the wrestling sim with subtle tweaks and a bit of chaos
Meta Quest Pro VR headset is $400 off (and save on Meta Quest 2)
How to change classes in Fire Emblem Engage
Fortnite: How to collect Dragon Balls on Adventure Island
How to get all Emblems in Fire Emblem Engage
Fire Emblem Engage bond levels: how to get max Bond Levels fast
Marvel Snap Battle Mode: How to play Marvel Snap with friends
Best Gaming PC Deals: Save on RTX 3070, 3080, 3090 PCs
The best video game remakes reinvent the classics, they don’t just revisit them