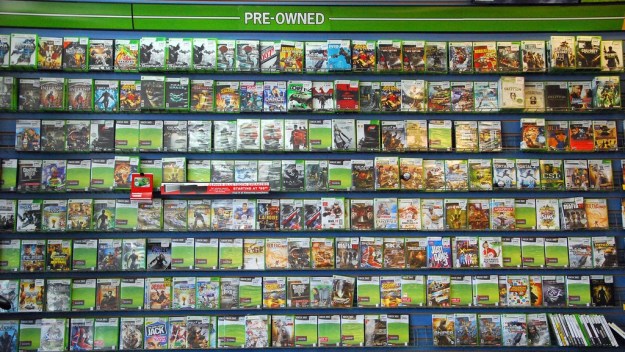 GameStop does not want the PlayStation 4 and Xbox 720 to block used games. The retail chain is already closing 250 stores around the world over the next year, and only opening or acquiring 100 new locations over the same period. No more growth for the one-time titan of video game retail profits. Fewer people are buying video games in stores, and for a company whose profits live and die by the used game market, a future where Durango and Orbis don’t play used discs looks particularly dire.

“Over the course of the last year, we’ve had the opportunity to do research, and share that research with the console makers, and to demonstrate to them that consumers want the ability to play pre-owned games,” said GameStop CFO Rob Lloyd at the Goldman Sachs Technology and Internet Conference, “They want portability in their games, they want to play physical games. To not have those things would be a substantial reason for them to not purchase a new console. I think approximately 60-percent of customers have said that they would not buy a new console if it didn’t play pre-owned games.”

The argument against used games has always been that it takes money out of the hands of publishers and developers. A new copy of Call of Duty: Black Ops 2 sold at GameStop sees a percentage of the sale going on to Activision Blizzard and the studios involved in the production, from Treyarch to Ravensoft, see their compensation affected by those sales. When GameStop buys back a copy of the game for store credit and sells it again for $50, that entire sale goes to GameStop. This is why more and more console game publishers have included “Online Passes” for multiplayer games or single-player games with online components. Those single use codes ensure that even a used game can hopefully generate some revenue.

As it’s always done though, GameStop insists that the used game market is vital to the health of next generation consoles.

“Publishers understand that a healthy pre-owned games market helps them to sell more new games and the reason is that our buy-sell-trade model puts over $1 billion worth of currency in the customer’s hands every year. And that currency goes primarily to the purchase of new games.”

Lloyd acknowledged that even though it’s pushing Sony and Microsoft to play its way, GameStop will still be in the PlayStation 4 and Xbox 720 business. “We’ll be able to sell the new consoles regardless of what features, or what they do or don’t allow. We’ll have leading market share on the sales of those consoles, we’ll adapt to what it does to the pre-owned business, and one of the ways we’ll do that is through a continued healthy pre-owned business for today’s generation of consoles.”