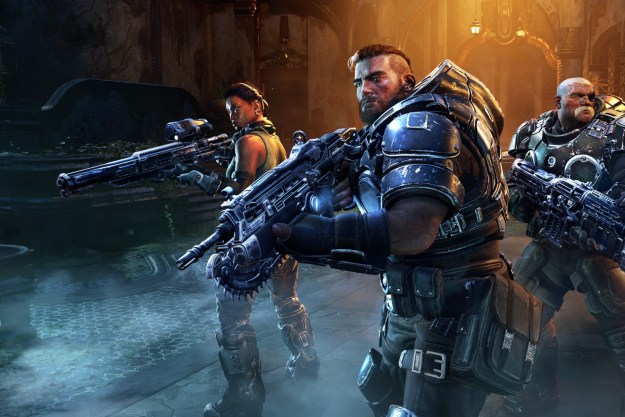 “...Gears Tactics doesn’t have to rival the latest main-series game to get across the franchise’s grand ambitions of worldwide conflict.”

Gears Tactics is another attempt to entice onlookers into the long-running franchise that put Microsoft’s Xbox 360 firmly on the map. After more than 14 years of gruff voices and bulging biceps,  turn-based death and destruction wrapped around the series’ signature sauce make for the most exciting addition to the saga since Gears of War 2.

What we have here is a turn-based strategy title all about everyone’s favorite band of block-headed bros and their struggles against the infamous Locust horde.

Commanding a tiny but cocky team to splatter freaky lizards feels familiar yet different enough to pry Gears veterans from its third-person roots while giving strategy fans the kind of small-odds stand-offs they thrive on.

Gears Tactics doesn’t hold your hand, but it will inspire you to execute the grub-slaying strategies your online buddies would usually botch. It’s a testament to a franchise that perfected gory combat from its inception, and this tactical approach to its format should have been done years ago.

Gears Tactics is a prequel set 12 years before the first game, as Gabe Diaz takes the reins. His team is tasked with murdering Ukkon, the enigmatic engineer behind the iconic Brumak and Corpser monstrosities, and he isn’t afraid to use his grotesque creations to stop you.

To put Ukkon down, you recruit and replenish heroes and foot soldiers, with their roles decided by which one of five iconic weapons they prefer.

It may not sound like much to mess around with. Still, the tight design helps to keep the core elements of combat simple, with more sophisticated strategies being born through the direction you decide to take their unique talent trees as they level up through combat.

With only the occasional cutscene moving the narrative along, you’re almost always facing off against the enemy. There’s very little menu fluff to get stuck into, which is good given the menus wouldn’t look out of place on a mobile phone.

Once you’re out in the open, it’s all hands on deck. No matter which of the four mission types you find yourself in, your squad of four or fewer units land in the same position with the fog of war obscuring nearly everything until you push forward through the mud.

There’s a decent amount of variety when it comes to mission objectives, but they all boil down to the same thing: Kill some freaky lizards.

Each turn looks, feels, and sounds like a Gears of War skirmish.

Each unit expends a limited amount of AP per turn between offensive and defensive actions, and you can cycle through your team to optimize your budget.

Cinematic executions return and are encouraged to get the most out of your team’s strict action limit. It really wouldn’t feel like a Gears game without them.

The way Gear’s iconic action sequences seamlessly translate to this turn-based formula creates a combat dynamic that feels shockingly accurate to the source material while providing a welcome new perspective. The idea to take an existing Gears game and simply move the camera up begins to make sense here.

Each turn looks, feels, and sounds like a Gears of War skirmish playing out from a different angle. Units slide into cover and fire (and miss) from behind, and the cinematic kill-cam occasionally goes over a unit’s shoulder to get you closer to the action.

Loot caches scattered across each battlefield award random weapon attachments and equipment at the end of the mission, padding out the time spent between tasks by offering plenty of character customization. Once you start to recruit more allies, you’ll spend a good five to 10 minutes between each mission, ensuring their equipment and abilities align.

Popping a Boomer’s head and using its grenade launcher to burst Wretches is just icing on the cake, and tossing a pineapple into an emergence hole still feels worthy of a high-five from whoever’s around.

Tactics on the battlefield, strategy in the menus

Story progression and mandatory side-missions facilitate the need for reserve troops. You can’t retrieve a unit’s equipment if they’re used even once in a multi-mission chapter, making loot management another thing to keep tabs on. By the time you reach some of the later acts, the wonky customization menu starts to complicate things.

Gears Tactics gets the franchise’s grand ambitions of worldwide conflict across effectively.

Unless you’re a master tactician, memorizing each unit’s dozen or so passive and active skills isn’t easy. A list of each unit’s traits can be called up, but attempting to squeeze the most out of every turn is a serious mental workout that can tax newcomers.

It’s the kind of information overload that veterans of the series are bound to fall in love with, and one that wouldn’t be quite so problematic if you were able to take the same team into each mission.

The slower turn-based pacing of Gears Tactics breathes new life into the franchise, which is all about a nearly never-ending war of attrition. The series has begun to embrace a more open-world feeling, but rather than exploring before another big battle, having the time to pan around during an ongoing skirmish somehow helps the decimated world of Sera feel more alive than ever.

As with previous entries, Gears Tactics is still plagued by texture pop-in issues, and anyone but the main cast looks and sounds a little stiff. But once things load properly, Gears Tactics gets the franchise’s grand ambitions of worldwide conflict across effectively.

You’re more likely to cheer on a good grenade toss or a lucky critical hit than to complain about technical quirks or hit-calculation methods.

Just as with Gears 5, my keyboard and controller were constantly battling for control over the action, creating camera and cursor conflicts. Paired with the inability to check enemy hit chances only to have the line-of-sight indicator lie, there were times I felt the game wasn’t being entirely fair.

But, on a lower difficulty, there were far more cheers of victory than tears of anguish. There were gameplay sessions that, paired with a menu that already feels touch-intuitive, could easily translate to mobile devices sometime in the future. XCOM did it, and I wouldn’t mind taking Tactics on the train.

Gears Tactics is my favorite Gears game in years. It isn’t nearly as feature-rich as the main series titles. Still, its slower pacing is an exciting new way to enjoy the crumbled civilization of Sera, whether you’re a long-time fan or a newbie looking for a new big-budget strategy title.

A few technical issues aside, it has reinvigorated my love of a franchise I truly thought wouldn’t survive the next-gen leap. It turns out, it wasn’t the increasingly complicated story pushing me away from the franchise, but rather the same tired gameplay loop it has employed over the last decade and a half.

Gears Tactics is a brilliant next step for a series that hasn’t seen much in the way of innovation since its inception. It’s not massively ambitious, but it’s bloody good fun.

It’s XCOM in the Gears universe. Both games have many years of lore behind them that isn’t at all necessary to their enjoyment, making them equals right now. You’ll get the same core experience. It’s more a question of which world you’d rather dive into first.

A few dozen hours, for sure. It all depends on how much prep you put into each turn. There are multiple difficulty options with key strategy game modifiers to add the heat. If you’re up for a challenge, you’ll be playing this for a long time.

That depends. Being a Microsoft-owned IP, every game in the franchise is available on GamePass in some way. It’s worth the $60 price tag to hardcore Gears fans and absolutely worth a few bucks to quickly run through if you’re new to the franchise.