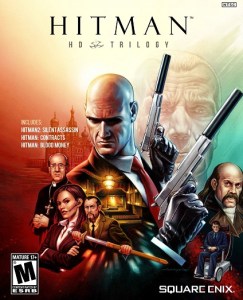 The title Hitman HD Trilogy is a bit misleading. While the newly released HD collection from Eidos Interactive and Square Enix does indeed pack together the three Hitman games for consoloes released prior to 2012, it does not qualify as a complete set since the first game in the series – Hitman: Codename 47 – continues to be exclusive to PC. It’s not fair to hold the absent PC game against this Xbox 360 and PS3-only collection, but it’s a glaring absence that deserves mentioning. If you’re looking for a fully comprehensive collection of pre-2012 Hitman games, this is not the set you’re looking for. It’s likely the best that you’re going to get, however, and that’s okay.

The Hitman HD Trilogy gathers together Hitman 2: Silent Assassin, Hitman: Contracts, and Hitman: Blood Money into a single box. Blood Money is identical to the current-gen 2006 release. It comes on its own disc, it uses the same set of Xbox 360 Achievements, and it appears to be completely unchanged in any conceivable way.  There’s just a new title image printed onto the disc. The game continues to hold up very well. It lacks the improvements introduced in last year’s Hitman: Absolution, but levels like the opera house or the Christmas party are just as memorable as they’ve ever been.

The two earlier games are lumped together on a disc of their own. The HD refresh, which also of course includes support for widescreen displays, is a welcome improvement, but it’s still impossible to ignore the fact that these are old, old games. Hitman 2 suffers the most, unsurprisingly, with a control scheme that feels awkward and poorly optimized for current-gen gamepads. It’s more a product of the game than the quality of the port; Hitman 2 certainly works in the context of what it is, but you can definitely feel the 10-year gap since its release peeking through.

Contracts fares better, with the original game’s improvements on Hitman 2 carrying over just as well here. The gamepad controls make much more sense and the addition of an easily accessible map improves the playing experience considerably. Contracts is also likely the reason that we’ll never see a properly comprehensive Hitman HD collection; many of the first game’s levels were refreshed in the 2004 release, and those same sections of Codename 47 have always suffered by comparison.

On the technical side, the two older games don’t seem to have been put through any kind of significant remastering process. The resolution is upped to 720p and widescreen displays are now supported, but the textures and character models don’t appear to have been swapped out with new ones. If any remastering work was done at all, it’s very subtle.

The only real flaw with this collection is the fact that these games, even Blood Money, are as imperfect as they’ve ever been. Hitman: Absolution is a nearly perfect execution (no pun intended) of the ideas laid out in the original game, but the titles released between Codename 47 and Absolution serves as snapshots of both the technology available at the time of their development and the evolution of the series as a whole. None of them, not even Blood Money, deliver capably on the promise of putting players in the shoes of a smooth professional killer.

Achievement and Trophy hunters will no doubt appreciate having new awards to shoot for, though Gamerscore junkies ought to note that the 1,000 points of cheevos splits evenly between Hitman 2 and Contracts. Blood Money still uses the same Achievements that it did before, but note as well that it’s a brand new release on PlayStation 3 with this collection.

Given all of that, newcomers to the Hitman series should probably just stick with Absolution to see what 47 can really do. There’s definitely value in revisiting these three older games, particularly the superior Blood Money, if you have fond memories of playing the originals. You also might want to take a peek if you’re freshly done with Absolution and would like to see how the series developed into last year’s release. The Hitman HD Trilogy is an artifact, however, capturing three earlier moments in video games when things weren’t quite as shiny or artificially intelligent as they are now.

Hitman HD Trilogy was reviewed using an Xbox 360 version of the game, as provided by the publisher.