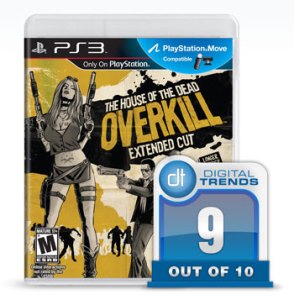 House of the Dead: Overkill, from Sega, continues to be one of the best gaming experiences one can find on Nintendo‘s Wii. The new House of the Dead: Overkill Extended Cut doesn’t really fill the same role in its new PlayStation 3 release, but that doesn’t really matter. Shooting zombies for points is still ridiculously entertaining, and the experience is further enhanced by some of the funniest writing that video games have yet seen.

The hook with Extended Cut, just like Overkill before it, is dressing up an on-rails light gun shooter to look like a stunningly bad, and over-the-top B movie. If you saw the Quentin Tarantino/Robert Rodriguez double-feature Grindhouse, you already have a sense of this game’s tone. The biggest difference in the PS3 game, other than newly enhanced high-def graphics, is the addition of two levels starring Varla Guns and newcomer Candi Stryper.

The two added levels explore a little of Varla’s back story while Agents G and Washington continue on their hunt for Papa Caesar. These two levels come early on and feature the same sort of action that typifies the rest of the game, though the writing definitely isn’t as strong. Varla is funny enough in her own way, but Candi is flat-out annoying. You’ll be tired of hearing her voice before she finishes uttering her first sentence. It’s usually not a big deal when a game’s story fails to deliver, but the adventures of G and Washington are so funny on their own that it’s surprising to see the two Varla/Candi-centric levels sputtering out.

Fortunately, the bits that you play are every bit as entertaining as the rest of the game. The new stages bring in some additional, and occasionally very gross, zombie models, as well as two bosses, one per level. The boss fighting process in general has been streamlined since the game’s Wii release, with a second meter appearing on screen whenever you have a chance to interrupt a boss’s forthcoming attack; shoot the right spots to drain the blue meter before the attack is triggered to preserve your health a little while longer.

The levels themselves feel slightly rejiggered as well, though this could just be my time away from the Wii original talking. The action feels great though thanks to the entirely expected Move support in Extended Cut. The game is actually at its best when you’re using a Sharp Shooter mount — really, this may well be the best reason to own one yet — but even using just the basic Move motion controller is satisfying.

It works exactly like you’d expect it to; point and shoot. The Move offers greater accuracy than the Wii remote does too, so it’s pretty easy to line up headshot after headshot. There’s also support for DualShock controllers, though it’s definitely a less-than-ideal way to play. Kudos to Sega for letting even non-Move owners take a crack at the game, but playing with an analog thumbstick only makes you want for motion controls.

More Than Wii Can Handle

All of the Wii game’s modes return, though the Director’s Cut — which unlocks after you finish the story once — sees the most improvement. At base, you’re still looking at longer and harder re-cut version of each of the game’s levels, new ones included. There are also some additional weapon unlock options in the game’s Gun Shop as well as unlockable “cheats” that can be used to amp up the challenge, such as by adding more zombies.

On top of all that, you’ll find more collectibles to hunt for in each level, including the very welcome addition of glowing green cash pickups. If there was any big complaint about the Wii original, it’s that earning money became too difficult after running through the story and Director’s Cut once.

Lastly, House of the Dead: Overkill Extended Cut includes stereoscopic and anaglyphic 3D support. The former requires you to have a special TV and an expensive set of glasses but the latter is just your basic 3D, the sort that people went to the movies and wore glasses for as far back as the 1950s. Oddly, the game does NOT include a packed-in set of 3D specs; you’ll need to scare up your own if you want to take advantage.

Overall, this is a pretty great package. The added story doesn’t offer much, but the new levels are fun to play through and bring a pair of disgusting new bosses into the mix. It’s somewhat baffling that 3D glasses aren’t included to take advantage of the new display mode, but that’s a minor point. More important are the boosted HD visuals — which look as good as an HD-ified Wii port can — and Move-supported gameplay. This is still an on-rails shooter, so its mileage may vary for some fans, but Extended Cut steps things up for its PS3 release in every way.