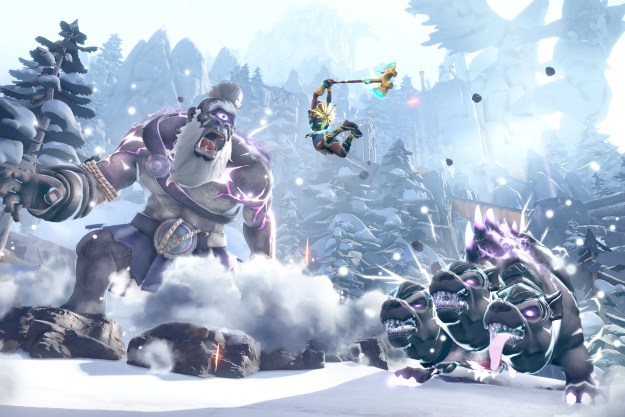 “Immortals Fenyx Rising merges the best and worst of Ubisoft games with The Legend of Zelda: Breath of the Wild.”

Immortals Fenyx Rising may not perfectly match the organic exploration of The Legend of Zelda: Breath of the Wild, but it more than makes up for its shortcomings with gorgeous design, a witty script, and excellent combat.

This will be publisher Ubisoft’s third massive open-world game in two months, and is the only one not a part of an established franchise, but doesn’t mean it’s any less worthy of your time.

Its structure is all Breath of the Wild

Earlier this year, a gacha game (those that employ a capsule-toy vending machine mechanic) from developer miHoYo came onto the scene. Called Genshin Impact, it was immediately compared to The Legend of Zelda: Breath of the Wild, which it very closely emulates. Immortals Fenyx Rising is even more of a clone of that popular game than Genshin Impact.

You play as Fenyx, a customizable Ancient Greek soldier, who wakes up after having shipwrecked on a small island. You are prevented from accessing the rest of the map until you complete a few objectives that ultimately net you a tool to glide off of the peninsula. Once you arrive on the mainland, there are four powerful deities you must visit in order to gain their power and defeat the enemy at the center of the map. That foe is Thypon, who you can face from the moment you arrive if you so choose.

Immortals Fenyx Rising more than makes up for its shortcomings with gorgeous design, a witty script, and excellent combat.

Swapping out Link for Fenyx and Ganon for Tyhpon, this is a nearly identical structure to that of Breath of the Wild. There are hidden puzzles to solve around the world, which you traverse with your glider. You also have the ability to climb anything — as long as you have the stamina for it. There are resources to collect, new armor and weapons to wield, and numerous vaults to explore, which contain even more puzzles that reward you with an item to upgrade Fenyx’s abilities.

The world is going to have to get used to games borrowing the formula for Breath of the Wild. It’s the new Metroidvania, and much like those games, its design is too appealing to just leave behind. The good news is that Immortals nearly captures the same magic, aside from one glaring flaw.

Breath of the Wild had incredibly natural discovery. As Link, players would set out on a journey from one divine beast to the next, being drawn away from their unique path whenever their shrine sensor would start beeping, or some distinctive topography would catch their eye.

It meant that you always had a sense of pushing forward, even if you naturally doubled back. Immortals doesn’t have this.

You can find yourself standing in place for minutes at a time, endlessly marking puzzles or resources, and you’re never, ever done. Granted, you could forgo using this ability at all, which I eventually did, and you will stumble across something interesting regardless. But Immortals has much more of a focus on leveling up Fenyx and upgrading her abilities, and the more I refused to use the tagging system, the more I realized the game was designed with it in mind explicitly.

Therefore, it rarely feels like you’re pushing on ahead with your quest, and more like you’re pinballing from one marker to the next, even if you refuse to engage with the system.

In addition, whereas Link acquires all his abilities within the first few hours, Fenyx slowly obtains them over the course of game. Simply leaping upward while climbing a cliff? You have to unlock it, and the traversal feels incredibly disjointed without some of these key elements. This can be remedied by quickly obtaining enough resources to upgrade Fenyx, but it’s just yet another barrier to organic discovery.

It’s a difference from Breath of the Wild that on the surface feels small, but vastly changes how the game feels in the moment to moment. Thankfully, the game’s map is much smaller than other Ubisoft open-world titles, and its list of activities doesn’t feel nearly as bloated.

Here’s what Immortals does differently

I’m happy to report that the rest of the deviations from Breath of the Wild are fantastic, and that starts with the writing. While Link’s adventure can feel somewhat empty and dry, Immortals is dripping with character and humor.

The game is narrated by Zeus and Prometheus, two god brothers who play off each other with quips and banter that had me constantly chuckling throughout the game. Mixed in with their comedy is a refreshing insight into the tales that comprise Greek mythology.

It strikes a healthy balance that extends to the nature of the jokes themselves. The writing feels a lot like classic episodes of The Simpsons, which were funny when I was a kid, but I only appreciated the full scope of as an adult. A lot of elements to the story feel like this, with some truly dark and raunchy humor masterfully masked by snappy innuendos.

I’d normally throw a podcast on in the background when exploring an endless open-world game such as this, but Zeus and Prometheus’ interjections were so enjoyable as Fenyx moves around the map that I ultimately forewent doing this in order to pay attention to their narration. Additional characters, such as the gods you meet along the way, including Hermes, who is frequently at your side, add to the brevity and texture of the world as well.

While Link’s adventure can feel somewhat empty and dry, Immortals is dripping with character and humor.

One aspect that Immortals improves upon from Breath of the Wild is its combat. Link was no slouch in his game, but Fenyx is on another level with her weapons and abilities. With a sword for light attacks, an ax for heavy attacks, and a bow for ranged attacks, taking on the various mythological creatures is always fun, especially as you evolve your abilities and become more powerful. Monsters that prove difficult early on can be easily swept aside later in the game, with new beasts taking their place at the top of the food chain.

One of the key elements of Breath of the Wild was its shrines, and while the discovery of the vaults in Immortals isn’t as robust, the puzzles and combat challenges found in them are.

They also can be on a scale unmatched by anything in Breath of the Wild, particularly the ones that revolve around main quests, which provide multiple levels and objectives within them, giving the player a reason to return to a vault even after obtaining the bolt of Zeus’ lightning at the end.

Taking on the various mythological creatures is always fun, especially as you evolve your abilities and become more powerful.

The need to unlock abilities can be annoying, as sometimes I wonder if a hidden chest is only obtainable once Fenyx gains a new power or if I just haven’t figured out the puzzle yet. This problem subsides as the game progresses, as you will eventually have all the tools at your disposal, but might leave a slightly bad taste in your mouth in the initial hours.

Immortals Fenyx Rising injects both the best and worst aspects of Ubisoft open-world games into the DNA of The Legend of Zelda: Breath of the Wild. While the shortcomings can occasionally get in the way of its enjoyment, the game is so vast and colorful that the more I played, the more I forgave those flaws. Ubisoft has a fantastic new franchise on its hands that feels tonally unique and will undoubtedly get better with future installments.

The Legend of Zelda: Breath of the Wild still has one of the best-realized open worlds, and Assassin’s Creed Valhalla has more refined combat.

Simply following the story content will result in around 30 hours of gameplay, with that playtime doubling to around 60 hours when including a healthy portion of side content and ballooning even more for completionists.

Yes. It’s a colorful, charming open-world game, though players who already grabbed Watch Dogs: Legion and Assassin’s Creed Valhalla may be understandably burned out on the formula by this point.

The OnePlus 10T just leaked with a few disappointing changes

EA wants your help to test the next Skate game

Windows 11 adoption is booming after months of stagnation