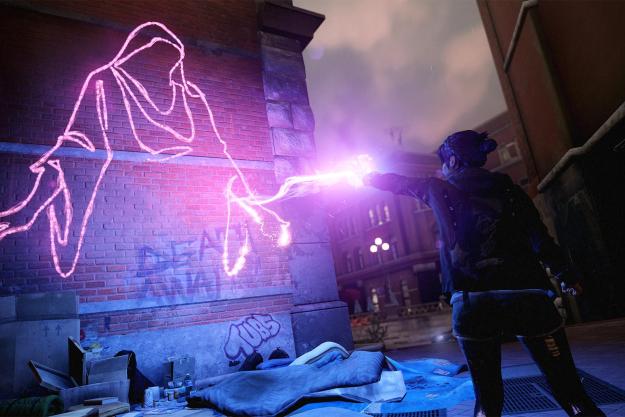 “Infamous: First Light is all gameplay no heart. The action that made Second Son feel so tight is back, but it lacks the earlier game's excellent story and design.”

When you’re trimming the fat off a nice cut of meat, you have to cut artfully. The gristle needs to go, but lop off too much and you needlessly waste some tasty steak. The same rules apply to carving a massive game down into a standalone prequel. Unfortunately, the ragged edges around Infamous: First Light expose an overzealous butcher. The fundamentals that made the whole cow so appealing in Infamous: Second Son remain, but Sucker Punch cut a little too deeply here.

The story journeys back to Seattle, but this time, players get to streak across the city as Fetch, a mere supporting character in Second Son. In a refreshing reversal of roles, her brother Brent is a dude-in-distress, forcing our new hero to team up with the scummy Shane, an old business associate of Brent’s who knows what kind of trouble bro is really in.

Sucker Punch cut a little too deeply in paring this standalone prequel story down to size.

Neon is the glue that binds this DLC to the game that it spawned from. It was a thrilling superpower that brought a whirl of color to Second Son, and little has changed here with regard to how it works. Light Speed is still your go-to move for getting around; press the O button to transform Fetch into a shifting mass of neon light that zips around streets, rooftops, and the sides of buildings for as long as your finger remains on the button. It continues to be one of the most energizing approaches to traversal that we’ve encountered in an open world game, even if it’s not quite as fresh on a second outing.

The familiarity of Fetch’s powerset is definitely noticeable, but it’s at least justified by the narrative. Second Son protagonist Delsin Rowe absorbed his Neon powers from Fetch, so the similarities make sense. But there are a few subtle changes as well. Infinite Light Speed is unlocked by default here, for example, and up to two air dashes can be unlocked in the DLC’s skill tree. The rapid-fire unlock for Delsin’s version of the Neon Beam attack is replaced here by an upgrade that turns the power into a legitimate machine gun-style attack.

As enjoyable as it is to dig into an adventure based around Fetch and her Neon powers, the story and the playable content that supports it could use some work. We know from the events of the earlier game that Fetch – her given name is Abigail Walker – set up shop as a drug dealer-hunting vigilante in Seattle. It started after she escaped detention at the hands of the government organization charged with protecting the world from superpowered Conduits, or “bioterrorists” as they’ve been labeled. Her brutal take on vigilantism is connected to her brother’s death, but that’s as far as her development went in Second Son.

First Light is a story told in flashback, with Fetch incarcerated by the Department of Unified Protection (DUP) and sharing her story with DUP head Brooke Augustine, the main antagonist of Second Son. New facets of Fetch’s Neon powers present themselves with each new chapter of the story. You spend some time running around Seattle in flashback, then return to the DUP holding facility where a new ability is revealed and tested out in Augustine’s “Danger Room”-like training arena.

The plot follows that back-and-forth format until the flashback catches up to the present. The final bits lead Fetch right to where we find her in Second Son. It works well enough as a mechanism for introducing new powers – Fetch hides the extent of her abilities from Augustine until the events of the narrative she’s sharing force her to reveal them – but the development of the story and its characters is extremely thin.

Even for a light, comic book-style story about superpowers and shadowy government intrigue, we are woefully light on character development. The black-and-white morality that defines choice in the core series of Infamous games would be better than this; at least characters grow and change. First Light eliminates choice completely, and leaves us instead with two characters that bicker about their dueling ideologies. Fetch craves freedom, Shane craves power. The end.

The characters at the heart of what’s going on are just too one-dimensional to care about.

The gameplay is similarly light on nuance. Infamous: First Light serves up a good four to six hours of game, but there’s a lot of repetition going on in the way its mission challenges are designed. Defend this truck. Fight this bunch of dudes. Save some hostages. It feels less like you’re working through the events of a story and more like … well … more like you’re playing a video game. As much as that’s the raw truth of what you’re actually doing, First Light doesn’t make enough of an effort to contextualize its play sequences against a story you’re invested in.

The secondary tasks scattered throughout the city suffer from a similar disconnect. The only one that really works is the Battle Arena that unlocks as a separate mode as you take down Augustine’s training exercises. Second Son owners even get the bonus of being able to use Delsin in the extra mode as well. Graffiti minigames return in the city proper, a baffling choice given that Delsin is the notorious street artist of the Infamous cast. Fetch left her mark here and there in Second Son, but she’s never been established as a tagger; her graffiti served a narrative purpose before. It’s out of place here.

There are also Lumens to collect or chase down which, much like Second Son‘s drones, create a convenient collectible to chase for skill points. It makes sense that Sucker Punch would stick to the same collectible-driven upgrade path in First Light that it did before, but here again, the story doesn’t really sell it. Early on, Fetch releases a thick cloud of neon gas that disperses across the city and forms into these Lumens. She knows that collecting them will power her up … because of reasons. Just don’t worry about it and collect all the shiny bits, OK?

Turning back to our trimming-the-fat metaphor, there’s just too much missing here. Sucker Punch clearly knows what worked so well in Second Son; for all the repetition in the mission design, there’s a base level of fun here that can’t be ignored. But the cuts go too deep. There’s nothing to latch on to, no purpose to justify the existence of this prequel story. Infamous: First Light gives you another reason to run around and raise hell in a virtual Seattle, but it’s the sort of one-and-done experience that the series as a whole has always successfully avoided.

This game was reviewed on a PlayStation 4 debug console using pre-release review code provided by Sony.

Best PS Plus deals for August 2022

PlayStation Plus is adding the Yakuza series. Here are what tiers you’ll need