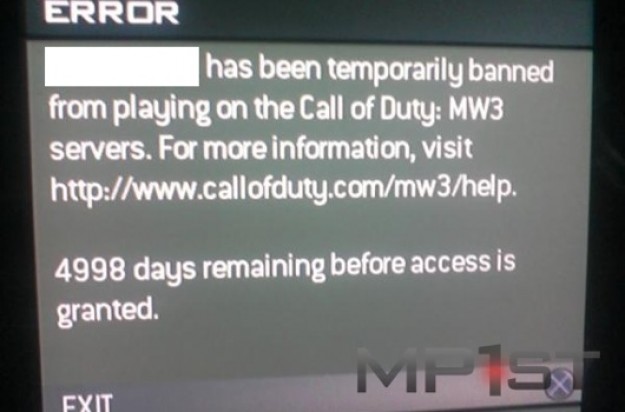 The next time you find yourself in an online match of Call of Duty: Modern Warfare 3 and you see someone doing something that is obviously cheating, pray for their digital souls because Infinity Ward may soon swing its mighty ban hammer at them.

In an effort to keep the games clean of hackers, Infinity Ward has decided to impose 5,000 days bans on anyone caught doing “something bad,” according to Infinity Ward’s Robert Bowling.

“Player Banned for 5000 days?! Yes. If you see this message, it means you’ve been Permabanned (for something bad),” Bowling tweeted.

While it is technically a “temporary” ban of 5,000 days–or 13 and a half years–it is being called a “permaban,” and rightly so. Bowling did not specify exactly what will earn you a thwack with the might ban hammer, but some have already felt its cold embrace, as evidenced by the picture above posted by MP1st.com.

Few things can ruin a game experience faster than someone that cheats at an online game. It is a fact Infinity Ward knows well, and the developer is not alone. Earlier this year EA dropped the hammer on hundreds of cheaters as well.

So in other words, this holiday season, consider Infinity Ward to be like Santa. And not the jolly, happy old man that brings toys, but the other Santa that knows when you’ve naughty.