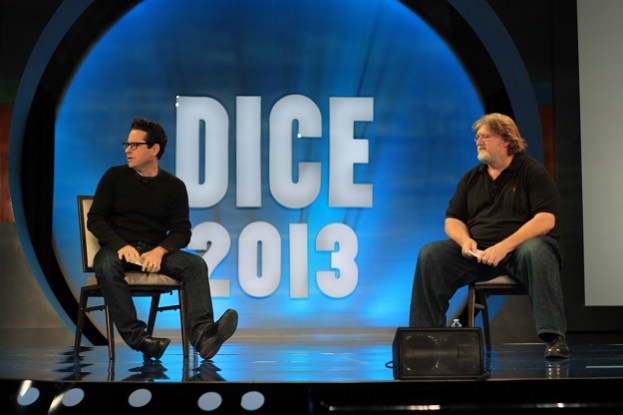 How about this for a high-concept pitch: JJ Abrams’ Bad Robot and Gabe Newell’s Valve Corporation come together to collaborate on both games and film. Outlandish, right? A few years back it would be the stuff of fanboys’ dreams. Today not so much, not anymore.

“We decided that we need to do more than talk,” Newell said. There are no specific details to share just yet, but the Valve boss dropped that little nugget at the tail end of his keynote chat with J.J. Abrams at the D.I.C.E. Summit.

D.I.C.E., or the Design Innovate Communicate Entertain Summit as it is properly known, began today in Las Vegas. Abrams and Newell kicked off a week that will be filled with presentations from some of the biggest names in gaming, as they take to the stage to discuss the future of the industry. The show will play host to industry giants like Warren Spector, Ouya’s CEO Julie Uhrman, the President of Original Programming for SyFy Mark Stern, Sledgehammer Games co-founder Glen Schofield, Frank O’Connor and Kiki Wolfkill from 343 Industries, and many more. Check back with us throughout the week for coverage directly from the floor in Vegas.

“There’s an idea that we have for a game that we’d like to work with Valve on,” Abrams said, thus sparking what is sure to be an epic amount of speculation on the Internet.

It seems, based on their brief comments on the matter, that this partnership extends beyond a single project. Valve has made no secret of its interest in film, while Bad Robot has been loosely involved with several games, including the upcoming Namco Bandai Star Trek developed by Digital Extremes, which is being considered an official part of the rebooted Star Trek universe that Abrams helped create.

“We’re super excited about that, and we’re also interested in working with you guys on movies,” Newell stated in response to Abrams. “So, we’re going to try to figure out if we can make a Portal movie or a Half-Life movie together. It’s really time for us and for our industries to stop talking about potentials and try to really execute them.”

Neither Abrams or Newell are doing interviews at the conference, but check back later for a more complete rundown of the entertaining and enlightening keynote.