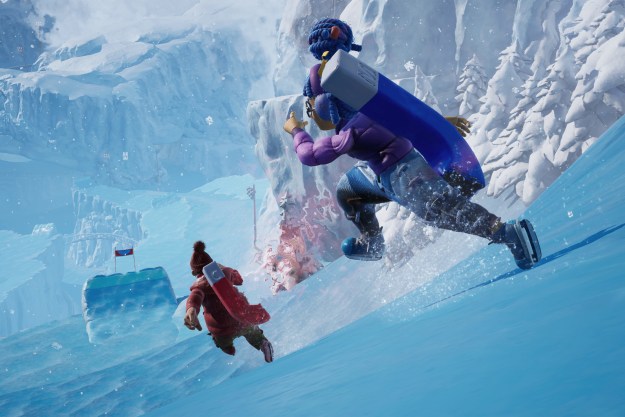 “It Takes Two is a charming co-op adventure that combines the best ideas from Nintendo and Pixar.”

While video games can cover a broad range of genres, there’s one frontier that remains mostly uncharted: The romantic comedy. Co-op platformer It Takes Two shows just how much we’ve been missing out on thanks to the gaming industry’s fear of cooties.

The EA-published adventure is the latest project by multiplayer studio Hazelight and director Josef Fares, the eclectic director behind A Way Out. Rather than dishing out grim sci-fi or high fantasy, It Takes Two is an unabashed rom-com about the restorative power of communication and teamwork. Imagine a 12-hour couples therapy session by way of Astro’s Playroom.

It Takes Two is a labor of love that has the heart of a Pixar movie and the soul of a Nintendo platformer. Even the most hardened gamers may find themselves falling for the most inventive co-op game since Portal 2.

It Takes Two doesn’t begin with a traditional meet-cute. Instead, it opens with a couple on the verge of divorce. Cody and May are a bickering married couple who decide to call it quits. When they break the news to their daughter, she does what any confused child would do in the situation: Accidentally traps her parents in the body of two tiny dolls with the help of a magical book.

What follows is a vibrant adventure where the former lovebirds must work through their problems, which have physically manifested into platforming challenges. The game takes full advantage of its magical realist premise to playfully transform domestic squabbles into clever video game tropes. That broken vacuum Cody was too lazy to fix? It’s become a Bowser-sized boss. The pesky wasp’s nest in the backyard? The pint-sized couple has no choice but to go to war with them in a mini third-person shooter.

The game’s most direct comparison isn’t another platformer, but Pixar’s Inside Out. Both feature the same brand of illustrative storytelling that uses cartoony set pieces to underscore real experiences. Like a great Pixar movie, It Takes Two boasts memorable characters, moving emotional beats, and the occasional comedic wink that parents will pray their kids didn’t understand.

The story can get narratively scattershot at times. There are a lot of rapid-fire gameplay ideas happening at every level that don’t always sync up to a relationship parallel. Plot threads seem to come out of left field to justify moving the game to a snow-themed level or an elaborate musical set-piece. Fortunately, every new mechanic is so pleasurable that it hardly matters how effective the game is as a therapy session.

Despite the cinematic comparisons, the game works as well as it does because of its interactivity. Lots of romance stories tell audiences how important teamwork is, but It Takes Two puts physicality to those life lessons. The game can only be played with another human partner, so it requires actual unity to complete. Players learn to communicate and build their trust in one another alongside May and Cody.

It’s a high-concept idea that is delivered with finesse. As a platformer, the running and jumping feels as good as a Mario game. The puzzles are rarely challenging, but the solutions are ingenious enough to inspire satisfying eureka moments. The levels themselves offer a constant barrage of fun ideas that never overstay their welcome. As soon as players could find themselves bored with a traditional platforming puzzle, it swaps over to a mini-dungeon crawler that’s completely different and just as enjoyable.

What’s most impressive is how much thought has gone into creating a co-op game that actually cares about both players. May and Cody get completely different tools to play with in each level. In the opening chapter, Cody gets a set of nails that can be shot into wooden walls while May gets a hammerhead that she can use to swing on those nails. The mechanics and utility of each item are completely different and give each player their own unique experience. There’s never a point where it feels like player one got the “cool” item and their partner is a sidekick.

What’s most impressive is how much thought has gone into creating a co-op game that actually cares about both players.

That’s something that many co-op games really struggle with. Nintendo infamously neglects player two by either making them a mechanical clone of the protagonist or a helper with limited functionality. It Takes Two is fully designed with both sides of the split screen in mind and it always makes sure to alternate who gets their big hero moment.

That’s another thing that the game gets right about relationships. Both Cody and May are equally important to the dynamic. Players need to collaborate to bring the characters together, but they are never left standing around while their partner has all the fun. The give and take is never at one person’s expense.

Before the game’s release, EA held a Q&A with director Josef Fares. He had one choice phrase he repeated multiple times when asked about his approach to game design: “No shiny shit.”

Fares went on one of his signature rants against the concept of “replayability” and emphasized that It Takes Two didn’t feature hollow collectibles. Instead, his aim was to make an interactive world that was fun to explore without arbitrary hooks.

There’s a sense that Fares is just having a blast designing every little interaction.

That philosophy is evident throughout the game’s nine distinct levels. When players find themselves high up in a tree, they can stop to toss a stray paper airplane. There’s no real incentive to do it; it’s just for the love of the game. That’s a breath of fresh air in the era of the open-world “map game” where players are given a repetitive checklist of tasks to complete.

The closest thing the game has to “collectibles” are minigames scattered throughout every level. These are simple competitive challenges like tug of war or snail racing that give players a light break from the story. While they aren’t complex side-quests, they offer a good excuse to break up the pace and let partners blow off any potential frustration that’s brewed between tricky co-op miscues.

There’s a sense that Fares is just having a blast designing every little interaction. The director is notably in love with his own games and that attitude is infectious. While his previous works can feel a little too self-serious, It Takes Two is a fuller representation of both his colorful personality and the immense skill level over at Hazelight. He jokes (probably) that he’ll give anyone who doesn’t love the game $1,000. As much as I’d love the money, I’m certainly not going to ask him to pay up. He wins this bet.

It Takes Two is Hazelight and Josef Fares’ most fully realized vision of co-op gaming yet. It uses clever interactivity to highlight the importance of good communication in video games and relationships alike. With Nintendo-quality level design and a charming story to motivate its platforming action, It’s the rare multiplayer game that will strengthen friendships rather than end them.

No. It Takes Two is easily the best co-op game of its breed since Portal 2.

The adventure clocks in at a surprisingly lengthy 10-12 hours. May and Cody get completely different abilities each level too, which makes a second playthrough feel very enticing.

Yes. It’s a joyous time from start to finish and it comes with a Friend Pass, which gives one of your pals a copy of the game. It’s a two-for-one deal that makes sure you’ll have someone to play with.

Topics
The best upcoming PS5 games: 2023 and beyond
The best PSVR games for 2023
The Elder Scrolls Online’s 2023 updates bring players back to Morrowind
The best Fire Emblem games, ranked from best to worst
The best RPGs for the Nintendo Switch
How to link your Fire Emblem Engage and Fire Emblem Heroes account
Xbox and Bethesda’s Developer_Direct: how to watch and what to expect
Goldeneye 007 comes to Game Pass and Nintendo Switch later this week
The best iPhone games in 2023: 31 games you need to play right now
I can’t believe I’m recommending Forspoken on PS5 over PC
Redfall’s May 2 release date revealed during Developer_Direct
Xbox just surprise announced and released a stylish new Game Pass title
How to cheat in Words With Friends