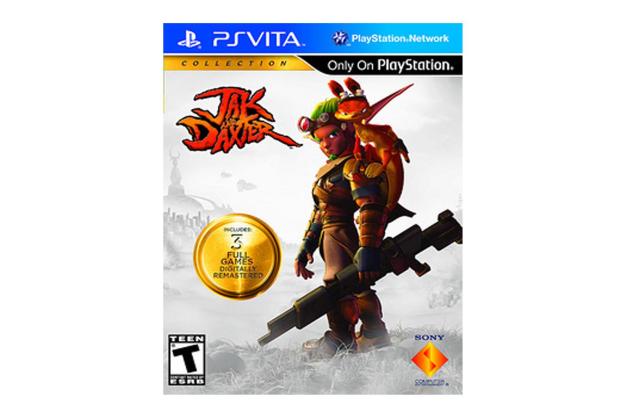 “A great trilogy finds itself diluted on the Vita, but still offers a lot”

Since its debut 16 months ago, the PlayStation Vita has amassed a library of around 100 games. If you say it quickly enough, that actually sounds like a good, healthy amount of titles to select from, and hey, who wouldn’t want to rush to buy Let’s Fish! Hooked On. A closer look at the library paints a more anemic picture, however. Many Vita games are indie titles of varying quality (to be fair, a few are excellent), while others are curtailed ports of platform releases. The Jak and Daxter Collection falls right into this latter category. It isn’t original or exclusive to the Vita, all three of its included games are dated, and there are some technical limitations. That said, it still has a lot to offer Vita owners hungry for software.

If you are considering picking up the Collection, check out our review for the PlayStation 3 version. In terms of content, the two Collections are identical, and the Vita version comes with the trio of PlayStation 2 games we saw in the PS3 re-release: Jak and Daxter: The Precursor Legacy, Jak II, and Jak 3. All three titles have been shined up and look better than the original releases from 2001, 2003, and 2004, respectively, although the Vita port is not as crisp as the PS3 port.

You shouldn’t expect miracles when it comes to HD re-releases like this, especially on games that are roughly a decade old. Jak 1 was created with a cartoon-inspired look and feel, so it upgrades better than most; it won’t ever be mistaken for a current gen game, but it is eminently playable.

The second game in the series actually fares worse. It is sharper-looking than the first game overall, but backgrounds and character models are occasionally muddy and rough. Frame rate is also an issue. It would be easy to write these issues off as the cost of upgrading older games, but the same problems aren’t as prevalent on the PS3 version, so it is a Vita issue. The third game is the best-looking of the three, but the frame rate struggles there as well, and a poorly optimized aspect ratio cuts content off at the sides and top of the screen.

That said, despite the step down from the PS3 version, all three games look passable on the Vita. The controls are a bit more of an issue.

The first game is troubled by a bizarre lag on certain button inputs, especially – and significantly- when you double jump. The first jump is responsive, but the second lags. This requires you to adapt to an unfamiliar and awkward rhythm. You grow accustomed to it eventually, but you’ll have to really, really want to play this game to get used to it. This issue is specific to the Vita version.

The second and third games are smoother, but they have a noticeable, and really poor decision plaguing them: the camera. In fast-moving platforming games, the camera is rarely your friend. At the height of the era of PS2 platformers, it could be downright homicidal. In this port’s second and third Jak games, the troublesome camera has a new accomplice: the rear touchpad.

Since the Vita doesn’t have the second set of shoulder buttons that a PlayStation controller does, the developers at Mass Media Inc. mapped those buttons to the back – touching the left side brings up the HUD, while touching the right switches you into an immobile first-person perspective. You can look around, but not move.

It’s a useful feature if you are looking over a complicated path or hunting for secrets, but not so much when you are running and your hand accidentally brushes the back of the Vita, stopping Jak dead in his tracks. Doing so while trying a series of tricky jumps will almost always kill you. It is not just a bad decision, it makes the game worse and it can’t be turned off.

The Jak and Daxter trilogy is a classic for a reason. The stories are fun and the worlds are massive. It’s the series that launched Naughty Dog into the spotlight and paved the way for its more ambitious titles like the Uncharted series and The Last of Us. The Vita port of the PS3’s HD remake shows you a hint of why these games were so well received, but it also introduces its own, unique problems.

The issues aren’t insurmountable, and the original design often shines though. But if you really want the Jak and Daxter HD experience, the PS3 version is the way to go. There is something to be said for having the trilogy on the go, and the $30 price tag isn’t bad for three full games. You’ll just need to overlook a few major flaws to enjoy them.

This game was reviewed on a PlayStation Vita using a copy provided by Sony.